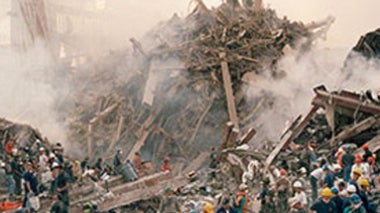 What Was in the World Trade Center Plume? [Interactive]

Ten years later, what exactly residents and rescue workers were exposed to remains at least a partial mystery

The Next Attack? Terrorists' Attempts to Hijack Technology

From hacking infrastructure to a detonating a nuclear "dirty bomb," what are the most likely next terrorist attacks?

Preventable Deaths: Is U.S. Domestic Security and Public Health Spending Out of Balance?

A look at how much the U.S. has spent through Homeland Security since 9/11 and what the government spends on preventing deaths through public health

Shaping Up: 10 Engineering and Design Facts about One World Trade Center [Infographic]

What was once called the Freedom Tower should soon become the tallest building in the U.S. It will also be among the best prepared in the nation for a terrorist attack or other emergency...

The Lower Manhattan Security Initiative has covered much of the city with a network of surveillance cameras and other equipment, to the dismay of privacy advocates

Yes We Scan: Have Post-9/11 Airport Screening Technologies Made Us Safer? [Slide Show]

How Young Children Learn about Terrorism and 9/11

What have we learned about the way children understand and process major events--even if they, themselves were not alive to have experienced them?

How Accurate Are Memories of 9/11?

Recollections of the circumstances of how we first heard of the 2001 terrorist attacks may feel extraordinarily vivid and true, but they are flawed

Commemorative Calculus: How an Algorithm Helped Arrange the Names on the 9/11 Memorial

Underlying the memorial's seemingly random layout of nearly 3,000 names is a complex and deeply human order

Science after 9/11: How Research Was Changed by the September 11 Terrorist Attacks

New work in forensics, biodefense and cyber security blossomed after the attacks on New York City, Washington, D.C., and in the skies over Pennsylvania, but increased regulations have also stymied international collaboration as well as work on some infectious diseases...

The U.S. Defense Department has added thousands of automated aircraft added to its fleet over the past decade to support operations in Afghanistan, Iraq and Pakistan as concerns of drone accuracy persist...

Did the U.S. Overreact to the 9/11 Attacks? Undoubtedly

A decade ago I was wrestling a paragraph in my home office when my wife called out from another room, alarm in her voice. The music station she was listening to had interrupted a song to announce that a plane had flown into the World Trade Center...

A decade ago, we lived in an apartment tower in Jersey City overlooking the Hudson River. We had a panoramic view of Manhattan—and of planes flying in and out of the nearby airports.

How the Brain Remembers 9/11

When the first plane hit, I was literally shaken out of the shower. What was that? I remember the precise look on my roommate's face when I walked into the living room of the tiny tenement-style apartment we shared on the Lower East Side of Manhattan, about a mile from the World Trade Center: a mix of bewilderment, disbelief, and only a touch of the sarcastic smirk he typically wore...