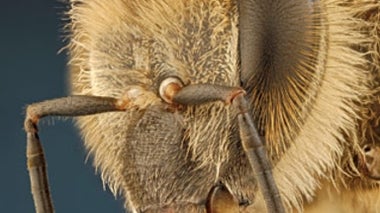 Solving the Mystery of the Vanishing Bees

The mysterious ailment called colony collapse disorder has wiped out large numbers of the bees that pollinate a third of our crops. The causes turn out to be surprisingly complex, but solutions are emerging...

Plan Bee: As Honeybees Die Out, Will Other Species Take Their Place?

In a race against time, researchers propagate native solitary bees as an alternative to our most important pollinators

Home sweet home: Not all honeybees work far afield--some are making honey high in the rooftops

Why do bees buzz?

Searching for What's Behind the Bee Decline

One million of the 2.4 million U.S. honeybee colonies perished last winter. What's behind the die-off is still a mystery, but one researcher plans to spend this summer gathering clues

Exploring Consciousness through the Study of Bees

The Xerces Society for Invertebrate Conservation last week petitioned the U.S. Department of the Interior to protect seven Hawaiian bee species under the Endangered Species Act.

The Curious Case of Bees

Honeybees: A European import vital to food production--or are they? David Biello reports

Is Life Too Hard for Honeybees?

Researchers zero in on the culprits behind colony collapse disorder