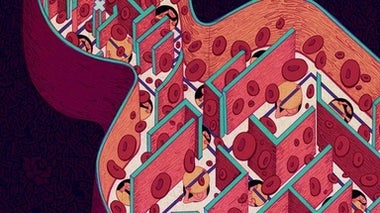 A flow of ideas to stop the bleeding

A Primer on Haemophilia (Graphic)

People with the inherited bleeding disorder haemophilia lack factors that cause the blood to clot. The disease affects thousands of people around the world and has even played a part in historic events...

In the Fight against Haemophilia, Dogs are a Weapon

In the study of haemophilia, man really does have a best friend

The Search for Genetic Treatments for Haemophilia Is Proving Difficult

Repairing the faulty genes that cause haemophilia could ultimately cure the disease, but it will be a tough challenge

Haemophilia's Crippling Joint Pain Is a Target for Scientists

Lettuce Pills (You Heard That Right) May Help Treat Haemophilia

History explains why people with the malady, and their physicians, are cautious to believe that a cure is in sight