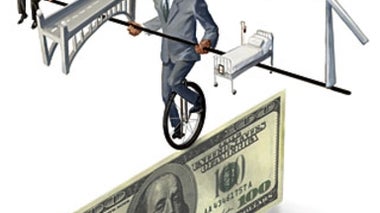 How Obama Can Boost the Economy by Investing in Science

Above It All: A Satellite's-Eye View of Pres. Obama's Inauguration [Slide Show]

Tech-savvy Pres. Barack Obama quickly revamps the chief executive Web site, but finds that when it comes to technology at 1600 Pennsylvania Avenue, change (such as laptops for his staff) will come more slowly...

In his inaugural address today, Pres. Barack Obama underscored his campaign promises to reform health care and develop alternative energy. Here are some excerpts, from the prepared text:

“Our health care is too costly; our schools fail too many; and each day brings further evidence that the ways we use energy strengthen our adversaries and threaten our planet … ...

Is Obama right that technology can lower health care costs?

Millions of people in the U.S. and around the world watched the historic inauguration of Barack Obama as he vowed to rebuild and reunite a fractured nation facing war, economic turmoil and other major challenges...

Democratic lawmakers are calling for $80 billion in federal funds to be set aside to beef up the nation's Internet services, develop renewable energy sources and computerize health care records.

The investment would be part of the $825 billion American Recovery and Reinvestment Bill of 2009 [pdf] (which the House is expected to vote on the week of Jan...

Future of the U.S. Space Program in Obama's Hands

A decision must be made by the next chief executive soon on the space shuttle's fate, for starters

The Day After: Science in the Obama Administration

Stanford University biologist Sharon Long, a science advisor to the Barack Obama campaign, talks about science in the upcoming administration. Plus, we'll test your knowledge of some recent science in the news...

What is in store for environmental policy in the new Obama administration?

Is combating climate change worth the cost?

It's a topic that is likely to come up more and more after President-elect Barack Obama moves into the White House next week. Obama has said that preventing and reversing global warming will be a top priority in his administration—a change from the previous administration's stance that voluntary efforts would be enough—likely through a mandatory cap-and-trade scheme...

Retired Air Force major general Scott Gration has been asked to head NASA under President-elect Barack Obama, Space News and AFP are reporting. The news agencies each cite an unnamed source in pointing to Gration, an early Obama supporter who stumped for the candidate and gave military cred to the campaign...

Will DTV transition be delayed?

Lovers of analog TV may get a reprieve from the scheduled February 18 transition to digital television. President-elect Barack Obama wants to delay next month's nationwide transition, arguing that there isn’t enough money to back the program...

Chomping at the bit to Twitter, text and make cell phone calls from tomorrow's inauguration? You might want to limit your expectations: telecom providers say they're expecting record wireless and Internet traffic in the nation's capital, and are asking mobile users to wait until after the big event to start tweeting and calling, lest their messages get delayed and their calls met by busy signals...

Pres. Barack Obama yesterday put all pending regulatory changes made in the waning months of the Bush administration on hold until he has a chance to review them.