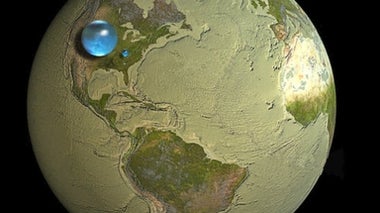 From space Earth is simply a pale blue dot. It's blue because of all the water on its surface.

Can Soil Sensors Save Georgia Waterways from Drought?

Improved but Not Always Safe: Despite Global Efforts, More Than 1 Billion People Likely at Risk for Lack of Clean Water

U.N. Development Goals for better drinking water have already been reached, but a closer look shows that the measures fail to truly account for the lack of access to safe water

Which Nations Consume the Most Water?

Much of the life-sustaining resource is traded across national borders

How Can We Cope with the Dirty Water from Fracking?

Fracking Could Work If Industry Would Come Clean

VANCOUVER—Resistance to hydraulic fracturing in the U.S. has risen steadily in recent months. Citizens and politicians are worried that fracking deep shales to extract natural gas can contaminate groundwater, trigger earthquakes and release methane, the potent greenhouse gas, into the atmosphere...

Book Review: The Future of Water

The Future of Water: A Startling Look Ahead, by Steve Maxwell, with Scott Yates, Published in 2011 by the American Water Works Association, Denver Colo., ISBN 978-1-58321-809-9 Full disclosure: I answered an open e-mail solicitation for reviewers of this new book and received a review copy for free in exchange for my promise of a published review...

Editor's Note: Students from Dartmouth's Thayer School of Engineering are working in Tanzania to help improve sanitation and energy technologies in local villages.

Getting to Know Your Water

That sound you do not hear is a half-million people not sighing in relief as the reservoir that slakes the thirst of the population of Raleigh, NC, and many surrounding smaller towns nears capacity for the first time in nearly a year.And on this World Water Day, when many turn their attention to the billions in the world who lack access to clean water, it’s worth reminding ourselves that those of us who do have access to water take it for granted shamefully...

A new "Green City, Clean Waters" plan aims to address water and climate issues, but it is not inspiring much brotherly love among some

There were a lot of interesting panels and sessions at this weekend's Texas Tribune Festival. A lot of nuggets of information, some good dialogue back and forth about energy and environmental policy in Texas...

Clean Dirty Water with the Sun

As demand for freshwater soars, planetary supplies are becoming unpredictable. Existing technologies could avert a global water crisis, but they must be implemented soon

Is water on the public's mind? Not really. Not yet.

This is the question that bounced around my head after I read through the results of the latest Energy Poll out of The University of Texas at Austin.

Gee Whiz, Why Not Recycle Urine for Drinking Water?

The U.S. can no longer afford to ignore sewage as a source of drinking water, scientists argue. David Biello reports

Water Filtration System in a Straw

How Much Water Do Nations Consume?

Population drives demand, but so do water-intensive foods such as meat

How Can We Ensure Clean Water for All? [Slide Show]

An exhibition of inventions, artwork and artifacts explores our relationship with water and how the world might cope with future scarcity of this invaluable resource

Top 10 Water Wasters: From Washing Dishes to Watering the Desert

The many ways we squander water, from unintentional leaks to outright negligence