Oh dear—π day 2016 has gone by and I still haven’t memorized p in what I used to call the ‘‘elementary’’ way that I invented some decades ago. Somebody recently suggested the much better name ‘‘Chemical π.’’ What can I do to make sure I do it by next π day? I know— I’ll write an article called ‘‘Chemical π’’ for The Mathematical Intelligencer. Here goes:

Let me tell you how Chemical π starts. First, I should remind you that it was proposed by several chemists, including Andreas von Antropoff and Charles Janet, that what is now called the neutron could be regarded as an atom of the element of atomic number 0, which has been called Neutronium and assigned the chemical symbol Nn.

Chemical π is a way to learn π with lots of advantages.

Mnemo-technicians know that memorization becomes easier if one attaches ‘‘colorful’’ things to the items one is memorizing. In Chemical π, the chemicals are the color.

When I first learned π to 1000 places, I triumphantly finished ‘‘...1989’’ to my friend John McKay. He said: ‘‘What comes next?’’ I realized he had a point. It was odd to know everything about the first thousand decimal digits but nothing of the next ones. I decided to add an extra 10% as ‘‘play,’’ making 1100 digits and then 10 more digits as ‘‘play in the play,’’ making 1110 and another digit as ‘‘play in the play in the play’’ and then for the play in that I asked him to look up the next digit, not tell me what it was but just whether it was 5 or more so that I would know whether to round up or down. This led to 1111 digits and a bit (binary digit). With the chemical method, the rule is that a chemically pious person need only memorize digits 10n + 1 to 10n + 10 of π when IUPAC (the International Union of Pure and Applied Chemistry) has accepted a final name for the element of atomic number n. Happily this goes just a little bit further than the play-in-the-play-in-the-play method.

In this paper we abbreviate the cipher by omitting any initial letters U or u.

By 2010 IUPAC had accepted permanent names for the elements up to 112 (Copernicum) and a year later it recognized the names Flerovium (114) and Livermorium (116). On January 4 2016, IUPAC accepted that elements 113, 115, 117, and 118 have been constructed, but the institutions that constructed them still don’t seem to have chosen permanent names. 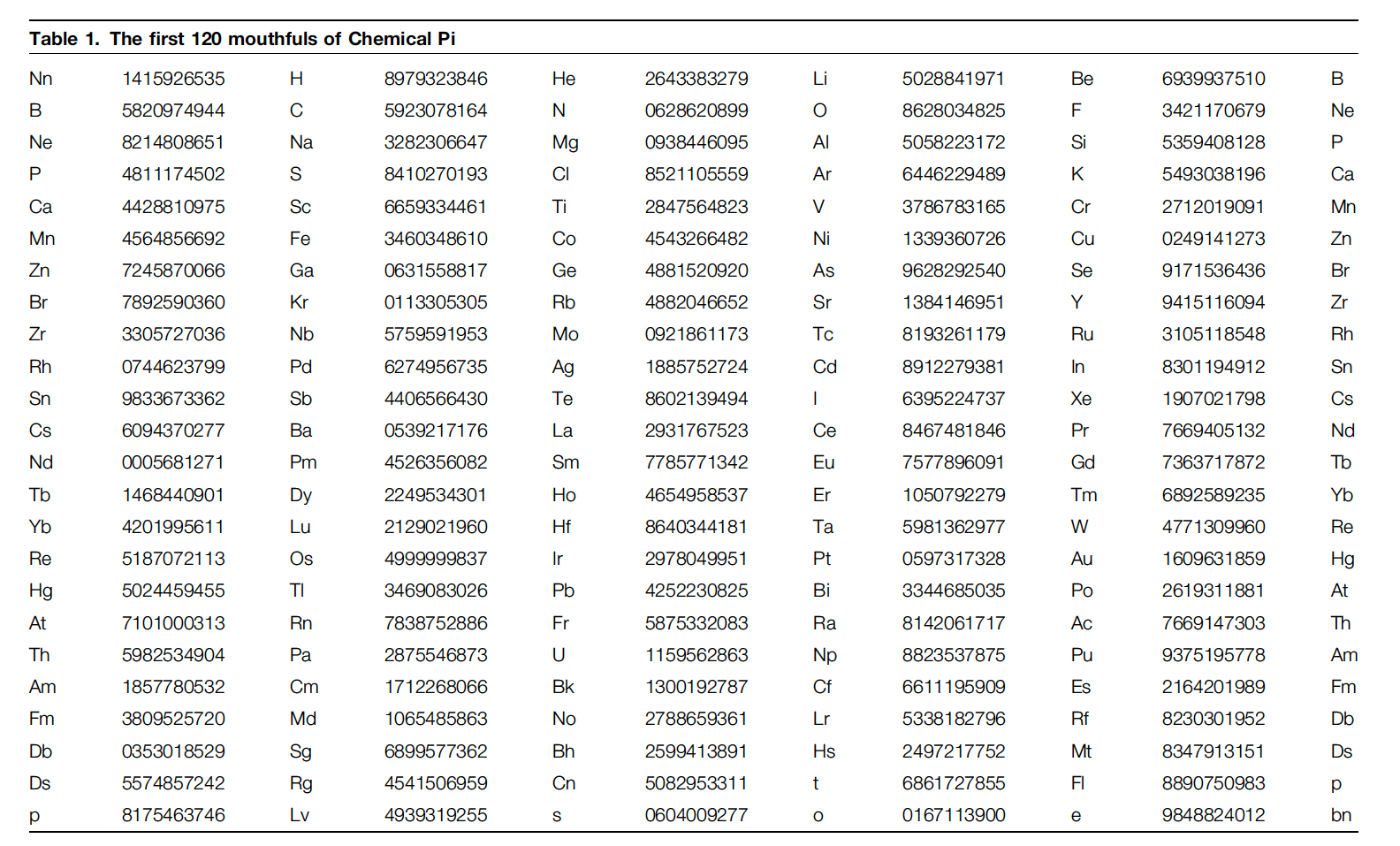 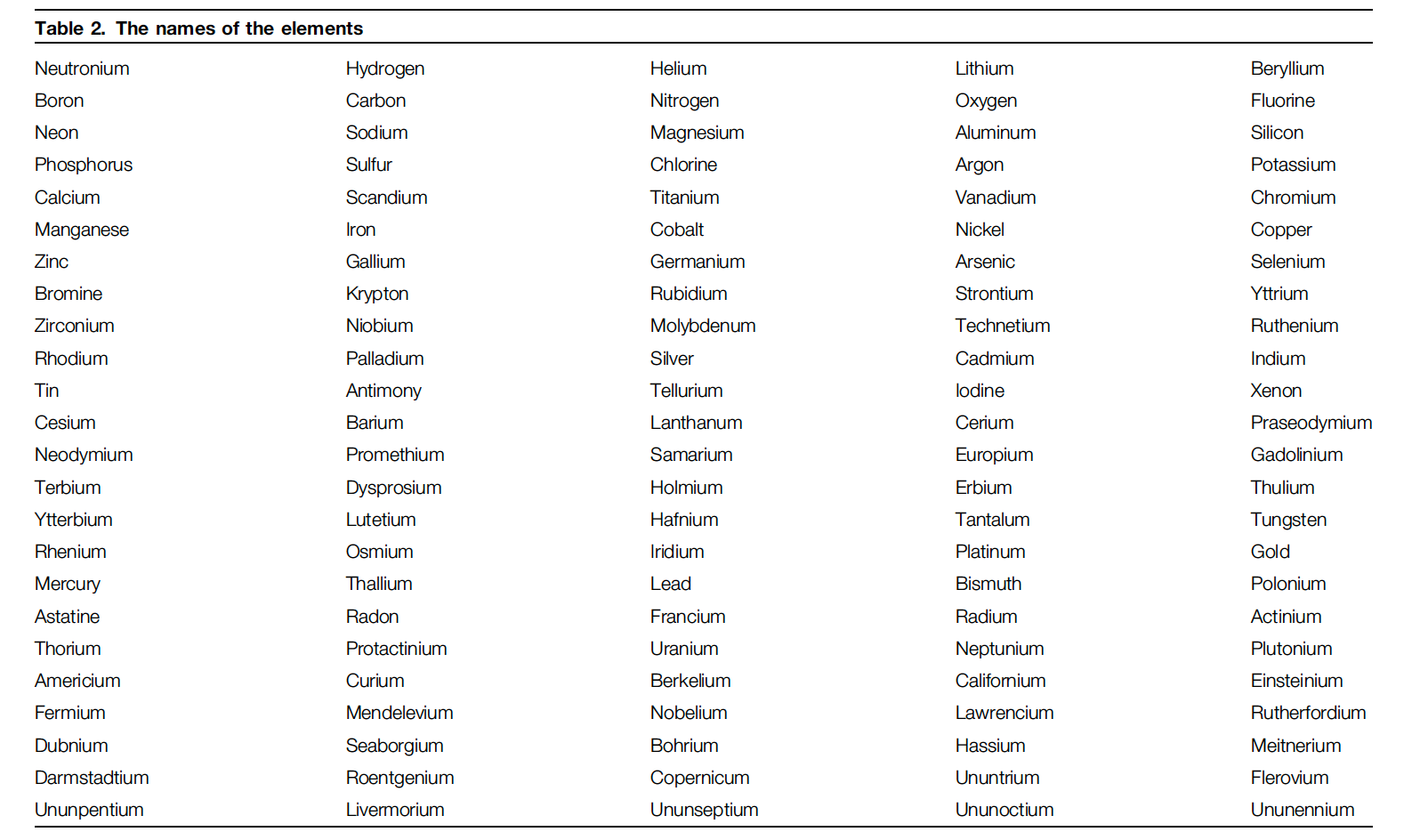 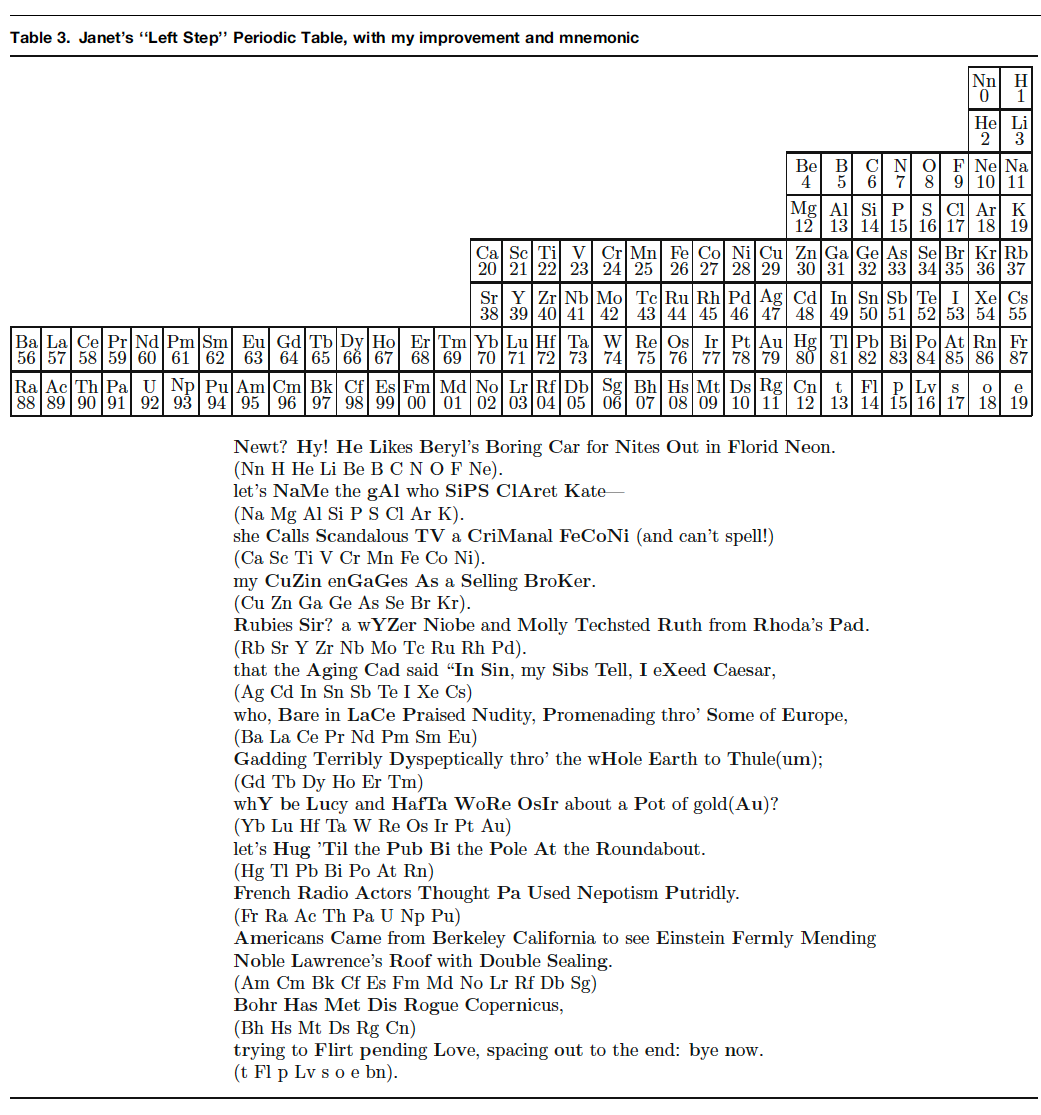 If Charles Janet was right in his prediction that the element with atomic number 120, provisionally Unbinilium, would be the last such element, many people competing in Pi Day celebrations could achieve chemical piety forever!

The nerds who read this paper will probably be interested in Janet’s ‘‘Left Step’’ version of the periodic table, even though it has no connection with the number π. I’ll describe my slight improvement of this table, which is printed in Table 3 with my mnemonic for the chemical elements it contains. It consists of two periods of length 2 = 2 x 12, two of length 8 = 2 x 22, two of length 18 = 2 x 32, and finishes with two of length 32 = 2 x 42. If started with hydrogen as Janet did, this takes us to element number 120, which he thought would be the last element to be constructed. However, this puts Helium in column 1 from the right and the other noble gasses in column 3 (again the right), and has other similar defects. These defects are cured if we start from Neutronium, when in particular the noble gasses form the column 2. This makes element 119 dislodge element 120 from the last place, which might suggest that 119 should be the last to be constructed. However, if element 120 is constructed, then it could be named Jt after Janet and the last mouthful would be Jt 8583616035 bu.

Is it perhaps not too much to hope that when celebrations start at 1.59 on future Pi Days, the pious might spare a thought for the modest inventor of Chemical Pi?

Now approaching its fortieth birthday, The Mathematical Intelligencer is a lively quarterly written in an engaging, informal style for a broad audience. It features expository articles about mathematics (broadly defined), about mathematicians (ditto), and about the history and culture of mathematics in its intellectual, social and scientific context. Puzzles, poetry and fiction appear in its pages too.

Recent Articles by The Mathematical Intelligencer