The past five years have brought a spate of astounding black hole observations: the first detection in 2015 of gravitational waves from the collision of two black holes; an unprecedented x-ray look in 2018 at a dozen black holes spinning around the supermassive black hole at the center of the Milky Way; and the first-ever photo of a black hole (at the center of the Messier 87 galaxy) in 2019. Nearly 100 years after Albert Einstein predicted their existence, the direct confirmations are rolling in and revolutionizing astrophysics.

The mere existence of black holes had been an open question, even until the 1990s—how the oldest and biggest ones could possibly have formed so soon after the big bang was particularly vexing. An unshakable belief that a monster supermassive black hole lurked at the center of our own galaxy was only vindicated after more than a decade of work by Nobel-winning physicists Andrea Ghez, Reinhard Genzel, and others.

Black holes exert a strong influence across the cosmos. Their immense gravitation creates the shapes of galaxies, and perhaps black holes themselves are the invisible dark energy in the universe. While locking in a swarm of clouds of dust around their cores, they feed on neutron stars and other luminary bodies that succumb to their pull.

The quandary of black holes is that they upend the very laws of classical physics that foretold their existence. At the event horizon, the boundary of a black hole, quantum physics breaks down, and quantum information is destroyed entirely or perhaps propelled from one coordinate in the universe to another via a wormhole connecting two black holes.

Sophisticated new technologies have brought us from theory and oblique measurements to direct evidence of black holes. That first image of the supermassive black hole in 2019 has been joined by observations of the light from merging black holes and of as yet uncategorized objects that might be black holes, neutron stars, or something else.

No new technology is ushering in the golden age of black holes faster than the gravitational-wave detectors. Their influence ripples through nearly every story in this collection, from the riveting tale of their first observations to their sensing of new classes of black holes and the so-called galactic factories that generate them.

Astrophysicists today have tremendous instruments and databases that give them an unprecedented look into the dark. But much remains unseen. Black holes are ubiquitous throughout the cosmos, yet they persist in shadow, leaving humanity to guess at and test their meaning, both from behind the telescope and in our imagination.

This article was originally published with the title "Golden Age of Black Holes" in SA Special Editions 30, 1s, 1 (March 2021)

On December 7 the Moon Will Photobomb Mars 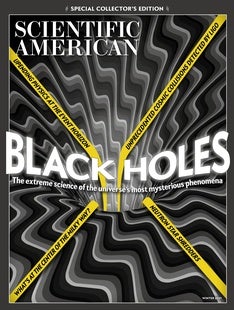