The muon is going mainstream. The particle, a heavy version of the electron that rains down on every square centimetre of Earth, is little known outside particle physics—and last year it helped archaeologists to make a stunning discovery of a previously unknown chamber in Egypt’s Great Pyramid.

Volcanologists and nuclear engineers are also finding new uses for the same technique, called muography, which harnesses muons to probe the innards of dense structures. The first companies are looking to cash in.

“The discovery in the pyramids last year has really put muography on the map,” says David Mahon, a physicist at the University of Glasgow, UK, who co-organized an international a meeting called Cosmic-ray Muography, sponsored by the Royal Society and held on 14–15 May in Newport Pagnell, UK.

Muons have the same negative charge as electrons but 200 times the mass. They are made when high-energy particles called cosmic rays slam into atoms in Earth’s atmosphere. Travelling at close to the speed of light, muons shower Earth from all angles. Every hand-sized area of the planet is hit by roughly one muon per second, and the particles can pass through hundreds of metres of solid material before they are absorbed.

Their omnipresence and penetrating power makes muons perfect for imaging large, dense objects without damaging them, says Cristina Cârloganu, a physicist at the Clermont-Ferrand Physics Laboratory in France. The denser materials are, the more energy they absorb from the particles, so physicists can track how often muons of different energies reach detectors placed around a target, and compare that with the expected rate without an obstacle, to build up a 3D profile of the density of the interior (see 'Muon Mapping'). 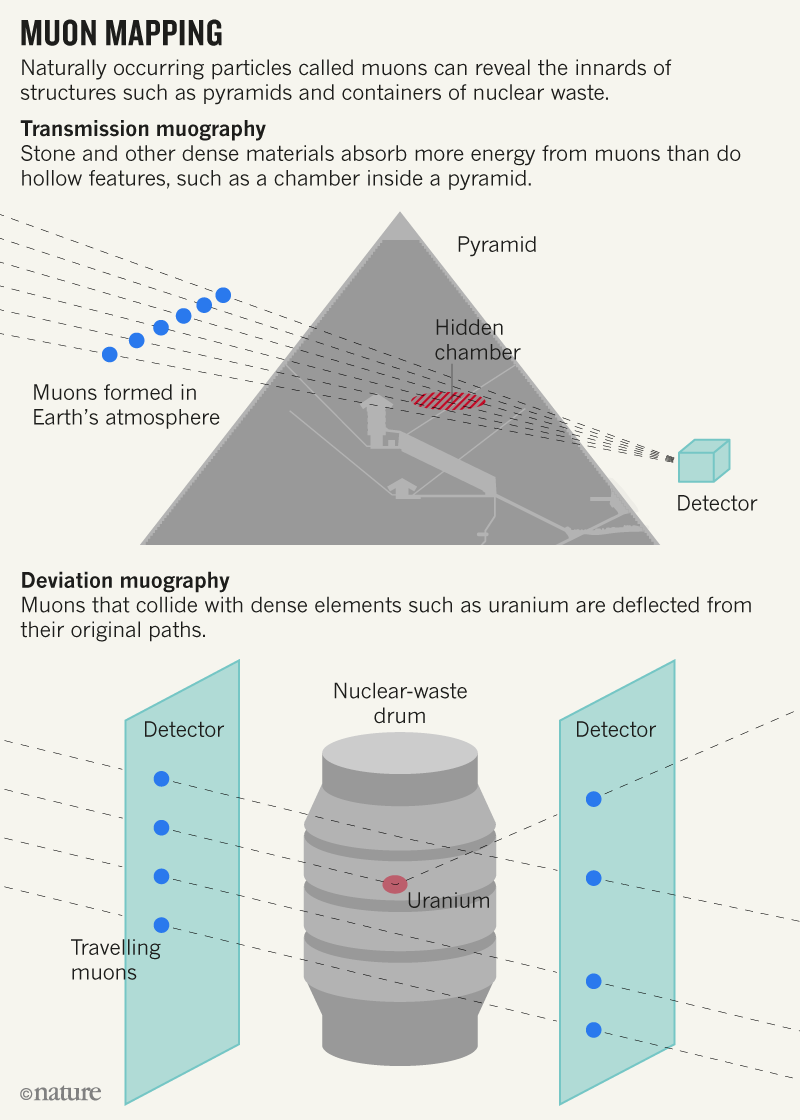 Physicists have been experimenting with the technique since the 1950s, including an unsuccessful search for hidden chambers in the second-largest pyramid at Giza. But the room-sized detectors were expensive and impractical, says Raffaello D’Alessandro, a particle physicist at the University of Florence, Italy, and a co-organizer of the muography meeting. They could weigh more than 10 tonnes and relied on muons’ ability to ionize particles of sometimes explosive gases.

Ways to track the paths of charged particles more precisely—developed at facilities such as CERN, Europe’s particle-physics laboratory near Geneva, Switzerland—have made for safer, smaller and more-sensitive muon detectors. They can now be as compact as a few square metres and can run on solar panels, making it possible to take them to remote field sites.

Volcanoes have become a popular target for the technique, thanks to pioneering work by researchers in Japan. Mapping lava channels, which absorb less energy from muons than does the dense surrounding rock, could one day help to predict eruptions, says Cârloganu. This year, researchers will try to image the solidified plug of lava inside Italy’s Mount Vesuvius. When combined with more conventional geophysical methods, these images could help volcanologists infer which parts would blow up first during an eruption, says D’Alessandro. He is part of the Muon Radiography of Vesuvius project, known as Muraves.

Smaller devices are also seeing use in archaeology, says Giulio Saracino, a physicist at the University of Naples Federico II in Italy. He and his team have mapped cavities and tunnels under Mount Echia, a settlement in Naples that has been occupied since the eighth century BC. They also plan to look for a rumoured aqueduct beneath the nearby ancient city of Cumae. And D’Alessandro is part of a team using muons to probe inside the walls of the dome of Florence’s fifteenth-century cathedral, which has developed cracks.

A spate of commercial applications for muography—five were presented at the conference—probe smaller samples, such as drums of nuclear waste. These applications often use a slightly different technique, which tracks how muons change direction when they hit atomic nuclei in a material.

By placing detectors on both sides of a sample, physicists can recreate a particle’s trajectory. And because the angle of deflection correlates with density of the substance the muon hits, studying these paths can help to create a density map of the material being probed. Doing this, engineers can spot stray fragments of uranium inside containers of nuclear waste, even if it is encapsulated in concrete or steel.

“To get information about what is deep in the centre, muons are pretty much the only thing that can do that,” says Mahon. Mahon is director of a firm called Lynkeos Technology based in Glasgow, which will start imaging nuclear-waste samples next month at the UK National Nuclear Laboratory at Sellafield. It will be the company’s first commercial contract.

In the United States, trials at the Los Alamos National Laboratory in New Mexico have found that similar technology can spot where fuel rods have been removed from casks of spent fuel. Just four stolen fuel rods would provide enough plutonium to build a primitive nuclear weapon, Los Alamos physicist Christopher Morris told the conference.

Israeli firm Lingacom, based in Tel Aviv, is also investigating using the technique in security screening, for example at border crossings, to inspect containers for smuggled nuclear material. Other firms plan to use muography to track the wear of oil-industry pipelines and search for minerals in old mines.

But in many academic fields, the technology is still greeted with shrugs and quizzical looks. Despite finds such as the Great Pyramid’s hidden chamber, the technology is still relatively unproven. “It’s a new, very specialist technique that comes from the high-energy-physics world,” says Saracino. “The first time I say to geologists that we have muon technology, they say, ‘What are muons?’ They are fascinated, but also a little bit wary.”

This article is reproduced with permission and was first published on May 24, 2018.

Elizabeth Gibney is a senior physics reporter for Nature magazine.

Beautiful Physics: The Search for New Particles at LHCb