In 85 B.C. or thereabouts, a Greek named Posidonius set sail on a curious mission. He was not carrying freight or passengers, nor was he engaged in warfare. He simply wanted to answer an age-old question: How deep is the ocean? Halting his vessel in the middle of the Mediterranean Sea, Posidonius coaxed his ships crew to let out nearly two kilometers of rope before a large stone attached to the end of the line nally hit bottom. He and his men must have been jubilant--at least until they realized that they then had to haul the great weight back onboard.

For the next 2,000 years, naval surveyors and oceanographers continued to use exactly the same laborious line-and-sinker method to probe the oceans' depths. It is not surprising that they made scant progress. Then, during the 1920s, oceanographers developed the rst echo sounders--instruments that could measure the deep water by bouncing sound waves off the bottom. With the wealth of measurements these devices provided, scientists got their rst glimmers of the true shape of the ocean basins.

In the past few decades engineers have constructed ever more sophisticated acoustic devices to speed the mapping of this hitherto hidden part of Earth. The major impetus for these developments initially came from concerns about national defense, but more recently economic considerations have taken precedence.

Beginning with the U.S. in 1981, the worlds maritime nations declared the waters and seaoor within 200 miles of their shores to be "Exclusive Economic Zones." To help assess the value of the vast undersea expanse claimed by the U.S., the National Oceanic and Atmospheric Administration began surveying parts of the newly annexed area in 1983. That effort (which continued until 1993) mapped more than 200,000 square kilometers of the seaoor off the coasts of the Atlantic and Paci c oceans and the Gulf of Mexico.

Over this same period, the National Science Foundation funded two smaller surveys to study parts of the seaoor near the coasts of New Jersey and western Florida. All the vessels involved used multibeam sonars, the most modern form of instrumentation available for measuring the topography of the ocean bottom.

These surveys provide unprecedented views of the countrys continental slope. Although no sunlight actually penetrates to these great depths, computers can render images of seaoor vistas as they would appear with the oceans drained. Such a perspective could be particularly valuable in planning industrial activities offshore. For example, submarine cables increasingly carry international communications, and petroleum producers are moving drilling platforms into ever greater depths of water. These enterprises require maps of where the seaoor appears to be stable--not prone to subsea avalanches or violent currents. Disposal of waste at sea also demands this information, because currents running along the bottom can disturb the sites where waste settles. Bottom surveys further help geologists to locate offshore fault systems and to assess their risk of triggering earthquakes.

On a broader scientific level, undersea mapping is providing fundamental knowledge about the geologic forces that shape the ocean oor. Images such as those we have created offer scientists a way to take in vast stretches of undersea terrain in a glance--an ability they have long enjoyed while studying the surface of distant moons and planets. That perspective now offers some fascinating new insights into the marvelously complex evolution of Earth.

THE AUTHORS
LINCOLN F. PRATSON and WILLIAM F. HAXBY have worked together and independently for many years probing the continental margins of the U.S. and elsewhere in the world. Pratson completed his Ph.D. in geological sciences at Columbia University in 1993. He has continued his investigations of seafloor topography as a research scientist, first at Columbias Lamont-Doherty Earth Observatory and then at the Institute of Arctic and Alpine Research at the University of Colorado at Boulder. Since 1998 Pratson has been associate professor of sedimentary geology at Duke Universitys Nicholas School of the Environment and Earth Sciences. Haxby earned his doctorate from Cornell University in 1978. Since then, he has conducted studies of the ocean basins as a research scientist at Lamont-Doherty Earth Observatory.

This article was originally published with the title "Panoramas of the Seafloor" in SA Special Editions 15, 2s, 50-55 (July 2005) 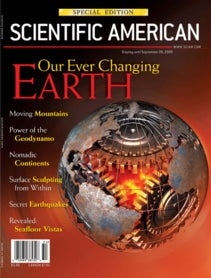 In the store
SA Special Editions
Our Ever Changing Earth
$7.95