Quantum researchers seem to have more theories than they know what to do with. Of the handful of options, take, for example, the many-worlds view, which posits that when a quantum observation is made, reality splits into parallel universes, each representing all potential outcomes. Or there is the relatively new QBism camp, members of which argue that quantum mechanics is subjective to the individuals making predictions about how they will measure an experiment. On top of these conflicting theories, any new experimental data invariably support one possible explanation and contradict another. What to make of this confounding research situation? Where some see an impasse, others see opportunity. At the very end of this issue’s cover story, Michele Reilly, co-founder of a quantum computing company based in New York City, tells our reporter that such confusion opens the door for novel experiments, of both the theoretical variety and the physical (see “This Twist on Schrödinger’s Cat Paradox Has Major Implications for Quantum Theory”). If that’s not a pure emblem of the scientific method, then I don’t know what is.

Elsewhere in this issue, Anil Ananthaswamy examines the latest estimates of alien life in the universe—estimates that ride on 18th-century statistics (see “How Many Aliens Are in the Milky Way? Astronomers Turn to Statistics for Answers”). And Alexandra Witze gives a dazzling overview of NASA’s latest rover project: Perseverance (see “NASA Has Launched the Most Ambitious Mars Rover Ever Built: Here’s What Happens Next”). If any field needed the gumption to keep going for the long haul, it’s space and physics. Enjoy!

This article was originally published with the title "The Most Confused of the Scientific Branches" in SA Space & Physics 3, 5, (October 2020)

6 hours ago — Mike Wall and SPACE.com

6 hours ago — Robert J. Orth, Jonathan Lefcheck, Karen McGlathery and The Conversation US 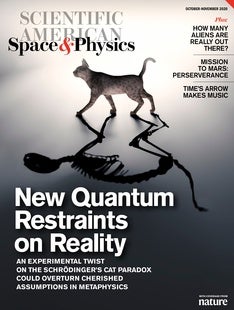