Some background: I had been wondering if one could create a numeration system in which multiplication was intuitive and easy. That’s not the case for any of the systems mentioned previously. It takes a lot of work to teach the average third-grader to multiply.

I suppose you could invent a system based on primes. Multiplication might be easy there. But then addition would be a mess. I wanted both—easy addition, easy multiplication.

And then, surprisingly, I got both. But it’s an old system. Here’s the idea. A dot represents the number 1.

A closed curve doubles whatever is inside it. 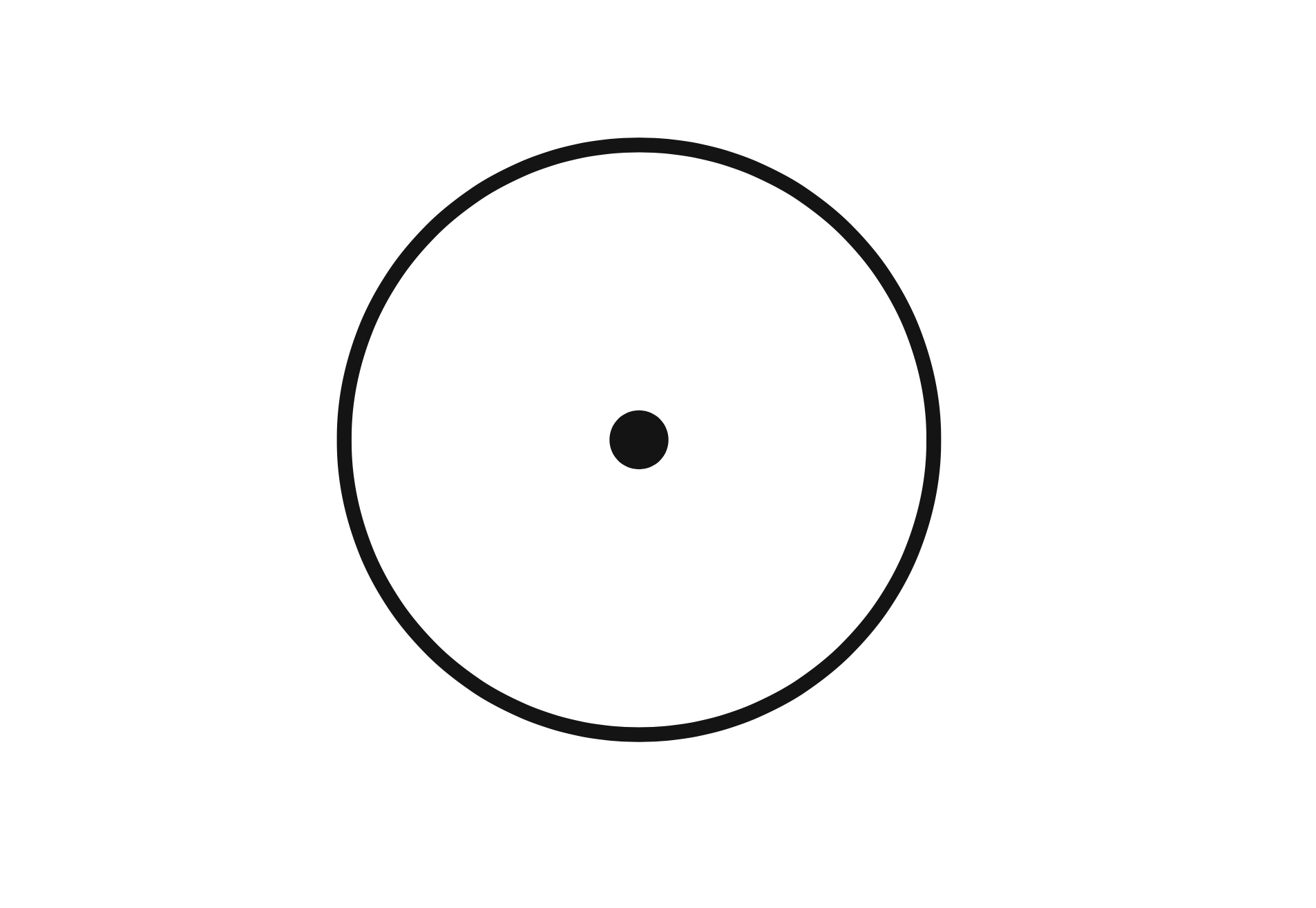 I think the reader can see the connection to binary. The binary 11011, for example, is just 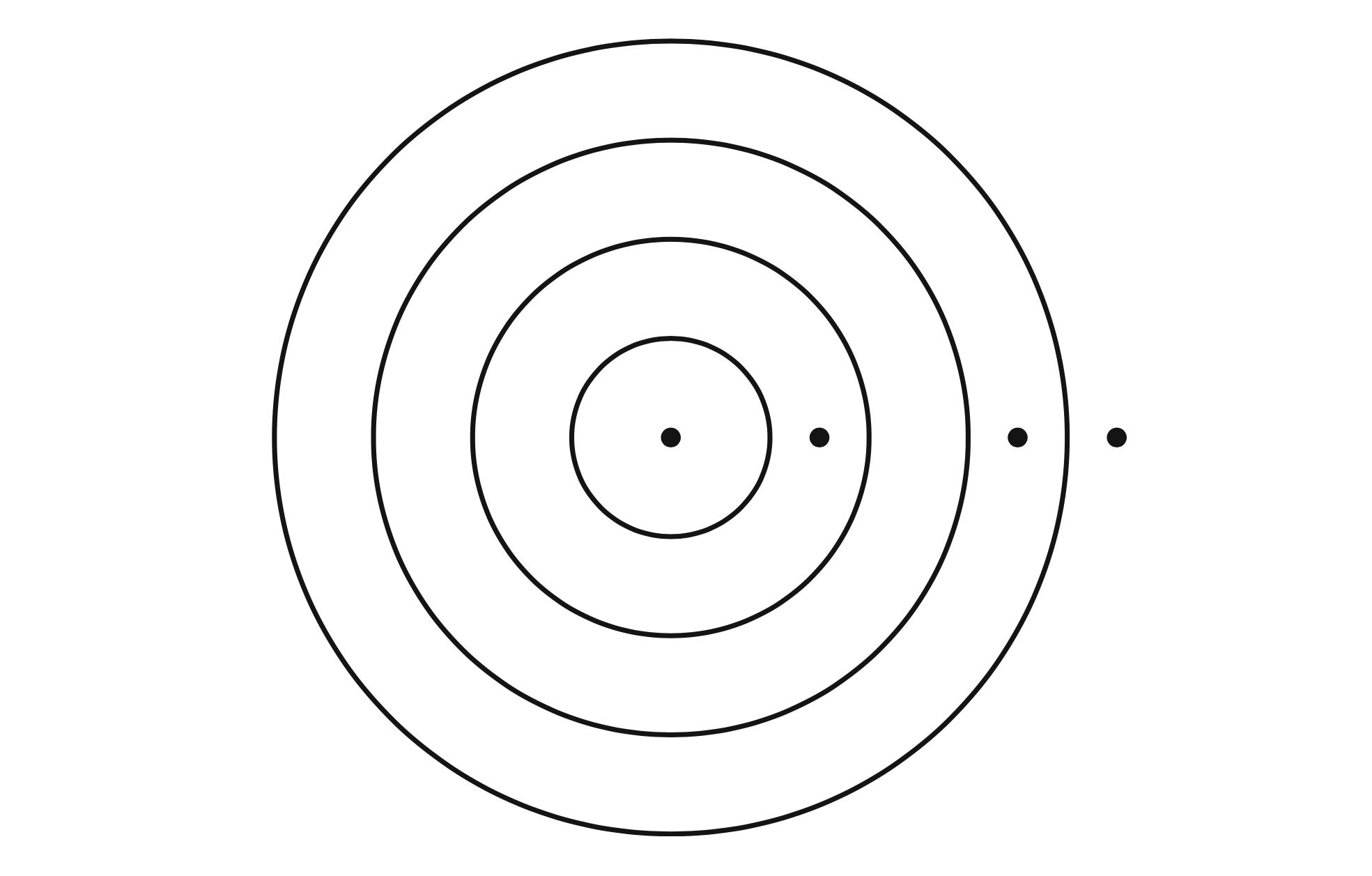 Now, multiplication. My idea was that if you want to multiply, say, 6 by 7,

then you simply replace every dot in one numeral with the other numeral. In the case above, replacing the dots in 6 with 7’s gives you: 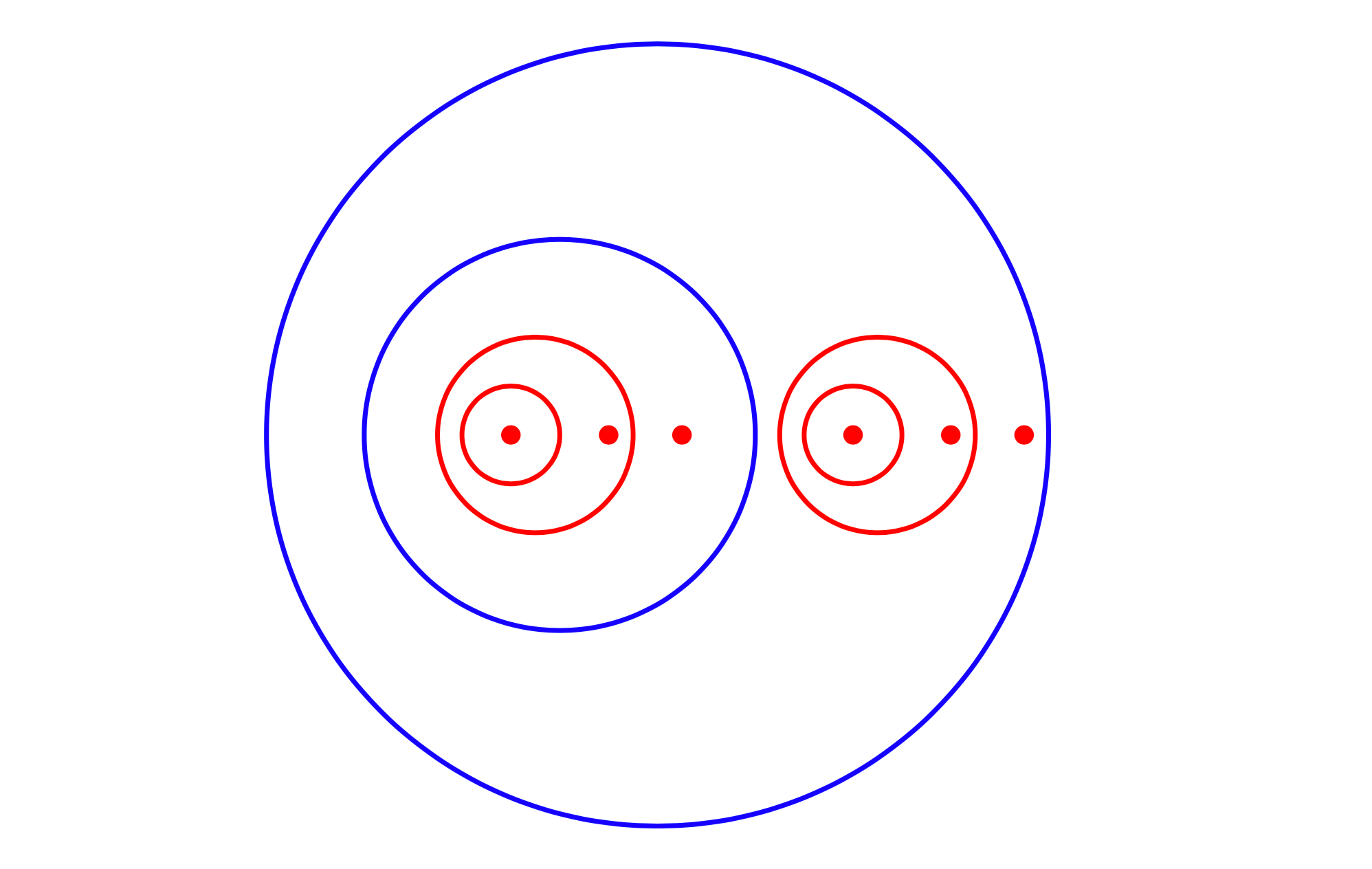 But we’re not done yet. If we allowed pictures like this, then numbers wouldn’t be represented uniquely. To ensure uniqueness, I insist that the curves are all nested. I also insist that no more than one dot appear in any region. 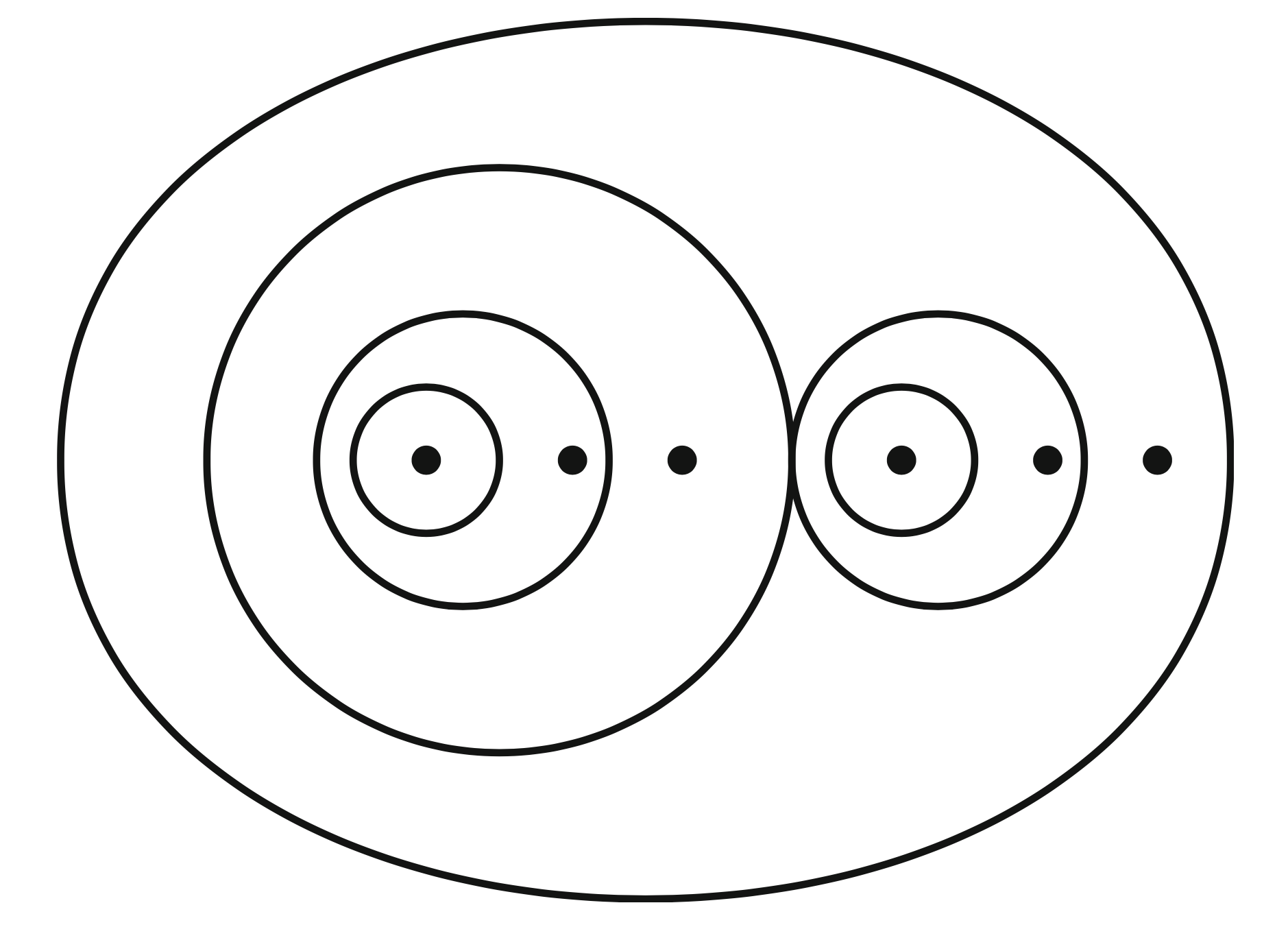 and they do something affectionate. 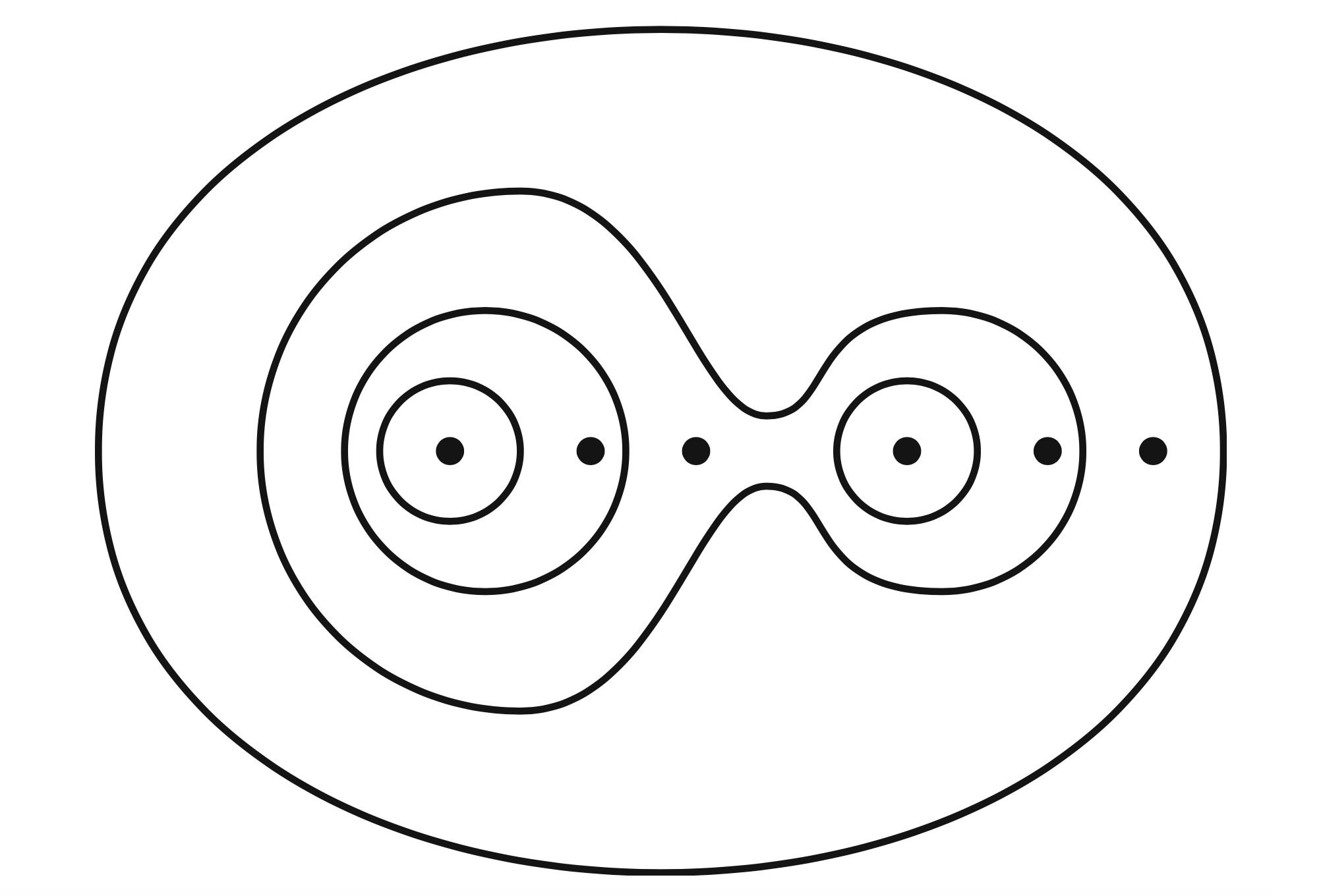 And now we have two dots in one region. So of course the dots get together. 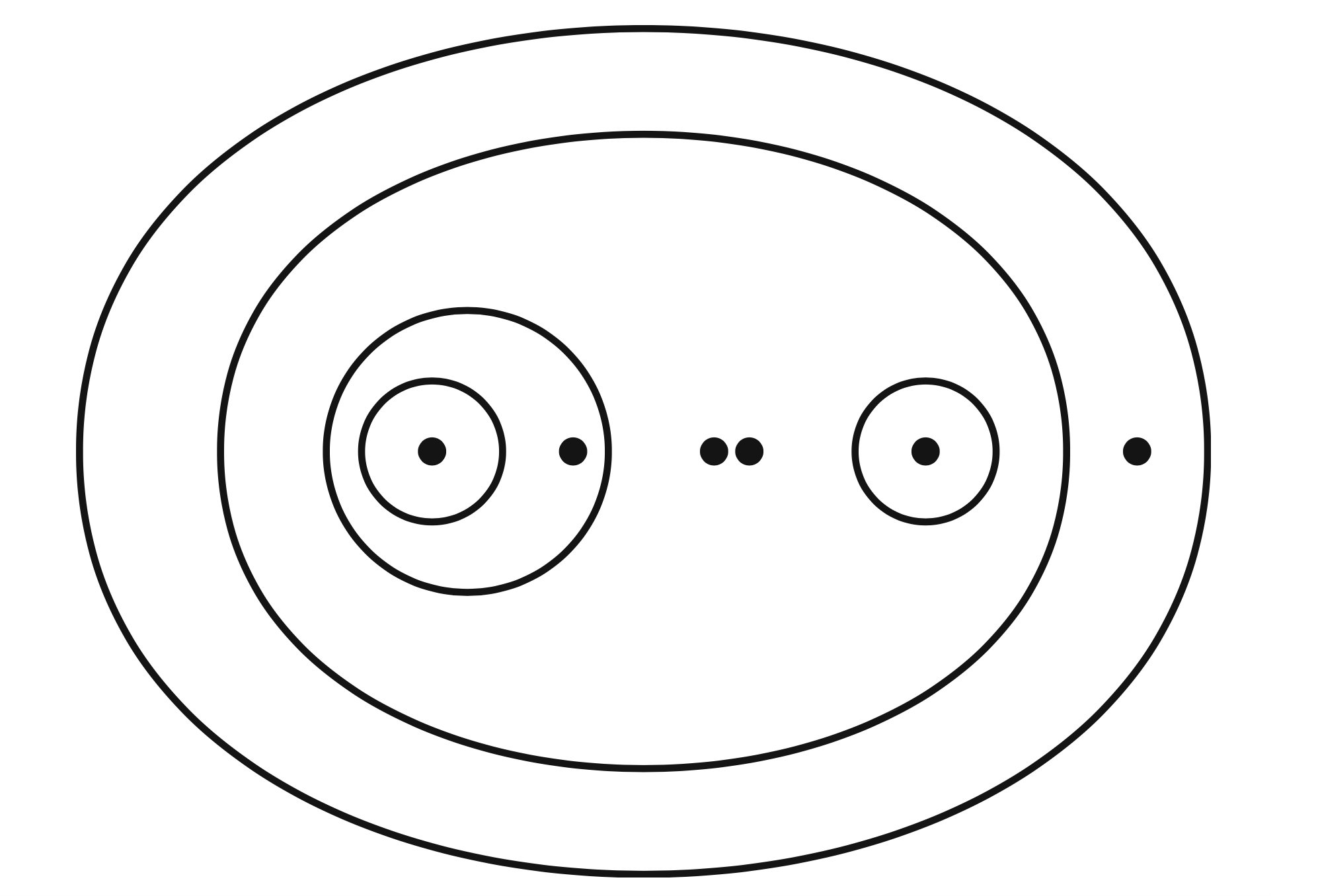 It’s love. They produce a baby and disappear. 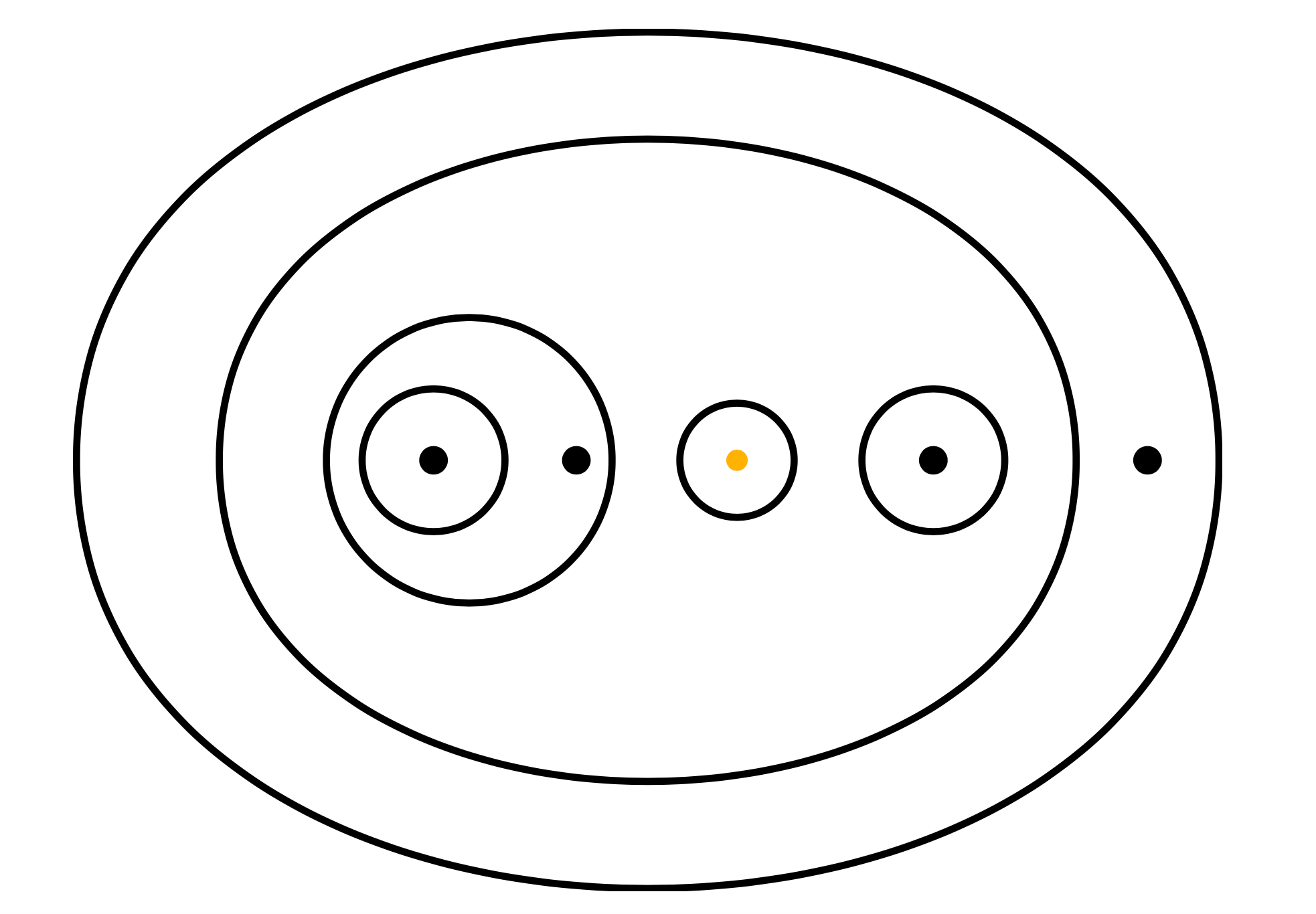 This just begs to be animated. And in fact, it can be if you go to my website.

And now there’s another romance. 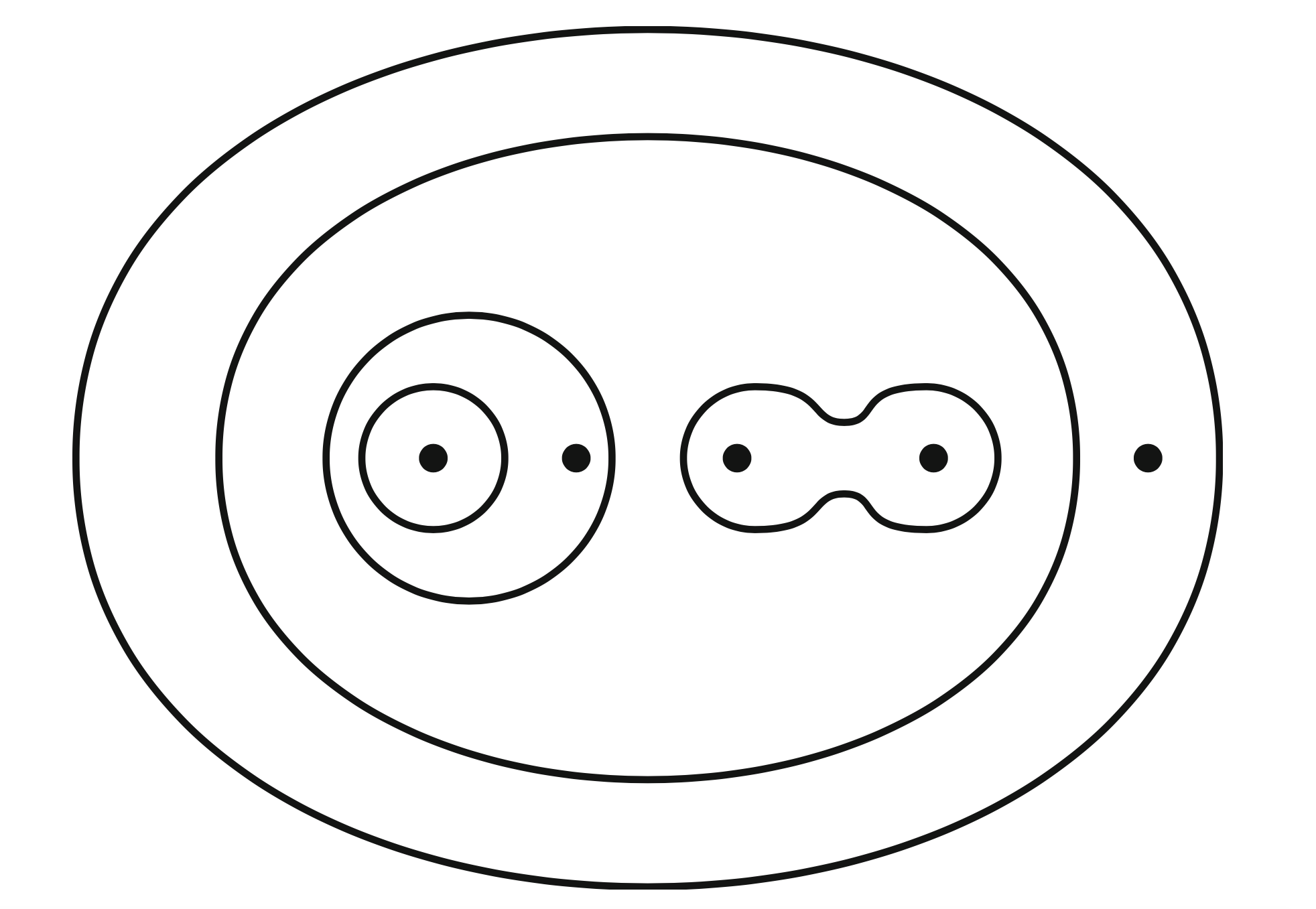 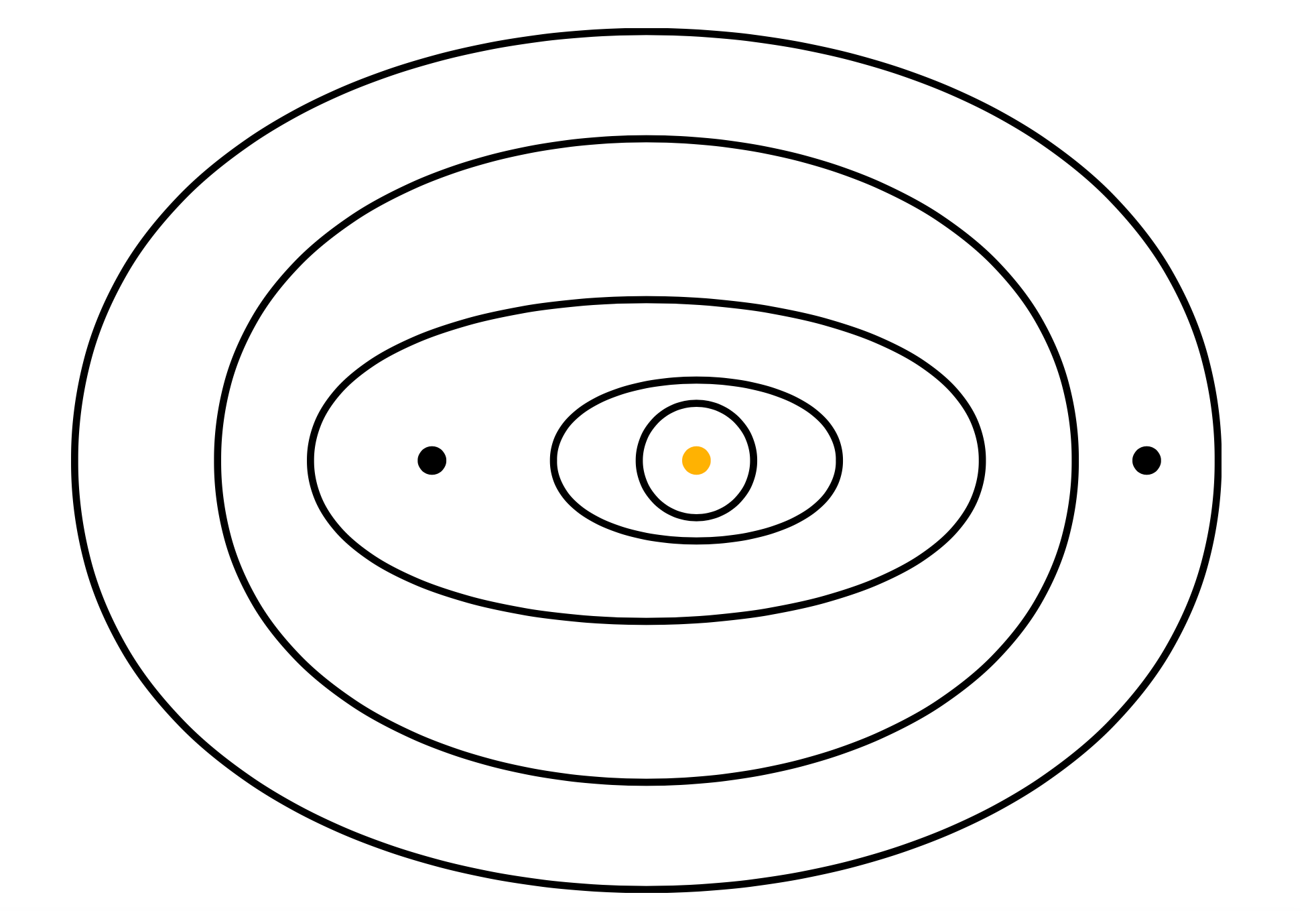 I think you can see that addition is even easier. You just put the numerals together and let nature take its course.

I have to say multiplication isn’t fast. But it is intuitive. It’s a great system!

That’s the math. On the gastronomic side, I’ve been unhappy for years with dishes labeled “bourbon chicken,” “bourbon pork chops,” and, worst of all, “bourbon salmon.” None of them tastes remotely of bourbon. But the idea of a bourbon sauce is very attractive. I wanted to create one.

I had an idea. Whiskey Sours run in my family. What about a sauce reminiscent of a Whiskey Sour?

There were false starts, but in the end I put together something I like. It’s an intense sauce. One may not want a great deal of it.

A Bourbon Sauce For Grilled Meats

Grate one of the lemons. Juice and strain both lemons.

Place the flour and butter in a saucepan and heat, stirring with a wire whisk as the butter melts and combines with the flour. Continue cooking, stirring to keep the mixture smooth. Let it bubble a bit and then add, in small amounts, 1/4 cup of the bourbon. Stir continuously to keep the sauce smooth. Add 1 tablespoon of sugar. Add half the lemon juice. Add half the grated lemon rind.

At this point, you must assume responsibility. Taste the sauce. Add more bourbon, sugar, lemon juice as you like.

You can also add water. Of course, you don’t want a seriously alcoholic sauce. But the bourbon you placed earlier underwent some cooking and lost much of its alcohol. You can add more if you like. It’s your sauce now.

And it’s a great sauce!

A Daiquiri Sauce For Fish

Grate one of the limes. Juice and strain both limes.

Place the flour and olive oil in a saucepan and heat, stirring with a wire whisk as the oil combines with the flour. Continue cooking, stirring to keep the mixture smooth. Let it bubble a bit and then add, in small amounts, 1/4 cup of the rum. Stir continuously to keep the sauce smooth. Add 1 tablespoon of sugar. Add half the lime juice. Add half the grated rind.

Again, treat this as you wish, adding more of this or that.

After I get started on something, it’s hard for me to stop. A Manhattan sauce? Maybe not.

A Brandy Alexander sauce? It might be good on chicken livers saute ed in butter.

A Bloody Mary sauce on a shrimp cocktail!

I’m not tempted to mess with champagne. I have too much respect for champagne. I do make a champagne vinegar. It took me years to get it going. It has such a delicate flavor that I sometimes dress a green salad with that and nothing else.

And then there’s gin. What about a Martini sauce?

Now approaching its fortieth birthday, The Mathematical Intelligencer is a lively quarterly written in an engaging, informal style for a broad audience. It features expository articles about mathematics (broadly defined), about mathematicians (ditto), and about the history and culture of mathematics in its intellectual, social and scientific context. Puzzles, poetry and fiction appear in its pages too.

Recent Articles by The Mathematical Intelligencer