The reigning queen of Belfast, Northern Ireland, is the “Baroness” Titti Von Tramp, a deeply bronzed, thoroughly waxed and statuesque figure approaching seven feet tall in stiletto heels, wearing tinted couture glasses and crowned with a perfect platinum mane. On any given night, you can find the bosomy Von Tramp at one of the local nightclubs, pursing her strawberry-colored lips in a photo-op for one of her many fans or perhaps making an Ulster businessman turn bright red by deviously running one long, manly finger down the man's cheek and judging, “That's a good year.”

For many people, the term “transvestite” is synonymous with such larger-than-life characters, an entertaining coterie of mostly gay men and their oversexed female alter egos. But as with any human demographic, transvestites are a very diverse bunch, and it is only a select few who can turn their minority status into such a lucrative career in drag theatrics. For more modest individuals, the limelight is hardly a desirable place to be. Furthermore, the psychological motivation to dress or act as the opposite sex varies widely—transvestism is but one of the many manifestations of cross-gender behavior in the human species.

As researchers probe the biological, psychological and cultural underpinnings of transsexuality in its myriad forms, they continue to be astounded by the individual variation they find. And many scientists believe that this incredible diversity offers an important opportunity to unravel the subtle threads tying together biological sex, gender and sexual orientation. In fact, it is only because these traits occasionally fail to match up along predictable lines in a single individual that scientists fully realize how very distinct these variables are from one another.

Gender vs. Sex
Biological sex is perhaps the most straightforward of the three variables at the heart of the science of transsexuality. We all have a set of sex chromosomes that identifies each of us either as a genetic male (XY) or as a genetic female (XX). Of course, as we learned from the case of Olympic runner Caster Semenya, a woman rumored to have a genetic abnormality that gave her body malelike strength, chromosomal sex is not always so obvious. There are many genetic disorders in which sex chromosomes are either missing or redundant (for example, XYY), and birth defects can occur in which infants are born with ambiguous genitalia. But in general, researchers who study gender identity disorder—the clinical term for what we colloquially know as transsexuality—exclude individuals with underlying chromosomal or somatic abnormalities such as the one rumored to affect Semenya. Transsexuals are people with normal chromosomes—biological males or females—who feel, psychologically, like the opposite sex.

The third variable related to sex and gender is sexual orientation. Most biological males are attracted to biological females, and vice versa. Yet the very fact that homosexuals (and bisexuals) exist—and, more important, are represented by such a wide, stereotype-shattering spectrum of individuals that includes both “lipstick lesbians” and very masculine gay men—shows clearly that sexual orientation, too, is separable from both biological sex and gender identity. It is worth pointing out that homosexuality itself is not a transsexual behavior—gay men, in general, do not want to become women—but transsexual people can be either straight or gay.

In teasing apart these three related but distinct constructs of biology, gender and sexual orientation, scientists are starting to better understand the phenomenon of transsexuality, a term defined by the American Psychological Association as “a strong and persistent cross-gender identification and a persistent discomfort with [one's] biological sex.” Their findings are revealing that even within the transsexual community there is much diversity. For example, a biological male who experiences gender dysphoria, and thus “feels” like a female, can be either gay or straight when it comes to his sexual orientation. And beyond the mixing and matching that occurs between sex, gender and sexual orientation, a huge array of psychological and cultural factors seems to underlie or affect transsexuality. Scientists are only starting to unravel these seemingly innumerate influences.

Mind over Gender
Although mental states can differ widely among transsexuals, most report experiencing gender dysphoria—the unhappy mismatch between biological sex and gender identity. A good example of gender dysphoria is the case of Chaz, formerly Chastity, Bono (right), daughter-cum-son of entertainers Sonny and Cher. After living most of her adult life as a lesbian, Bono announced in mid-2008 that he was in fact a transsexual and had begun to transition from the lesbian “Chastity” to the straight male identity of “Chaz.” (Chaz is just as attracted to his girlfriend, Jennifer, as Chastity was before the transition, only given Bono's physical metamorphosis, theirs is arguably no longer a same-sex relationship.) As a female-to-male (FtM) transsexual, Chaz has already had his breasts removed and has embarked on a regimen of testosterone treatment, which has caused his voice to drop by a full octave as well as stimulated a noticeable five o'clock shadow.

“Gender is between your ears and not between your legs,” Bono said during a 2009 interview with ABC's Good Morning America. “As a child, it was really clear. I felt like a boy ... As you get older, it gets more confusing, because suddenly there's more pressure to fit into your assigned gender identity. [And so] a lot of FtMs end up doing a stint in the lesbian community because it just kind of makes sense.”

Nearly all FtM transsexuals have a similar story—they are overwhelmingly homosexual (attracted to women). Male-to-female (MtF) transsexuals, on the other hand, are a much more diverse group, in terms of both their sexual orientation and the psychological underpinnings of their transsexuality.

In the late 1980s University of Toronto psychiatrist Ray Blanchard introduced the theory of “autogynephilia,” in which he argued that heterosexual MtF transsexuals (that is, biological males who are attracted to women but who wish to transition to a female identity) are in fact sexually aroused by the thought of themselves as females. As an example of autogynephilia, consider the following account by male-to-female transsexual Nancy Hunt in her memoir Mirror Image (Holt, Rinehart and Winston, 1978). “I was feverishly interested in [girls],” Hunt writes. “I studied their hair, their clothes, their figures. And I brooded about the increasing differences between us. I seethed with envy while at the same time becoming sexually aroused—I wanted to possess them even as I wanted to become them. In my night-time fantasies, as I masturbated or floated towards sleep, I combined the two compulsions, dreaming of sex but with myself as the girl.”

Lawrence bases her theory on the similarities she has noticed among the heterosexual MtF transsexuals in her Seattle clinic. Most are quite masculine in appearance and have led successful lives as men, usually in male-dominated professions such as engineering, business or computer science; often they are married and have several children. Curiously, many have autisticlike traits: they seem more interested in “things” than in other people and have a background of poor social relationships. And almost invariably, Lawrence points out, they have a history of sexual arousal by cross-dressing.

In a 2007 article in Perspectives in Biology and Medicine, Lawrence writes that the heterosexual MtF transsexuals she has seen “typically want to undergo sex reassignment surgery as quickly as possible and want their new genitals to resemble as closely as possible the female genitals they love and idealize. After surgery, these transsexuals are not only relieved to be rid of their male genitals but are delighted with their female-appearing genitals and are often eager to display them to other people (e.g., at transgender support group meetings).”

In contrast, homosexual MtF transsexuals—those attracted to men—do not idealize female genitalia and “often seem indifferent or ambivalent about undergoing sex reassignment surgery,” Lawrence writes. Indeed, most researchers agree that there are meaningful differences between gay and straight MtF transsexuals—including, intriguingly, the cultures in which they exist.

Emerging Cultures
Cultural influences are perhaps the least understood aspect of transsexuality—in large part because the effects of culture are so hard to define and study. Still, the evidence suggests that these factors strongly influence whether MtF transsexuals tend to be gay or straight. In Far Eastern countries such as Korea, Malaysia, Singapore and Thailand, fewer than 5 percent of MtF transsexuals may be heterosexual. The rest are homosexual biological males, usually extremely feminine in their behavior and appearance and exclusively attracted to men. (These are the so-called kathoeys or ladyboys of Southeast Asia.) In striking contrast, this ratio of gay to straight is almost perfectly flipped in the West, where 75 percent or more of American and British MtF transsexuals are heterosexual—attracted to women—or bisexual.

Lawrence published a study online in December 2008 in the Archives of Sexual Behavior that may help explain this trend. She reports that the more a society is collectivist—that is, the more it values social norms over individual expression—the greater the percentage of homosexual MtF transsexuals. This correlation, she says, could result from the fact that in collectivist countries, such as those in Southeast Asia, effeminate, homosexual men are not well tolerated—they may fare better as women in accepted transgender roles such as ladyboys. Men who are too masculine to pass as women, on the other hand, would be shunned if they tried to do so. Countries such as the U.S. and the U.K., on the other hand, place more value on individual expression and personal choice and are therefore more tolerant of both effeminate men and masculine MtF transsexuals.

Clearly, there are radical differences underlying the expression of transsexuality—differences involving the elusive causal algorithms of individual experience, personality, biology and culture. Scientists working in this area have made considerable progress, but much remains a mystery. Fortunately, the past decade or so has seen transsexuals increasingly “coming out of the closet” as a sexual minority. There was an especially sharp increase in clinic-referred adolescents with gender identity disorder starting in 2004, which is still rising. This dramatic spike may be the result of the destigmatizing influence of media exposure. Movies such as Boys Don't Cry (1999) and Transamerica (2005) offer sympathetic portrayals of transsexuals, and the subject of childhood gender identity disorder has been featured in the New York Times, on ABC's 20/20 and on the Oprah Winfrey Show.

As transsexuals continue to become more open about their experiences, scientists are realizing that cross-gender behavior is not only a fascinating expression of human variation but also a richly informative area for studying the subtlest vagaries of sexuality. Like no other aspect of our nature, transsexuality is where biology, gender and sexual orientation meet—and, as we have seen, often part ways.

Becoming What We Love: Autogynephilic Transsexualism Conceptualized as an Expression of Romantic Love. Anne Lawrence in Perspectives in Biology and Medicine, Vol. 50, No. 4, pages 506–520; Autumn 2007.

Jesse Bering is a frequent contributor to Scientific American. His writing has appeared in Slate, New York, New Republic and more. The author of Why Is the Penis Shaped Like That? (forthcoming from Scientific American/Farrar, Straus and Giroux), he holds a Ph.D. in developmental psychology and is the former director of the Institute of Cognition and Culture at Queen's University, Belfast. (www.jessebering.com) 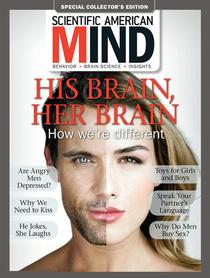