It must be difficult for the roughly half a billion people who visit Wikipedia every month to remember a world without the free online encyclopedia. Since co-founders Jimmy Wales and Larry Sanger launched Wikipedia on January 15, 2001, the site has grown into a behemoth of information with about 35 million articles and 30 million images available in nearly 300 different languages. The English-language Wikipedia site alone features more than five million articles.

There have been plenty of bumps along Wikipedia’s 15-year journey—the site has coped with a feud between the co-founders, criticism over the accuracy of its content and an exodus of volunteer editors, the last of these problems having only recently stabilized. These growing pains, however, have not stopped Wikipedia from turning up near the top of most search engine results nor has the site had to give up its nonprofit status or post advertising to draw revenue.

Wikipedia’s editing corps is one of its greatest strengths. Of the more than 100,000 volunteers registered as editors for the site’s English-language version, more than 80,000 make at least five edits per month. The site also benefits from more than 4,000 administrators, or experienced editors elected by their peers and given special privileges including the ability to block user accounts and IP addresses as well as delete (or undelete) pages.

Another key to Wikipedia’s success is the nonprofit Wikimedia Foundation, the umbrella under which, among other educational resources, Wikipedia falls, and which has hosted and funded the encyclopedic site since June 2003. The foundation also raises money, distributes grants and develops software for Wikipedia sites. Scientific American spoke with Executive Director Lila Tretikov about the challenges of growth, the shift to mobile devices and how to stop the hemorrhaging of volunteers.

[An edited transcript of the conversation follows.]

What are your top priorities for the site?

Open knowledge is a trend around the world. Even though 28 percent of the world’s population has grown up with Wikipedia as a free online resource for information, there are billions of people are coming online worldwide for the first time. One area we need to address is the growing use of mobile devices, which represent 50 percent of our traffic now. We also have to be sensitive to the differences among all of the people using the site. That means investing a lot in the translation of content into more languages, especially those that are large and underrepresented on Wikipedia. Some examples would be Arabic, Indonesian and Hindu. Another priority is to bring different kinds of content to the site’s articles, including video and audio.

What are the foundation’s specific plans to make Wikipedia easier to use and more relevant for mobile users?

The foundation launched Wikipedia apps for both Android and iPhone last year. The apps are different from the site because they offer more than just passive engagement. They are much more interactive, to the point where the apps can access your location information from your phone and point out all of the historical places around you.

Wikipedia struggled over the years to retain experienced editors to monitor and update the site’s content. What are you doing to address this?

It’s something that we do in partnership with our community. It’s not something we can do alone. And actually [2015] was the first time since 2007 that our editor numbers remained stable. We're not claiming any victory here yet but it’s been very exciting and very encouraging. There’s a lot that the community has done on their side to help with this, holding edit-a-thons and other competitions to encourage one another. On the foundation side, we do a lot of work to make the editing process easier and to provide more encourage to our editors. This year we have made a visual editing tool the default for each new editor on Wikipedia. In the past the format for editing required some knowledge of basic annotation, which we called wikitext. Today you do not have to do that anymore, it’s like editing in a word processor.

Another thing we have done is really attack performance on the site—increasing it by nearly 600 percent—which is especially important if you’re outside the United States. The farther you are from North America, the more important it becomes. Oftentimes an edit tends to fail if the load time is too slow. We’ve also created personalization algorithms for editors that help identify what areas editors are interested in as well as the languages in which they’re proficient. The software tool can recommend content for them to translate into those languages. The tool will also provide a basic translation of a page so the editor won’t have to start from scratch. Our research shows that [this type of assistance] nearly doubled the number of articles that an individual will create.

What are the foundation and its affiliates doing to get more subject-matter experts to contribute to the site?

We already have a large number of subject-matter experts on the site. If you look at our medical component alone, a huge part of that [content] comes from doctors and professionals. That said, we facilitate programs that engage with higher-education institutions. We do some of that work from the foundation but more often it’s done by our sister institutions. For example, [the Wiki Education Foundation] that is focused on the Year of Science [program] this year, and their core mission is to work with universities and university professors to implement Wikipedia programs in their classrooms. Professors work with their students to update scientific content as part of their classroom curriculum. We also have a program called the GLAM–Wiki initiative, in which galleries, libraries, archives and museums—such as the Smithsonian—have Wikipedians in residence contributing content from those sites.

Wikipedia’s core of editors has been primarily male throughout the site’s history. How is the foundation working to attract more female volunteers, and why is gender balance important to Wikipedia’s success?

It’s really important. Think of it as a derivative indicator. If you don’t have a diverse enough group of editors, if you have a ratio that does not represent the world overall, the content will oftentimes be affected. It may not be a direct, linear relationship but it definitely has an effect. The reason why it’s really important to us to make sure there are a lot of women editing is we want content that is about women and is important to women. It’s all related. We are focused on doing what we can to encourage our community to support women on Wikipedia. We also have an INSPIRE Grant Program where we gave grants to women editors to grow content.

Are you aiming to have a specific ratio of male to female editors for the site?

We did research on this in 2013 and a study by researchers Benjamin Mako Hill and Aaron Shaw estimated that 23 percent of U.S. editors are women and 16 percent of global editors are women. We also try to target special programs on women, for example an education program in Arabic that is 80 percent women. Wikipedia is so diverse, which is why it’s hard to put just one number on it.

The Internet Has Become the External Hard Drive for Our Memories

When The Last of Us are Left, How Long Would it Take to Transcribe Wikipedia? 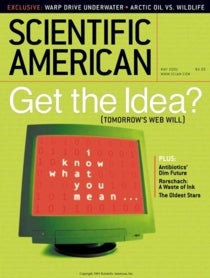