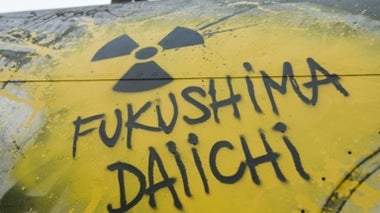 Crippled Fukushima Reactors Are Still a Danger, 5 Years after the Accident

Japan’s citizens, and scientists worldwide, do not have answers to basic health and environment questions

Is Radioactive Hydrogen in Drinking Water a Cancer Threat?

The EPA plans to reevaluate standards for tritium in water

Having led Japan through the 2011 nuclear crisis, the elder statesman is now campaigning for a world without nuclear power

Government Urged to 'Step In' to Halt Fukushima Plant Leaks

Radioactive cesium from Japan's Fukushima nuclear disaster shows up in bluefin tuna off the California coast, offering researchers a way to follow the fish's migratory history

Hotspots of radiation from the nuclear disaster are still likely to cause localized, small increases in cancer risk, according to a new report by the World Health Organization

How Safe Are U.S. Nuclear Reactors? Lessons from Fukushima

The U.S. has reactors of the same designs that melted down at Fukushima Daiichi, but regulators hope changes could prevent a repeat of Japan's nuclear crisis

Heart disease and depression are likely to claim more lives than radiation after the earthquake, tsunami and nuclear accident, experts say

The Fukushima evacuation zone raises the issue of what would happen during an evacuation in heavily populated U.S. metropolises during a nuclear meltdown

From Nuclear Plant to Nuclear Park?

What the future holds for Japan's Fukushima Daiichi plant

We know surprisingly little about what low-dose radiation does to organisms and ecosystems. Four years after the disaster in Fukushima, scientists are beginning to get some answers

On March 11, a powerful, magnitude 9.0 quake hit northeastern Japan, triggering a tsunami with 10-meter-high waves that reached the U.S. west coast. Here's the science behind the disaster...

Japan still struggles with the effects of a powerful earthquake, devastating tsunami and multiple meltdowns at the Fukushima Daiichi nuclear power plant

Life after a Nuclear Catastrophe: An Inside Look [Slide Show]

Why do people choose to stay near places like Chernobyl and Fukushima?

Fukushima Will Be a Wasteland

The surprising accident at Fukushima puts the spotlight on a new generation of U.S. nuclear reactors. Are they safe enough?

Ten Years of the Chornobyl Era