Human Population Reaches 7 Billion--How Did This Happen and Can It Go On?

A mere 12 years after surmounting six billion, the world's population will reach seven billion, according to the U.N. But that rate seems to be slowing

"Proofiness" Inherent in Population Milestones Such as "7 Billionth Person"

There's no way that anyone could pinpoint which baby became the seven billionth person living on Earth. The uncertainties in measurement are simply too huge 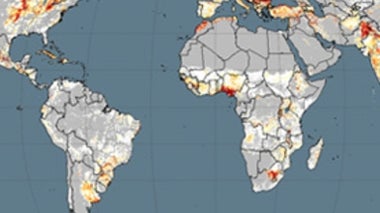 Five steps, reflected in the maps below, could be taken to help feed the large population predicted for 2050 as well as reduce the sizeable harm agriculture imposes

How Many People Can Earth Hold? Well...

The Rockefeller University's Joel Cohen noted at the annual meeting of the American Association for the Advancement of Science that the question of Earth's human-carrying capacity depends on how we're being carried...

Two typical German shepherds kept as pets in Europe or the U.S. consume more in a year than the average person living in Bangladesh, according to research by sustainability experts Brenda and Robert Vale of Victoria University in Wellington, New Zealand...

Grappling with the Anthropocene: Scientists Identify Safe Limits for Human Impacts on Planet

Will 10 Billion People Use Up the Planet's Resources?

Human activity is responsible for a sixth extinction of thousands of species, so Paul Ehrlich and a colleague call for educating women to slow population growth

7 Billion and Still Growing: Explosive Population Growth Might Have Helped Us Displace Neandertals

The human population will top seven billion this year—more than double what it was just 50 years ago, experts say.

And these next 39 years are expected to bring about some big shifts among the biggest countries...

The nine billion people expected by 2050 will stress the planet, but cost-effective means can prevent overpopulation

An additional 150 people join the ranks of humanity every minute, a pace that could lead our numbers to reach nine billion by 2050. Changing that peak population number alone could save at least 1.4 billion metric tons of carbon from entering the atmosphere each year by 2050, according to a new analysis—the equivalent of cutting more than 10 percent of fossil fuel burning per year...

Is birth control the answer to environmental ills?

As we swell toward nine billion in the next half a century, humanity will undergo historic changes in the balance between young and old, rich and poor, urban and rural. Our choices now and in the years ahead will determine how well we cope with our coming of age...

Booming population growth among the living, according to one rumor, outpaces the dead

The Reproductive Revolution: How Women Are Changing the Planet's Future

The population bomb is being defused. It is being done without draconian measures by big government, without crackdowns on our liberties--by women making their own choices

Population and Sustainability: Can We Avoid Limiting the Number of People?

Can We Feed the World and Sustain the Planet?

If the world is going to hell, why are humans doing so well?