Offshore Wind May Power the Future 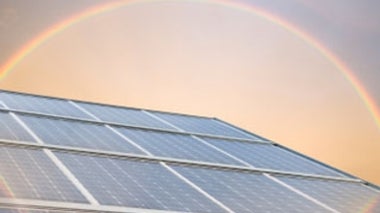 How does solar power work?

Chemist Paul Alivisatos explains how to generate electricity from sunlight

Is the Hydrogen Car of the Future Running on Empty?

Scientific American editor Steven Ashley test drives a car that may be the future of automotive transportation--if cost, technology and infrastructure problems can be resolved

Turning the Tide on Harnessing the Ocean's Abundant Energy

For National Security, Get Off Oil

Where Do the Presidential Candidates Stand on Environment and Energy?

From drilling for oil to climate change, the answers may surprise you

Cheap, durable, efficient devices are needed to generate a significant amount of electricity from the sun. So-called thin-film photovoltaic cells may be just the ticket

A Power Grid for the Hydrogen Economy

Cryogenic, superconducting conduits could be connected into a "SuperGrid" that would simultaneously deliver electrical power and hydrogen fuel

Inside the Solar-Hydrogen House: No More Power Bills--Ever

China is now the world's workshop for wind and solar power. But can they reach their own ambitious goals for renewable energy?

More than 2,000 times the entire annual energy consumption of the U.S. is available deep underground

New Jersey-based NRG Energy applies to build the first new nuclear power plant in the U.S. in more than 30 years

Back to the Future: Harnessing the Power of the Yangtze River [Slide Show]

On a Wing and Low Air: The Surprising Way Wind Turbines Kill Bats

If controlling global warming is a priority, then industries—from banking to cement manufacturing—will have to become efficient energy users, which will require a transformation of their basic operations...

Cylindrical Solar Cells Give a Whole New Meaning to Sunroof

Iceland goes green by tapping the power of the planet

How to build a solar refrigerator: The brighter the sun, the better it works

Is the Sun Setting on Solar Power in Spain?

With waning subsidies and other attractive markets, can Spain maintain its lead in solar tech?