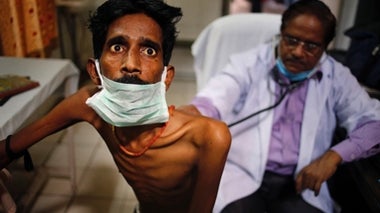 Supercharged Tuberculosis, Made in India

A patient with extensively drug-resistant TB flew from Mumbai to Chicago, and the deadly disease could become an infamous export due to problems in India's public health system

How to Solve the Problem of Antibiotic Resistance

Penicillin and its relatives have been in wide use since the 1940s, but researchers have only now discovered another way that it thwarts bacteria. Karen Hopkin reports

The viruses that spread antibiotic resistance

Bacteriophages are viruses that infect bacteria, and in the great war between humans and pathogenic bacteria they can act as allies for both sides.

Resistance from the Rear – Hospital Effluent and the Growing Antibiotic Crisis

If you ever worry that you’re a bit too optimistic about the future, try reading Maryn McKenna’s posts about the growing threat of antibiotic resistance.

End of the Antibiotic Age: You’ve Been Warned

Widespread antibiotic resistance is no longer a potential problem but has become a major threat, according to the World Health Organization.

Can We Stop the End of Effective Antibiotics?

To check the advance of antibiotic resistance, we’ve got to get smarter about dispensing drugs

Although the total number of TB cases is falling worldwide, more dangerous strains appear to be proliferating

The Enemy within: A New Pattern of Antibiotic Resistance

Return of the Clap

Gonorrhea, once a minor illness, is developing resistance to the last category of drugs that still works against it and could become untreatable

How to tell the bad news from the really bad news