Evolving Creationism in the Classroom

Creationists cast themselves as proponents of "academic freedom" 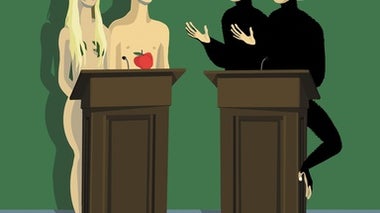 Opponents of evolution want to make a place for creationism by tearing down real science, but their arguments don't hold up

Should Science Speak to Faith?

John Rennie, Michael Shermer and Steve Mirsky all watched Ben Stein's new antievolution movie. Here's what they had to say about its design flaws.

Saddle Up That Stegosaurus--A Visit to the Creation Museum

In this episode Columbia College Chicago's Stephen Asma discusses the new antievolution Creation Museum in Petersburg, Ky., as well as his books on natural history museums and monsters, both mythological and teratological...

Institutions step up fight against attacks on theory of evolution

A consortium of scientific societies wants the scientific community to get more involved in science education, including evolution--before it's too late. Steve Mirsky reports.

Is the universe fine-tuned for life?

The Woodstock of Evolution

The World Summit on Evolution, held in the Galapagos Islands, revealed a science rich in history and tradition, data and theory, as well as controversy and debate

Darwin at the Zoo

Did humans invent right and wrong, or are these feelings part of the inheritance from our primate ancestors?

Can a Robot, an Insect or God Be Aware?

Putting Darwin in His Place

Using his quiet country estate as headquarters, the great naturalist was a reclusive revolutionary

Okay, We Give Up

We feel so ashamed

A new movie, Expelled, claims that intelligent design is good science that is being censored by adherents to evolution, which is nothing but Darwinian dogma. Scientific American's editor-in-chief, John Rennie, and podcast host Steve Mirsky discuss the movie...

An open letter to Messrs. Dawkins, Dennett, Harris and Hitchens

Darwin on the Right

Why Christians and conservatives should accept evolution

The Gradual Illumination of the Mind

The advance of science, not the demotion of religion, will best counter the influence of creationism