Darwin Speaks: "How faithlessness stalked me"

An "interview" with Charles Darwin in which he describes how he became a student of nature, his initiation into the theory of evolution, and his religious scruples. It seemed he knew the trouble he was getting into... 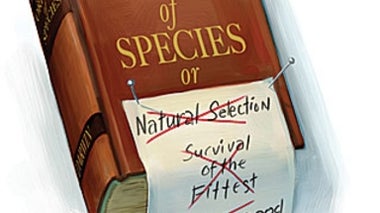 A Skeptic's Take on the Public Misunderstanding of Darwin

Darwin on a Godless Creation: "It's like confessing to a murder"

200 years after the birth of Charles Darwin, his theory of evolution still clashes with the creationist beliefs of some organized religions. For him personally, it meant the end of his belief in creation by God...

When the scientific establishment put a spiritualist on trial, the co-discoverers of natural selection took opposing sides

Portrait of Darwin as a young (flatulent) scientist: Natural selection serves as the theme of an incoherent reality show

The greatest scientists often become the centerpiece of theater or musical works that expropriate their images and ideas as emblems of a particular historical era.

Six Things in Expelled That Ben Stein Doesn't Want You to Know...

...about intelligent design and evolution

A spokesman for the Anglican Church says it should admit it wronged Charles Darwin, whose theory of evolution is still considered anti-Christian in some circles, even as it's become a cornerstone of science...

Fossil remains show that some plant species believed to have invaded the Galapagos islands about 500 years ago are in fact natives. Ecologists can examine fossil remains to determine what really belongs in a given habitat...

Individual versus Group in Natural Selection

The naturalist would approve of how evolutionary science continues to improve

Darwin historian Richard Milner shares some of the lesser known aspects of Darwin's life. And Scientific American columnist Michael Shermer talks about the stock market, religion and other belief systems...

Putting Evolution to Use in the Everyday World

Understanding of evolution is fostering powerful technologies for health care, law enforcement, ecology, and all manner of optimization and design problems

The Human Pedigree: A Timeline of Hominid Evolution

Some 180 years after unearthing the first human fossil, paleontologists have amassed a formidable record of our forebears

A Victorian amateur undertook a lifetime pursuit of slow, meticulous observation and thought about the natural world, producing a theory 150 years ago that still drives the contemporary scientific agenda...

An Australian city named for Darwin is already celebrating his birthday

50 Years Ago: A Witness at the Scopes Trial

In 1925 a Tennessee teacher of biology named Thomas Scopes was tried for teaching the theory of evolution. An expert witness at the trial relates how evolution lost in court but won in the eyes of the nation...