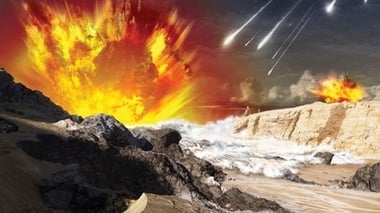 Earth's Water May Have Come from Comets, Asteroids or Something Else Entirely

To discover the origin of the oceans, scientists are investigating our solar system’s farthest reaches and earliest moments

Shortly after 7:30 am Eastern time this morning, a seven-year space voyage at last reached its final destination: NASA's Dawn mission entered orbit around Ceres, a small, icy world orbiting the sun between Mars and Jupiter...

NASA’s Dawn mission, having performed remarkably at the asteroid Vesta, is homing in on Ceres. The spacecraft’s ion engines will bring it to a capture orbit around this 590 mile diameter dwarf planet on March 6th, 2015 – at a distance some 2.5 times further from the Sun than the Earth...

On September 5th NASA's Dawn spacecraft left the asteroid Vesta and set sail for the dwarf planet Ceres, where it will arrive in 2015. John Matson reports