Are Modern Cities for People or Cars?

The cities of the future might be greener, cleaner and more vibrant if people are put before automobiles. David Biello reports 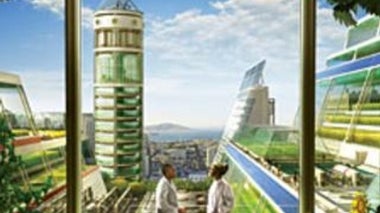 The Green Apple: How Can Cities Adapt to Climate Change?

A Plan to Power 100 Percent of the Planet with Renewables

Wind, water and solar technologies can provide 100 percent of the world's energy, eliminating all fossil fuels. Here's how

The next wave of high-speed rail lines should do away with the rails altogether, say proponents of magnetic levitation technology

The Future of Cars

What Is the Smart Grid?

Updating the aging electricity grid may save money, energy and greenhouse gas emissions

People take cars for walkable trips in part because such trips are boring and unattractive. Better design of the urban environment could create more pedestrians. Karen Hopkin reports

Sprawling into the Third Millennium

Suburbia was a dream inspired by revulsion to city life. Now many suburbs are just as crowded, and sprawl moves on.

Urban travel is slow and inefficient, in part because drivers act in self-interested ways

How home solar arrays can help to stabilize the grid, Part 1 of 2

How home solar arrays can help to stabilize the grid, Part 2 of 2

Home sweet home: Not all honeybees work far afield--some are making honey high in the rooftops

Visions of the future have long revolved around the automobile, from the ubiquitous flying car of sci-fi flicks such as The Fifth Element to the garbage-guzzling, Mr.

The Green Space Cure: The Psychological Value of Biodiversity

How to Get More Bicyclists on the Road

To boost urban bicycling, figure out what women want

The Web-only article below is a special rich-media presentation of the feature, "A Path to Sustainable Energy by 2030", which appears in the November 2009 issue of Scientific American ...

Automobiles are still part of the American way of life, but in many municipalities other modes of transportation are moving in on what had been car territory