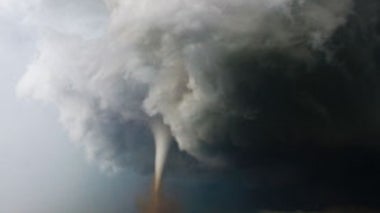 What Role Does Climate Change Play in Tornadoes?

The twister that struck Moore, Okla., was the deadliest U.S. tornado since one killed 161 people in Joplin, Missouri, two years ago

May 21, 2013 — Alice Mannette, Ian Simpson and Reuters
The Sciences

Can Tornado Prediction Be Improved?

Getting to the Core of Twisters

In VORTEX2, the largest scientific study of tornadoes, scientists are trying to understand just what causes a twister to form. It's more complicated than you might think. Christie Nicholson reports...

Large-scale, upper-level atmospheric disturbances could be used in forecast models to better predict the initiation of storms

The Science of Tornadoes

How funnels form, what drives tornado activity, and what scientists are doing to better understand them--our collection of articles, video and podcasts explain the basics