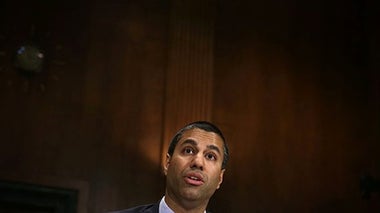 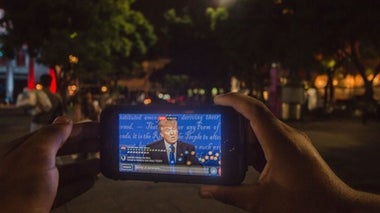 The new administration will likely defang efforts to enforce Net neutrality and online privacy protections, and potentially ramp up domestic and international surveillance

Broadband Internet access will be reclassified as a telecom service under a modified set of rules. Court battles and more Congressional hearings to follow

Recent U.S. Senate and FCC activity favors large Internet companies at the expense of their customers

March 29, 2017 — Christopher Ali and The Conversation US
Tech

How Will the Fight over Public ISPs and Net Neutrality Play Out?

As readers of this blog know, since 2005 I’ve been teaching at Stevens Institute of Technology in Hoboken, New Jersey. One of the best parts of being an academic is hanging out with cool (compared to me), young (compared to me), up-and-coming scholars, some of whom know far more about the history of science and [...]..

President Obama announced his support Monday for net neutrality. And Texas Republican Senator Ted Cruz let loose one of his biggest howls, tweeting: “Net Neutrality” is Obamacare for the Internet; the Internet should not operate at the speed of government...

The Internet Doesn't Have to Be Free

A brief history of the war for Net neutrality

Long Live the Web: A Call for Continued Open Standards and Neutrality

The Web is critical not merely to the digital revolution but to our continued prosperity—and even our liberty. Like democracy itself, it needs defending

Not Neutrality?: U.S. Weighs Options for Turbo-Boosting Nation's Broadband into the 21st Century

The controversial measure will let broadband providers prioritize Internet content, but detractors say the government is fixing something that is not broken

The Net Neutrality Debate in 2 Minutes or Less

Who gets to control what's passing through those pipes?

Net Neutrality in a Nutshell

What is net neutrality and why is it making news lately? Tech Talker explains.

Nobody Is Neutral When It Comes to Net Neutrality

Romney Says No to "Net Neutrality"

Information Doesn’t Want to Be Free: Laws for the Internet Age [Excerpt]

Distribution companies’ digital locks are like roach motels: Copyrighted works check in but they don’t check out

How to Build a Smarter Internet

To keep the Web from collapsing under the weight of ever more data, the network needs to radically change the way it handles information, says the head of Bell Labs Research

When Will the Internet Reach Its Limit (and How Do We Stop That from Happening)?

A global computer-based communication network has fundamentally changed our social, cultural, and political landscape over the past 20 years.  As an evolutionary anthropologist, I have to point out that there has been no previous communication revolution of this speed or intensity.  Consequently, this communication tool gives us the power to completely restructure our entire existence, [...]..

Why Broadband Service in the U.S. Is So Awful

And one step that could change it

Content Is King: Can Researchers Design an Information-Centric Internet?

The ruling in favor of corporate broadband providers may not only up consumer costs but also cripple start-ups, which may stifle the kind of innovative content that has made the Web an essential service...

Out with the Old: As Internet Addresses Run Out, the Next-Generation Protocols Step Up

Get ready for IPv6: The explosive global growth of connected devices has nearly depleted the 4.3 billion addresses of Internet protocol version 4

The (good and bad) future of the Internet

Who Are the Winners and Losers under ICANN's New Web Site Naming Rules?

Re-thinking the Internet with security and mobility in mind

Future of the Internet: Net Neutrality, the Semantic Web, plus some comments on science by the mayor of New York.

In this episode, Jeff Chester, executive director of the Center for Digital Democracy, talks about legislation that will decide the future of "network neutrality." Net neutrality means that transmission rates to and from all websites are the same, rather than some websites being able to steer traffic their way through faster rates...