Can You Escape Zombies If You Smell Like Death?

A chemist explains why a "death cologne" could protect you if the ravenous undead attack this Halloween. 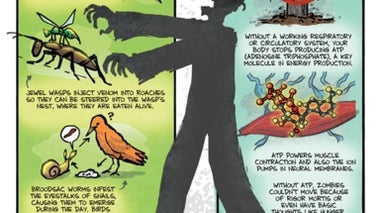 The answer depends on your definition of zombies. 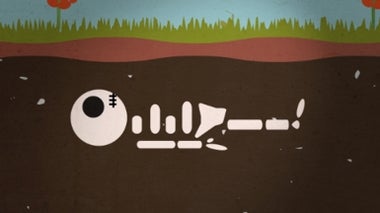 What Happens to Your Body after You Die?

Whatever your beliefs, most people would agree that the body left behind when we depart this mortal coil is just a heap of bones and flesh. But what happens to those leftovers?

What Happens to Consciousness When We Die

The death of the brain means subjective experiences are neurochemistry

Zombies. They’re everywhere. My dentist and his assistant spent my last visit and chatting about The Walking Dead while drilling into my head, and it seems like every reasonably large town hosts a zombie run...

The Walking Dead Shuffles Into Science Education With Bolts, Brains, and a Physics Quiz

In what has to be a win for science communication, AMC—the cable network behind the wildly successful zombie comic adaptation The Walking Dead—has decided to partner with an online instruction company and the University of California-Irvine to create a zombie-themed interdisciplinary course...

Zombie Ants and a Cultural Obsession

You’re in a dark forest, surrounded by misty fog and strange animal noises. You’re on a mission, jumping over traps and snares in search of something you’ve lost dear to you.

It may sound like something straight out of a horror movie, but many animals can come under the zombie-like control of parasites. So what about humans? Scientific American editor Katherine Harmon fills us in on the ghoulish side of Nature...

I'm really loving the new `Reactions` series from the American Chemical Society. Those of us involved in the world of science communication are well aware that effective science-storytelling involves a lot of creativity and style...