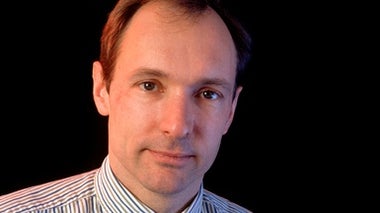 The Mind Behind the Web

Tim Berners-Lee invented the World Wide Web and continues to shape its frantic evolution. He's neither rich nor famous, which is fine by him

The Web Turns 25…Sort Of

In March 1989, Web inventor Tim Berners-Lee proposed a way to link together documents on different computers that were connected to the Internet.

Computer scientists, engineers and journalists converged on the CERN particle physics lab in the suburbs of Geneva, Switzerland, today to pay homage to a piece of paper—several pieces of paper, actually—that together form Tim Berners-Lee's March 1989 proposal that would come to be the blueprint for the World Wide Web...

How Hackers Take Down Web Sites

Many of the Web sites we visit every day are under cyber attack by malicious hackers looking to disrupt business transactions, discourage people from using a particular online service or exact payback for some real or perceived slight...

A Science of the Web Begins

Remembering the Day the World Wide Web Was Born

What drove Tim Berners-Lee to imagine this game-changing model for information sharing, and will its openness be its undoing?

How the Large Hadron Collider Might Change the Web

All Together Now: Unleashing the Web's Synergistic Possibilities

Understanding how novelty emerges from complex systems is a new frontier

Web Science: Studying the Internet to Protect Our Future

Millennium Foundation Recognizes Inventors and Technologies That Changed the World

Scientists at Bell Labs, Harvard--M.I.T. and the University of Leicester are among the finalists for the $1.8-million Finnish award

We are the world: Web's designer launches foundation to bring invention to all

Facts about the Web's Creation

Everything you ever wanted to know about the Web's first days

M.I.T.'s Laboratory for Computer Science is developing a new infrastructure for information technologies--the Oxygen system--that promises to realize a vision long held by the lab's director: helping people do more by doing less...

The Semantic Web in Action

Corporate applications are well under way, and consumer uses are emerging