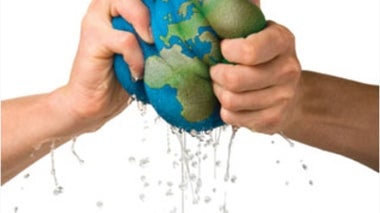 As demand for freshwater soars, planetary supplies are becoming unpredictable. Existing technologies could avert a global water crisis, but they must be implemented soon

Test your knowledge about water and its use

Why don't we get our drinking water from the ocean by taking the salt out of seawater?

Peter Gleick, president of the Pacific Institute, distills an answer:

Top 10 Water Wasters: From Washing Dishes to Watering the Desert

The many ways we squander water, from unintentional leaks to outright negligence

Get Involved in Freshwater Conservation

Scientific American editor Steve Ashley talks about the future of fresh water and the steps we can take to ensure that we all have potable water in the years ahead. Steve Mirsky reports...

Lots of Water, but Not Always Where It Is Needed

If the world hopes to feed its burgeoning population, irrigation must become less wasteful and more widespread

The Challenge of Sustainable Water

Water supplies around the world are already severely stressed. Population growth and global warming will only worsen those problems

We drink it, we generate electricity with it, we soak our crops with it. And we're stretching our supplies to the breaking point. Will we have enough clean water to satisfy all the world's needs?...