The image above contains one actual mirror and three empty frames. Can you work out which is which? The visual riddle is the creation of Matt Pritchard, a magician from the U.K., who won second prize in the 2020 Best Illusion of the Year Contest with a related puzzle.

The conundrum highlights our perceptual limitations regarding mirrors. Despite our seemingly unlimited everyday experience with reflecting surfaces, it turns out that most of us understand ordinary mirrors much worse than we think.

Pritchard’s discovery was serendipitous. He was handling the frame of a broken mirror when, looking through the empty square, he mistakenly believed that he was looking at a reflection. “It was a lovely reality-twisting moment,” Pritchard recalls. The next day he set up to reproduce the effect with the same empty frame, twin cans of soda, and cutouts of colored paper. “The illusions with Coke cans led me down the path of playing with various mirror-related illusions and exploring various ways to trick the brain.”

Pritchard’s mind-bending experience might be more common than one might imagine. In 2016, while remodeling their kitchen, psychologist F. Richard Ferraro and his wife, Jacqueline Lee Foster Ferraro, accidentally placed two identical lamps at both sides of a pass-through opening connecting their living room to the kitchen. Although the couple knew that they owned both lamps, they could not help but feel that they were looking at a single lamp and its reflection. In a subsequent paper published in the journal Perception, they proposed that their misperception could be explained by the so-called simplicity principle.

According to the simplicity principle, our brains prefer the simplest explanations for the objects in our visual environment. “In everyday life, it’s unlikely [that we] find symmetry like this, unless there has been an intentional design behind it, or there’s a mirror between the two sets,” Pritchard explains. In other words, we are more often right than wrong when we guess that a symmetrical arrangement indicates a single object and its reflection, rather than two disconnected objects at either side of a frame.

Pritchard reports that the illusion is largely robust to viewing angle, binocular vision, and even small discrepancies between an item and its “reflection.” But several questions remain unanswered. “How did this mirror assumption arise? From an evolutionary perspective … mirrors are a relatively recent invention. At what stage of human development do we learn about mirrors?” Pritchard wonders. 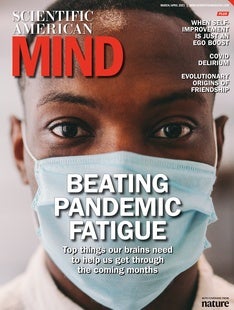