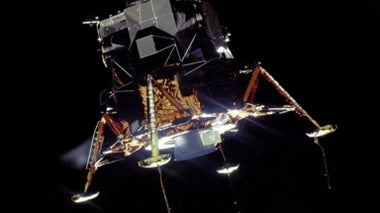 For Neil Armstrong, the First Moon Walker, It Was All about Landing the Eagle

Boulders, a crater, moon dust and an overworked computer all stood in the way of humankind's first lunar touchdown

Down to Earth: The Apollo Moon Missions That Never Were

As the U.S.'s lunar landing program wound down, plans for its last three Apollo missions were canceled, leaving unused hardware and questions of what might have been

A son of the Cold War tells what it was like from the losing side of the Space Race--and how the U.S.S.R.'s space program fizzled after Sputnik and Gagarin

Buzz Aldrin recalls the simple strangeness of being on another world, such as how the dust rose and fell differently on the moon with each footfall. Steve Mirsky reports

Apollo and the Moon: The Astronauts' View [Slide Show]

On the 40th anniversary of Apollo 11, NASA produces a book of photographs curated by Apollo veterans

Space Geology: From the Moon to Mars

Stargazers will have the opportunity to get their hands on photos, charts, models and other space race relics from NASA missions thanks to an auction to commemorate the Apollo 11 moon mission...

Can space-faring companies be entrusted with the Apollo program's history?

As private enterprises set their sights on space, once the sole domain of the superpowers, questions are arising about who will protect historical sites and artifacts on the moon.

We look at the contents of the July issue of Scientific American magazine, the last under outgoing Editor in Chief John Rennie, including an article by moon explorer Harrison Schmitt, a piece on the fight against superbugs, a report on the potential of biofuels such as grassoline, and a recollection of the pernicious effects of chess!...

To the Moon and Beyond

Humans are returning to the moon. This time the plan is to stay a while

What's the Buzz: A Conversation with Buzz Aldrin

Buzz Aldrin, the second man to walk on the moon, talks about solar energy, buses between the planets, the Constellation program, his time on the moon and his new animated movie, Fly Me to the Moon ...

Emotions recalled in the Sea of Tranquility

Tiny dust grains, empowered by the sun, pose big problems on the moon

Apollo 17 astronaut Harrison Schmitt called it the biggest environmental problem on the moon. His crewmate Eugene Cernan said it was "probably one of our greatest inhibitors" to lunar operations...

The Latest Buzz: Aldrin Flies to the Moon Again

As a new film on the Apollo 11 mission is released, the second man on the moon tells ScientificAmerican.com what he thinks of NASA's current direction

The 40th Anniversary of Apollo 8's Journey to the Moon

It was a first not only for NASA, but for humanity. As the world bore witness, a redesigned Apollo spacecraft, tested in space with a crew only once before, carried three astronauts to orbit the moon...

The Exploration of the Moon

The successful mission of Apollo 11 opens an epoch of planned lunar exploration. What questions should this exploration seek to answer, and what areas of the moon should be visited to best confront them?...

40 years after the first moon walk, designers and engineers discuss the continuing evolution of astronaut apparel