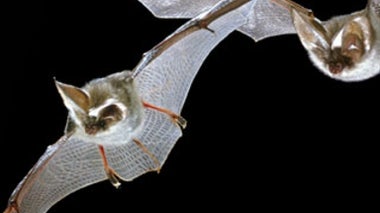 At last, fossil and genetic findings elucidate the evolution of bats--and settle a long-standing debate over the origins of flight and echolocation

Winged Superlatives: The Ancient and Modern Diversity of Bats

Which bat would be voted "most likely to eat insects" in their high school yearbook?

Dark Knight Shift: Why Batman Could Exist--But Not for Long

Medical Mystery: Only One Person Has Survived Rabies without Vaccine--But How?

Bat's Wing Strokes Unlike a Bird's

Fog and lasers reveal the wind beneath a bat's wings

Natural reservoir for emerging viruses may be bats

For Bats, Navigation Is a Problem of Statistics

The lethal "flying fox" virus may spread between people

Nectar-feeding bats, which have to hover, go through sugar three times faster than even world-class athletes. Steve Mirsky reports.

On a Wing and Low Air: The Surprising Way Wind Turbines Kill Bats

Researchers look beyond white-nose syndrome as the prime suspect in the mysterious deaths of bats in the U.S. Northeast

Bats Flew Before They Could Echolocate