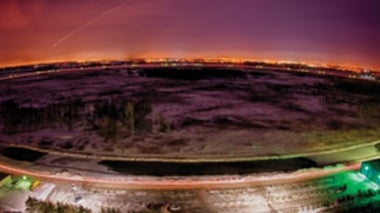 Waiting for the Higgs

Even as the last protons spin through the most successful particle accelerator in history, physicists hope to conjure one final triumph

The Tevatron: Three Decades of Discovery

Notable events from the 32-year history of Fermilab's Tevatron, which reigned as the world's most powerful collider for years

Tevatron Collider Set to Shut Down for Good on Friday

The Discovery of the Top Quark [From the Archive]

Fermilab finds the top quark—sort of

Opposite Spins: The LHC Accelerates Higgs Search as the U.S. Shutters Its Tevatron

Europe's Large Hadron Collider is extending its unprecedented experimental run as the U.S. prepares for a disappointing shutdown of its marquee collider

Inside the Tevatron; the Human-Computer Interface; DNA Computing.

In this episode, Scientific American editor Mark Alpert talks about his trip inside the Tevatron, the world's most powerful particle accelerator, at the Fermi National Accelerator Laboratory, and the future of the Tevatron, specifically for neutrino research...

Evidence Mounts for New Physics via the Tevatron Particle Collider

The hunt for the long-sought-after particle continues in the U.S. as the Large Hadron Collider in Europe lies dormant

What's the matter with antimatter? New data may hold the answer.

Alone at the Top

Fermilab says: "Hey wait, we're in the Higgs hunt, too!"

What Happens to Particle Accelerators After They Are Shut Down?

Radioactivity limits the potential for recycling, except for one infamous particle smasher that never saw the light of day

In praise of the Tevatron