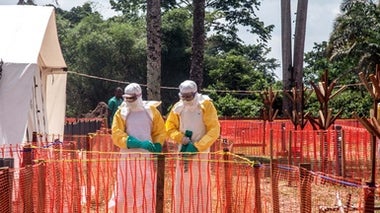 New Ebola Outbreak Declared in the Democratic Republic of the Congo

Experimental therapies, shipped to the DRC for its last outbreak, are still in the country 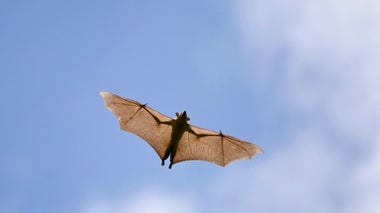 Why Does Ebola Keep Showing Up in the Democratic Republic of the Congo?

The country has been roiled by nine outbreaks of the disease 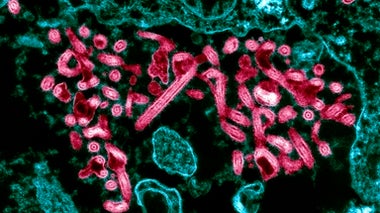 Everything You Need to Know about the Ebola Vaccine

A Day in the Life of an Ebola Worker

Denial, violence and fear make it difficult to stamp out Ebola in west Africa

A combination treatment of antibodies and virus-fighting proteins prevented death from the Ebola-Zaire strain in some primates, even when administered three days after infection

Are U.S. Hospitals Prepared for the Next Ebola Case?

Health care emergency management expert Kristin Stevens tells us what went wrong in Dallas, and how we can do better

The newly developed device improves survival in rats after severe infections with everything from E. coli to Ebola

In the two days since the second U.S. Ebola patient was diagnosed, the U.S. Centers for Disease Control and Prevention (CDC) has assembled a new team to battle the threat of Ebola.

All last week CDC officials reiterated their conclusion—based on nearly 40 years worth of successfully containing past outbreaks—that you cannot catch the Ebola virus from people who are infected unless they have already begun suffering a fever or started showing other signs of illnesses...

David Quammen: The Spillover of Animal Infections to Humans

David Quammen talks about his latest book, Spillover: Animal Infections and the Next Human Pandemic . From his Web site: "The next big and murderous human pandemic, the one that kills us in millions, will be caused by a new disease--new to humans, anyway...

Ebola by the Numbers: The Size, Spread and Cost of the Outbreak

As the virus spreads in West Africa, a graphic offers a guide to the case count and transmission figures that matter

Techniques used in the U.S. to treat symptoms and subdue the virus in patients could work overseas, Bruce Ribner says

The virus spreading in Guinea, Liberia and Sierra Leone has led to food shortages and neglect of other devastating tropical illnesses

Everybody and his uncle, it seems, has an idea of something that might work to cure people infected with the deadly virus

Infected gorillas and chimps butchered for meat may be behind Ebola outbreaks. David Biello reports

Ebola in the U.S. – Politics and Public Health Don't Mix

“Against stupidity, even the gods strive in vain.” — Fredirich Schiller I've been glued to the Ebola news, riding the roller coaster of emotions.

Ebola May Leave Survivors with Lasting Problems in Brain, Nerves

Among a group of 82 Ebola survivors in Liberia, nearly all had some neurologic problems six months or longer after they were infected

The WHO and the CDC have revised guidelines on personal protective equipment for health care workers, but concerns over wearing too much or too little gear persist

There is little risk of the deadly virus spreading to the U.S., experts say

A Spanish nurse who contracted the virus is just one of hundreds infected while battling the deadly disease, often with substandard equipment and safety protocols

Ebola Strikes a Blow against Pregnant Women and Maternal Care

Fact or Fiction?: The Ebola Virus Will Go Airborne

Why do some viruses go airborne? Will the pathogen causing the west African outbreak be one of them?

Sleeplessness, along with abdominal and joint pain are common even months after recovery from the dreaded virus

Two people in the southern region of Nzerekore, where the Ebola outbreak began in 2013, have tested positive for the virus

Hints of Progress in the Ebola Fight

The number of Ebola cases appear to be dropping in Liberia—but what will it take to stamp out the disease?

Hospitals Need Time, Training to Get Ready for Ebola

New Ebola guidelines for hospitals may help, but workers need training and support to be adequately prepared for new cases

Hospitals on the Lookout for Ebola Patients

Howard University Hospital in D.C. is the latest facility to report a suspect patient in isolation, but so far only a Dallas visitor has tested positive for the virus

How Did a Dallas Nurse Catch Ebola?

Health authorities scramble to figure out what went wrong with containment

How Did Nigeria Quash Its Ebola Outbreak So Quickly?

What we can learn from the boot leather, organization and quick response times that stopped Ebola from spreading in this African nation

What Can Be Done with All the Ebola Waste?

An Ebola patient produces up to 40 times more waste than other patients. This and other challenges, including too-small airstrips, complicate the fight against the virus

Scientists report that domestic pigs harbor Reston ebolavirus, the only Ebola species that has not caused disease in humans

As fewer people get sick, the trials may need to include more participants than planned to deliver usable results

By attacking the body's first responders, the virus cripples the immune system before it can mount an effective defense

Is Ebola Here to Stay?

Why scientists continue to be perplexed by how to define the outbreak that has killed 7,000

Is the Blood of Ebola Survivors an Effective Treatment?

When the World Health Organization recently named blood transfusions from Ebola survivors as its priority experimental therapy for the disease ravaging west Africa there was only one major problem: no data indicating that such transfusions work...

Largest Ever Ebola Outbreak Is Not a Global Threat

Although the virus is exerting a heavy toll in West Africa, it does not spread easily

As more patients recover from the infection, what risk do they pose to their sexual partners?

The World Health Organization is testing a handful of experimental vaccines. Hundreds of thousands of doses could be available before the end of June

Motorcycling to Ebola Treatment Could Spread the Infection

Can beefed up U.S. aid stem the tide of Ebola deaths in the months ahead?

Patient Zero Believed to Be Sole Source of Ebola Outbreak

By pinpointing the virus’s source, a new report validates steps health care workers are taking to battle the disease

Quarantines and Travel Bans: Could They Work to Thwart Ebola?

What rules are in place to prevent pandemics?

Finding could lead to new therapies to thwart spread of this contagious, and mostly fatal disease

Health authorities in Spain have confirmed that a health worker at the Carlos III Hospital in Madrid, Spain has been infected with the Ebola virus.

The Ebola Outbreak: Hopeful News from the Front Lines

The coverage of the Ebola outbreak in West Africa by U.S. media has often seemed unremittingly grim. So it was with some trepidation that I boarded a plane for Sierra Leone.

The Most Memorable Moments of the Ebola Response [Video]

U.N. Panel Says It Is Ethical to Dole Out Experimental Ebola Drugs

Supplies are limited, and deciding who gets treatment is difficult

President Obama has pledged up to 3,000 personnel as well to stem the outbreak in West Africa

Weaponized Ebola: Is It Really a Bioterror Threat?

What would it take to hijack the virus in west Africa and turn it into a bioterror agent elsewhere?

Health care is decimated, leaving the region more vulnerable than ever to infectious diseases

What Makes a Hospital “Ebola Ready”?

What Will It Take to Contain Ebola in West Africa?

When Ebola Came to Liberia

Where Does Ebola Come From?

New clues from Guinea yield tantalizing pieces of the puzzle

Where Does Ebola Hide?

Why Ebola is a Wake Up for Infection Control

Just as the CDC’s and other experts’ thoughts on Ebola and infection control have evolved with experience, mine have taken a slight twist as well.

From Liberia in an exclusive Scientific American report, victims say they are tormented by brain deficits and more. A new study hints at hidden virus remnants or immune system overreactions...