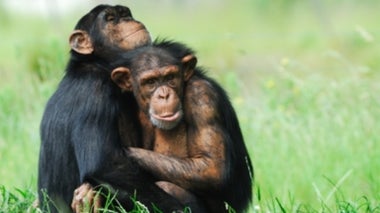 All In The Family

What persuaded the male hominid to stick around after mating?

Helen would never have yielded herself to a man from a foreign country, if she had known that the sons of Achaeans would come after her and bring her back.

Seeds of Destruction: Mating Opportunities as Motivation for War

What the small-brained hobbit reveals about primate evolution

Is bigger always better? When it comes to brain size, that has long been the prevailing theory—at least among big-brained humans. But a new analysis shows that in the course of primate evolution, brains and brawn haven't always been on the rise...

May 16, 2013 — Chris Palmer and Nature magazine
The Sciences

Why Humans Are Important to Studies of Primate Diversity

It is not in the least bit controversial to picture humans* within the context of the placental mammal group that we belong to, the primates.

The Case of the Missing Polygamists

The origins of our sexuality is the greatest mystery in human evolution. But could our prime suspect be a case of mistaken identity?If reproductive success were applied to fiction the two billion copies of Agatha Christie's novels (only trailing behind Shakespeare and the Bible) would be considered a stunning example of evolutionary fitness...

Humans do it. Our great ape cousins, the bonobos, do it. Now researchers have documented western gorillas mating face to face in the wild.

A study published online in the journal Public Library of Science finds that male chimps who provide meat for females double their chances of mating over the long term. Steve Mirsky explains, with reporting by Adam Hinterthuer...

An account of some curious preliminaries to mating among birds, insects and spiders, with particular reference to the influence of vision

The Courtship of Animals

The elaborate patterns of behavior that precede mating in some species present a puzzling biological problem. Their function is sought through the classic interplay of theory and experiment...

The Origin of Society

As prehuman primates evolved into men, how did the primate horde evolve into the human band? One of the key changes seems to have been the subordination of sexual drives to the needs of the group...

The Importance of Being Sneaky

Dominance may not be key to mating of rhesus macaques