Introducing the Science of Pro Football

What does Sir Isaac Newton have to do with gridiron glory? Plenty, it turns out. In a special partnership with NBC Learn, we present supplemental information for the educational video series, "The Science of NFL Football"... 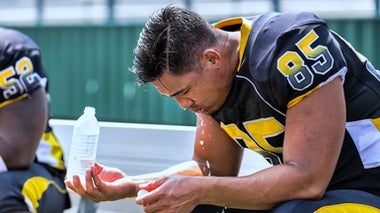 How Much Water Weight Can a Player Lose During a Game?

Your body's center of mass is near your belly button, but things change if you're interacting with another person

How Can a Slower Runner Catch a Faster One?

Acceleration is the key for a predator chasing down swifter prey

How Much Momentum Does It Take to Stop a Running Back?

From a physics perspective, football is all about overcoming inertia

How Should You Launch a Ball to Achieve the Greatest Distance?

Physics gives a precise answer, at least in an ideal setting

When Is a Straight Line Not the Shortest Distance between Two Points?

What Are Vectors, and How Are They Used?

Denoting both direction and magnitude, vectors appear throughout the world of science and engineering

Why Do Pro Kickers Opt for Soccer Style?

The answer lies in surface area and biomechanics

What Do a Submarine, a Rocket and a Football Have in Common?

Why the prolate spheroid is the shape for success

Sports psychologist Patrick Cohn discusses two types of athletes, and how to deal with pressure in the days before the big game. Christie Nicholson reports

If the stats favor going for it, why are coaches so wary?

Who Will Win: A Squirrel, an Elephant, a Pig or a Safety?

What kind of fuel do rockets use and how does it give them enough power to get into space?

Deep in thought: What is a "law of physics," anyway?

One thing that's both disconcerting and exhilarating about physics is how many seemingly simple questions remain unanswered. When you hear the questions that physicists struggle with, you sometimes say to yourself, Wait, you mean they don't even know that?...

To what degree is a person's body weight affected by the ambient temperature and humidity? Do we conserve or release water as the climate changes?