A Tribute to All 135 of NASA's Space Shuttle Missions [Video]

Now that Atlantis has safely returned to Earth and the 30-year space shuttle program has drawn to a close, it's time to look back at the reign of Discovery, Atlantis, Endeavour and the tragically shortened careers of Challenger and Columbia ... 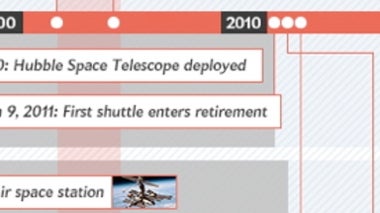 Los Angeles, New York City, Virginia and Florida will each get a spacecraft from the shuttle program

When space shuttle Atlantis rolls to a stop at the end of its current mission, the only remaining U.S. spacecraft capable of taking astronauts to orbit will be powered down for good.

There is a certain sense of unreality as I sit this morning at the Kennedy Space Center press site, with Atlantis on the launch pad just over three miles away awaiting its last mission (STS 135), NASA Deputy Administrator Lori Garver finishing a briefing on NASA's ambitious plans for the future, a hundred enthusiastic young people from all over the country gathered for a "Tweetup" to communicate their impressions of being at a launch—while in Washington, D.C., the House Appropriations Committee apparently is intending today to cut almost $2 billion from NASA's budget...

On the eve of the launch of the penultimate space shuttle mission, STS-134, Scientific American astronomy editor George Musser talks to veteran astronaut Stanley Love about being in space and the future of spaceflight...

The laws of physics are easy; it's economics that vexes NASA

Why Does the Space Shuttle Launch Countdown Have So Many Stops and Starts?

KENNEDY SPACE CENTER— Atlantis lifted off Friday at 11:29 A.M. Eastern time after a last-moment hold at 31 seconds on its 33rd and final mission—both for it and NASA's 30-year-old manned space shuttle program, putting on hiatus the era of human access to low Earth orbit on board U.S...

Truckin' Up to Low Earth Orbit, Part 1: The Shuttle Era Is Go for History

This is the first of a three-part series that looks back at the 30-year tenure of the U.S. space shuttle program. "The orbiter is a completely different vehicle than anything that has ever flown in space...

This is the second of a three-part series that looks back at the 30-year history of the U.S. space shuttle program. Any summary of the shuttle program cannot go on without mentioning 14 lost astronauts and two doomed vehicles— Challenger on launch in 1986 and Columbia on reentry in 17 years later...

Truckin' Up to Low Earth Orbit, Part 3: The Shuttle Gives Science a Boost

This is the third of a three-part series that looks back at the 30-year history of the U.S. space shuttle program. Before the 1986 Challenger disaster made safety paramount and new constraints had been established, the shuttle could carry fueled upper-stage rockets to launch space probes, which embarked for planetary destinations...

Why Does NASA Launch Space Shuttles from Such a Weather-Beaten Place?

With Endeavour enduring multiple scrubbed launches because of storms, why does the U.S. choose to launch from Florida?

When Discovery touches down, it will become the first of NASA's three remaining space shuttles to enter retirement. Where will they all end up?

Living Interplanetary Spaceflight Experiment--or Why Were All the Strange Creatures on the Shuttle Endeavour?

This morning, the world witnessed the safe landing of the space shuttle Endeavour, after a 16-day mission to the International Space Station. For those of us inhabiting Earth’s more western time zones, we got to watch the landing last night, with no inconvenience, other than having to divert from the Colbert Report...

The space shuttle's final flight, and Scientific American will be there

If Atlantis were lifting off on any other flight, its space station resupply mission would be considered routine at best, mundane at worst. No doubt, it would be given only cursory coverage by the mainstream media...

NASA's shuttle program counts down 'til the end

KENNEDY SPACE CENTER—If I'd jumped, I could have touched the belly of the Discovery. Of course, I would have then been escorted unceremoniously from the Orbiter Processing Facility...

On Its Final Mission, Atlantis to Help Ready NASA for Post-Shuttle Era

Status Report on the Launch of Atlantis: A Perfect Liftoff

KENNEDY SPACE CENTER— Shuttle a Go-Go Atlantis lifted off Friday at 11:26 A.M. Eastern time after a last moment hold at 34 seconds on its 33rd and final mission—both for it and NASA's 30-year-old manned space shuttle program, putting on hiatus the era of human access to low Earth orbit on board U.S...

Atlantis Launch Notes: July 8, 9:00 P.M.KENNEDY SPACE CENTER—What a day it was. One to which I’ll dedicate lots of long-term memory neurons.

Notes from the Ground: A Visit to the Launch Pad

Atlantis Launch Notes: July 7, 6:00 P.M.KENNEDY SPACE CENTER—At T-11 hours and holding all day (as usual, a planned halt). Just got back from the launch pad—and just in time, seems lightning hit within a third of a mile from the shuttle...

Notes from the Ground: One Day to Go to Final Shuttle Launch

Atlantis Launch Notes: July 7, 9:00 A.M.KENNEDY SPACE CENTER—As of now, NASA's final space shuttle launch is still on for Friday at 11:26 A.M. Eastern time, but a gathering storm bearing down on Florida's Space Coast remains a major concern.While waiting on a go/no-go decision from the mission managers yesterday afternoon, I decided to take a little field trip thrown by the people at SpaceX, the builders of the Falcon rocket and Dragon capsule, slated to carry cargo—and later up to seven crew members—to the International Space Station (ISS).Interviews and tours for the press brought me face to face with the Dragon capsule, which, at least in appearance, recalls both Apollo and the new Multi-Purpose Crew Vehicle...

It took space shuttle Discovery several months to get off the ground on its final mission, but the shuttle's landing came off without a hitch. Discovery touched down on schedule, just before noon March 9, putting an end to its 26 years of service, in which the orbiter made 39 trips to space and logged more than 230 million kilometers...

Pres. Obama's budget proposal for fiscal year 2010 throws White House support behind two of the more controversial NASA plans of the Bush era: retiring the space shuttle in 2010 and returning humans to the moon by 2020...

Next Generation: We Want a Spaceship, Not a Freight Truck

CAPE CANAVERAL -- I took this picture last night, and I don’t like it very much.

Let’s set aside discussions of artistic merit and admit that it’s a pretty dreary view of the last functioning space shuttle perched on its launch pad...

Dad, the Apollos and the End of Space Shuttle Era Sadness

I can't even recall a time that I wasn't cognisant of the fact that I lived in a country that actively pioneered space exploration. I remember sitting on wicker hassock in my Dad's study, as a child and asking lots of questions...

At the #NASAtweetup for the Last Shuttle Launch

Imagine a dark haired little girl of not quite four years old, playing outside in a cotton dress in the warm dusk of July 30, 1969, in Albuquerque, New Mexico.