Bottled water sales are booming worldwide. It is now the most popular drink in the U.S., with consumption growing every year. It is portable, safe, and easily stored. It is also arguably the most unnecessary consumer product — a drink available in most places from the tap for free, packaged and shipped at great cost to the environment, and sold at exorbitant prices.

Understanding the drivers of bottled water consumption is a first step to making the industry more sustainable. Andrew Szasz, a sociologist at UC Santa Cruz who has studied the bottled water phenomenon for more than a decade, contends that the industry emerged because people began to distrust their local water sources. Lured by slick marketing, consumers turned to bottled water to protect themselves from perceived threats. The water poisoning  crisis in Flint, Michigan, has added to consumers’ concerns.

Szasz describes the phenomenon as an example of an “inverted quarantine.” People are fearful of environmental threats, and rather than tackle the problem head-on, through political action, they attempt to buy their way out of disaster. “It’s a perverted form of environmentalism where instead of taking on the problem, you create this clean consumable bubble around yourself,” he says. “Bottled water is an imaginary refuge. You get the illusion that you’re protecting yourself.” He also notes the role that the labels play, featuring nature images in greens and blues, pictures of snowy mountains, and words like ‘pure.’ “The bottle itself sends a message,” he says. “This must be pure because someone took the trouble of isolating it from the environment.”

The plastics used for bottled water take another huge environmental toll. Nearly 14 billion gallons of water were sold in the U.S. 2017 (see ‘US Bottled Water Consumption’), 70 percent in single-serving plastic bottles, typically made from polyethylene terephthalate (PET). All told, about 20 billion plastic water bottles are used each year. About 54 percent of them are recycled. 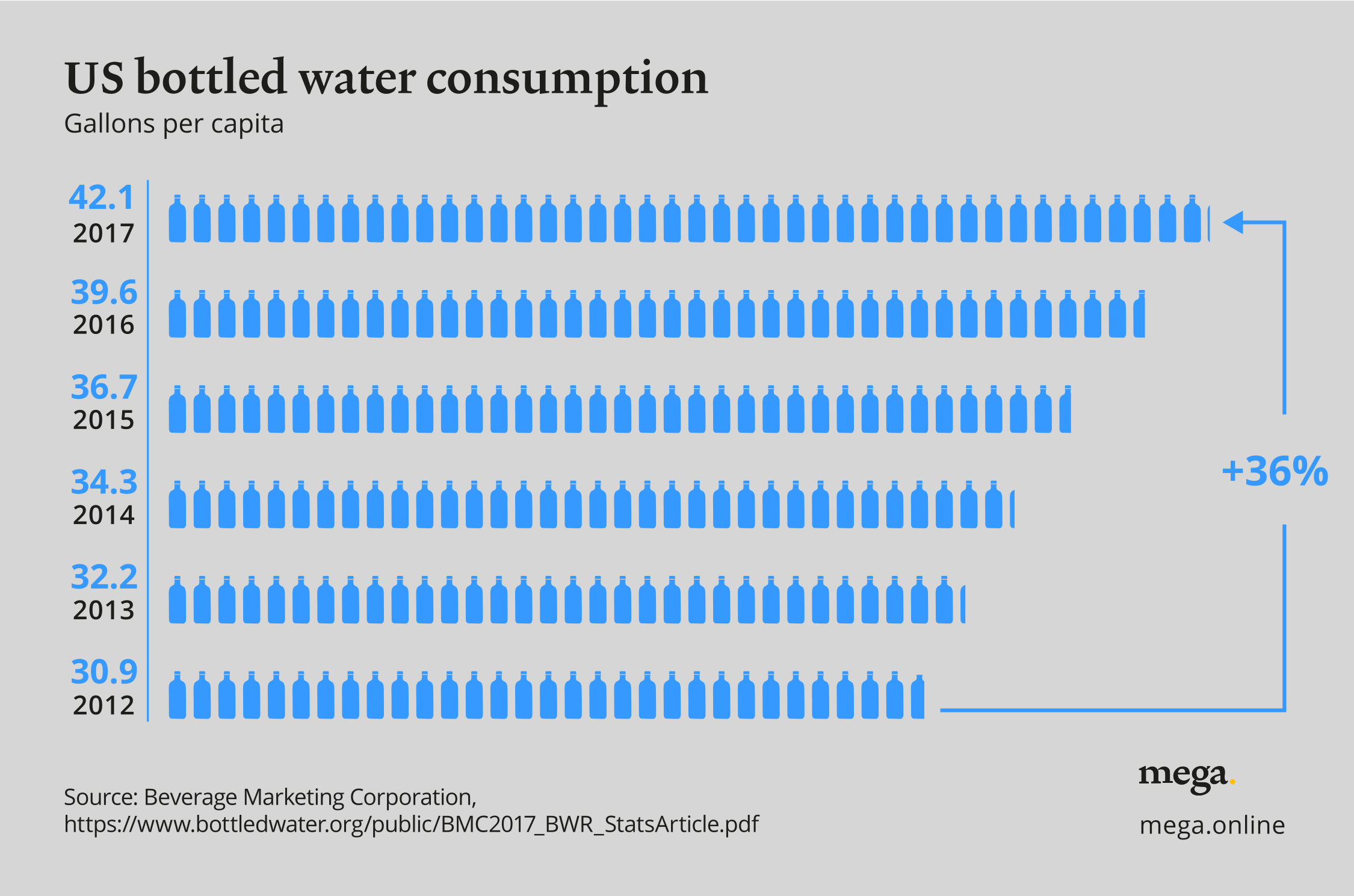 As the industry has grown, so has the backlash. Some environmental groups are calling for total bans on sales of bottled water.  The Natural Resources Defense Council says, “the best thing we can do to protect our waterways is try to keep as much plastic as possible out of the waste stream in the first place.” It recommends that people stop buying bottled water and instead carry a reusable bottle to fill from a tap.

These calls are being heard in the bottled water industry. Companies including Nestle, PepsiCo, The Coca-Cola Company, Dr Pepper Snapple Group, and Keurig have a clear incentive to design better alternatives to business as usual.  Many of them have made sustainability officers part of their C-suites and given them a voice in strategic planning.

Of these companies, Nestlé is the biggest distributer of bottled water, with 10 brands in North America alone, including, Nestlé Pure Life, Poland Spring, Perrier, and S. Pellegrino.

Recycling is an area that David Tulauskas, chief sustainability officer for Nestlé Waters North America, takes seriously. While in theory PET can be recycled and reused again and again, it often ends up as lower grade plastic. “Part of our challenge is just ensuring that bottles remain at the highest level,” he says.

Nestlé Waters North America has committed to making 50 percent of its water bottles out of recycled PET by 2025, with an interim goal of 25 percent by 2021—roughly four times the amount of rPET it uses today. Its Poland Spring brand will use 100 percent recycled plastic by 2022.

Nestle is working closely with plastics processors “to give them the confidence that there’s the market” for high-grade recycled material, says Tulauskas. They shred the bottles, clean them and send them to a resin manufacturer, who will keep this material separate. “That’s when we get the crystalized PET back,” Tulauskas says. Nestle’s aim is to give rPET suppliers long-term contracts to provide incentives to invest in the technology.

Still, even high-tech sorting facilities and futuristic plastic recyclers can only go so far. First, consumers have to commit to putting their plastic bottles in the recycling bin to begin with. About half of all plastic produced today is used once and then discarded. Tulauskas says his company is trying to change that. Nestle partners with Keep America Beautiful, a 66-year-old nonprofit that works to help teach people about how and how they should recycle.

Changing consumer decisions is the hardest part of the equation, and certainly beyond one company’s control. But what the industry can do is make sure its practices are as sustainable as possible in order to provide clean and safe drinking water with minimal environmental damage.