China is hungry for power. A fast expanding middle class is driving relentless demand for electricity. Annual electricity consumption is growing by around 8 per cent, according to the Chinese National Energy Administration—twice the rate in the United States.

This demand needn’t be polluting. China has the capacity to generate the electricity it needs from its hydroelectric plants. Unfortunately, these plants are mainly far from the coastal urban centres that consume much of the country’s power.

China’s response has been to use advanced power transmission technology that can bridge vast distances – technology that, ironically, harks back to the earliest days of electric power.

In 2010, it became the first country to adopt ultra-high-voltage direct current (UHVDC). Although industry pioneer Thomas Edison advocated direct current power transmission back in the late nineteenth century, alternating current (AC) became the standard because it was much easier to convert between the very high voltages needed for long distance power lines and the much lower voltages used by ordinary households. AC’s disadvantage is that it loses power during transmission. That’s because the direction of the current oscillates back and forth (hence “alternating”), which consumes a sizeable proportion of power. For a given voltage, an AC system has roughly twice the loss of a DC system.

The UHVDC system, built with the help of multinational companies Siemens and ABB Group, transmits 6.4 gigawatts from Xiangjiaba Dam in Sichuan Province almost 2,000 km to Shanghai, at 800 kilovolts (kV), twice the voltage of typical long-distance systems.

In fact, the UHVDC system can provide up to 10 gigawatts, enough to power nearly 20 million Chinese homes. And this is just the beginning of the big power lines. Earlier this year, Siemens delivered the world’s first 1,100 kV transformer to China, which can carry up to 13 GW, roughly the output of 10 nuclear power plants. “If you want to bridge distances of several thousand kilometers, you simply have to build higher voltage systems,” says Frank Schettler, product life cycle manager of Siemens’ HVDC plus division. 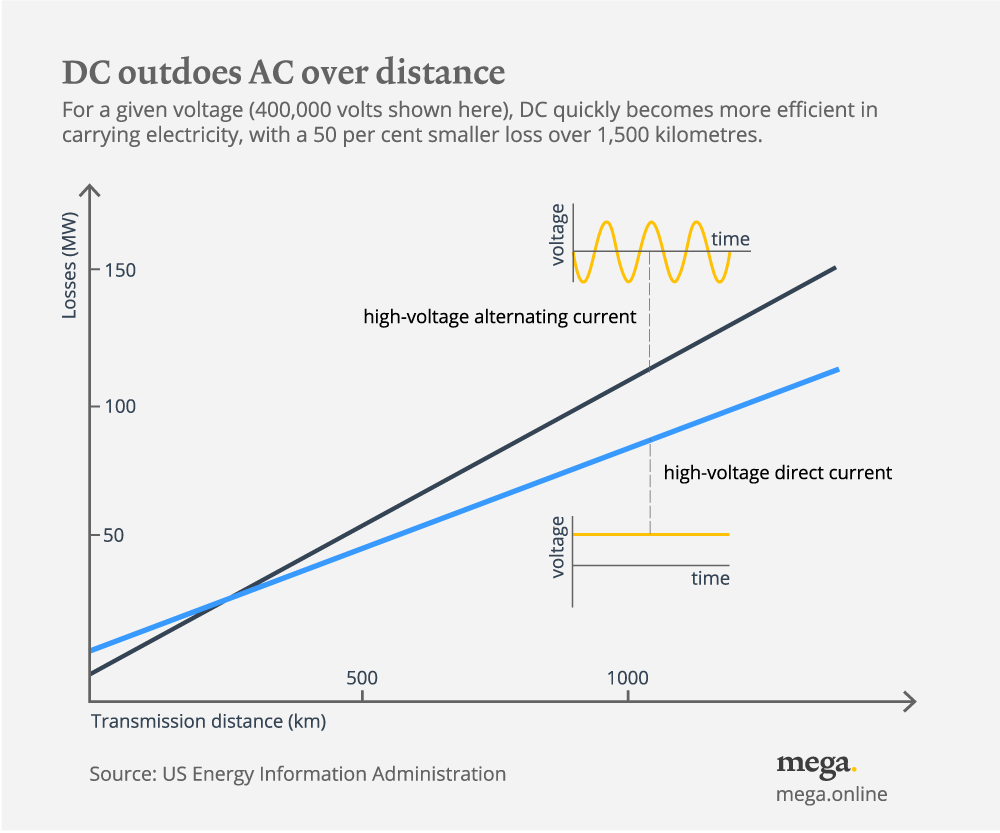 Power to the people

As well as offering better power transmission, some parts of the DC system use less material, making them cheaper and greener. The typical AC system uses six conducting wires, whereas DC uses three, slightly larger wires. Not only does that mean DC systems require less aluminum for their wires, but the towers can be smaller and need less steel because they have less weight to carry—not to mention having a smaller physical footprint.

All these factors bring the cost down.

“When you’re at the 700-mile distance and above, your capital costs for an 800 kV system become much less, compared to an AC system,” says Neil Kirby, HVDC business development manager at GE Power’s Grid Solutions business, which last year helped install the first phase of an 800 kV, 6,000 MW transmission system.

In part, the savings are offset by the cost of building and operating specialist stations at either end that are needed to convert AC to DC and back. These stations can be expensive, in some cases up to $1 billion for the pair, Kirby estimates. And there are variables—such as system design, generation costs and energy prices—that make it difficult to say at exactly what point the UHVDC system becomes cheaper, but it’s already cheaper in some circumstances. 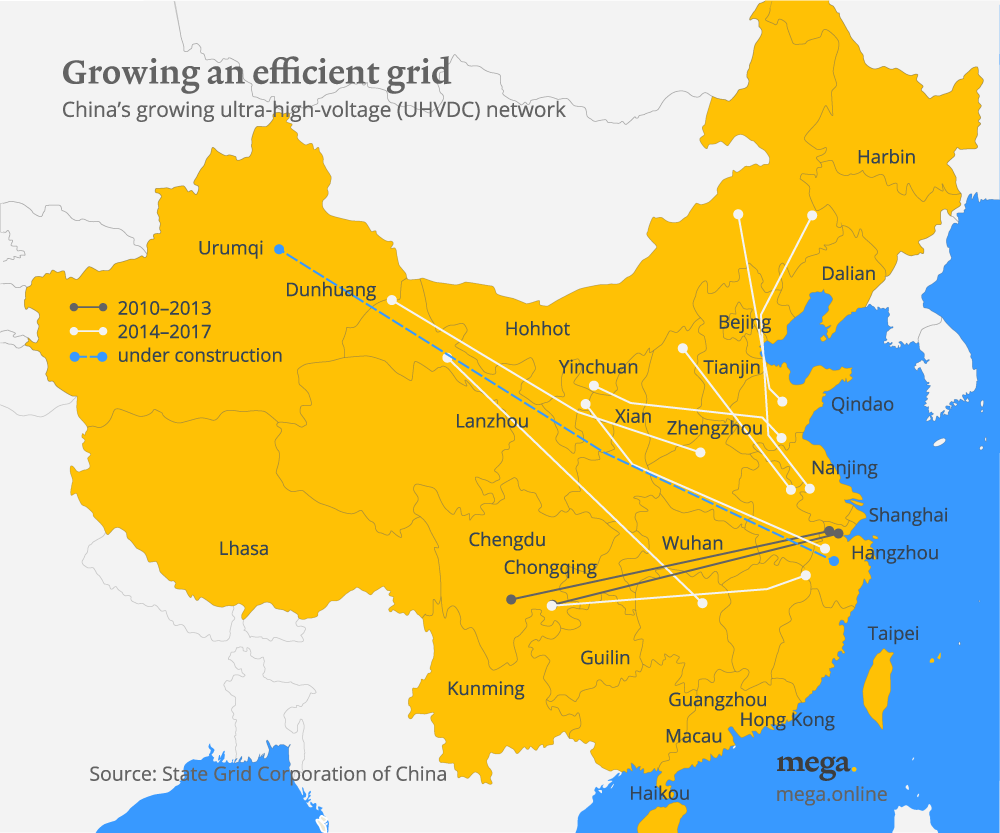 For the moment at least, the most favorable places for UHVDC are the bigger countries that are capable of generating large amounts of power and need to deliver it to cities over great distances. Along with China and India, where the first phase of an 800 kV, 6,000 MW transmission system was installed last year, potential markets include Brazil, which depends on hydropower for more than 75 per cent of its electricity supply and already has a project underway. Most of Brazil’s hydropower is generated in the Amazon in the north, but it’s the cities in the southeast, such as Rio de Janeiro and Sao Paolo, that have the highest demand.

There’s also talk of building UHVDC systems to transmit power from wind farms in the North Sea or solar arrays in the desert. Here, however, the technical challenges are compounded by problems of  crossing jurisdictional lines and the need to forge agreements among separate governments and competing power companies.

Ram Adapa, technical executive in the power delivery and utilization sector at the Electric Power Research Institute, a non-profit organization in Palo Alto, California points to an HVDC project of 600 kV that was planned to transmit power from wind farms in Oklahoma to customers in Memphis, Tennessee. But Arkansas, in between the two states, objected to having power lines strung across it, and earlier this year the US Department of Energy withdrew its support for the project.

Despite that interest in the United States, the future of high voltage DC transmission is in the emerging world.