Standing in a field of corn and dressed in jeans and a flannel shirt rolled up to his elbows, Carl Salvaggio looks every inch the traditional farmer. But the USD85,000 console clasped between his hands suggests his farming techniques are anything but ordinary.

Salvaggio is a professor in digital imaging and remote sensing at the Rochester Institute of Technology, and that the device he’s holding controls a drone with a  hyperspectral sensor and a light detection and ranging (LIDAR) system—all so he can conduct a forensic analysis of his cornfield from a height of 120 metres.

Welcome to the world of smart farming

The robot buzzing overhead doesn’t look much different from a souped-up version of the model airplane that your neighbour’s kid got for his birthday. But its pricy array of equipment captures a vast amount of data. It can reveal which plants are stressed by a lack of water, insect invasion and fungal infection—the typical banes of farmers everywhere.

Salvaggio is developing methods to not only tell farmers which crops are suffering, but to predict which healthy-looking ones are about to become stricken.

This is one aspect of precision agriculture—the ability to apply fertilizer, water or insecticides just where and when they’re needed—but that’s just the start of the technological revolution Salvaggio is part of.

The data that he and others like him are harvesting today already has the power to steer production and influence global food policy.

This growing season, Salvaggio is using his drones to find a unique signature—developed from the sensors on the device—for the white mould (Sclerotinia sclerotiorum) infection in snap beans, a crop worth more than USD1 billion in the US in 2015, according to the country’s Department of Agriculture.

“Once you see that white mould, it’s too late—the plants are done,” he says. “We are looking for a change in reflectance between an uninfected plant and an infected plant, [and] asking: Are these plants showing any change that’s not visible to humans?”

There’s a two-week window between the time when the spores germinate and white mould appears on the plant. During that period, fungicide can stop the infection and save the crop.

“These experiments we are doing today are going to define what agriculture becomes, hopefully, 10 years from now,” Salvaggio says.

So far, regulations for establishing the safe handling of a drone in low-altitude airspace—below about 150 meters—and beyond-visual-line-of-sight (BVLOS) restrict the use of this technology in agriculture. For large farming operations, the ability to conduct BVLOS operations will be crucial.

In 2016, PrecisionHawk, a commercial drone and data company, received experiment permission from the US Federal Aviation Administration (FAA) to fly BVLOS. It helps the US promote regulations that will boost the use of  drones in agriculture.

“We are taking raw data and turning it into transformational business intelligence,” says Thomas Haun,  a PrecisionHawk executive.

Its sensors can already capture about a square centimetre of land per pixel from a height of about 120 meters. And innovation is only likely to gather pace as more tech startups become involved. But there are plenty of hurdles to be overcome. For instance, Salvaggio cites the difficulty of calibrating the data for changes in weather, light, pollen in the air and other sources of distortion.

“This whole industry is very much in its infancy,” says Salvaggio. “Unless they do things correctly, they are going to put themselves out of business.” To him, doing things correctly means getting the right combination of drone and satellite data analytics. A drone can fly under clouds and survey a field on command, but for the big picture over time, nothing beats satellites.

Although satellites cannot collect data as often or at the resolution provided by drones, they deliver the data at a lower cost and face fewer regulatory issues than drones.

Few startups have made as big a splash as Planet Labs, with its fleet of 144 solar-powered CubeSat shoebox-sized satellites orbiting the earth for just over a year. Planet’s satellites employ the same multispectral technology used in drones, passing over and recording data from each patch of earth daily. While the resolution isn’t as fine as what drones can produce, about 3.5 meters square per pixel, it’s a leap forward from previous satellite technology. CubeSat’s satellites can image the earth daily, compared to only once every two weeks from public satellites. Planet is selling access to the data to companies that want to use artificial intelligence and machine-learning algorithms to search for patterns, such as impending drought, deforestation and other changes in land use. 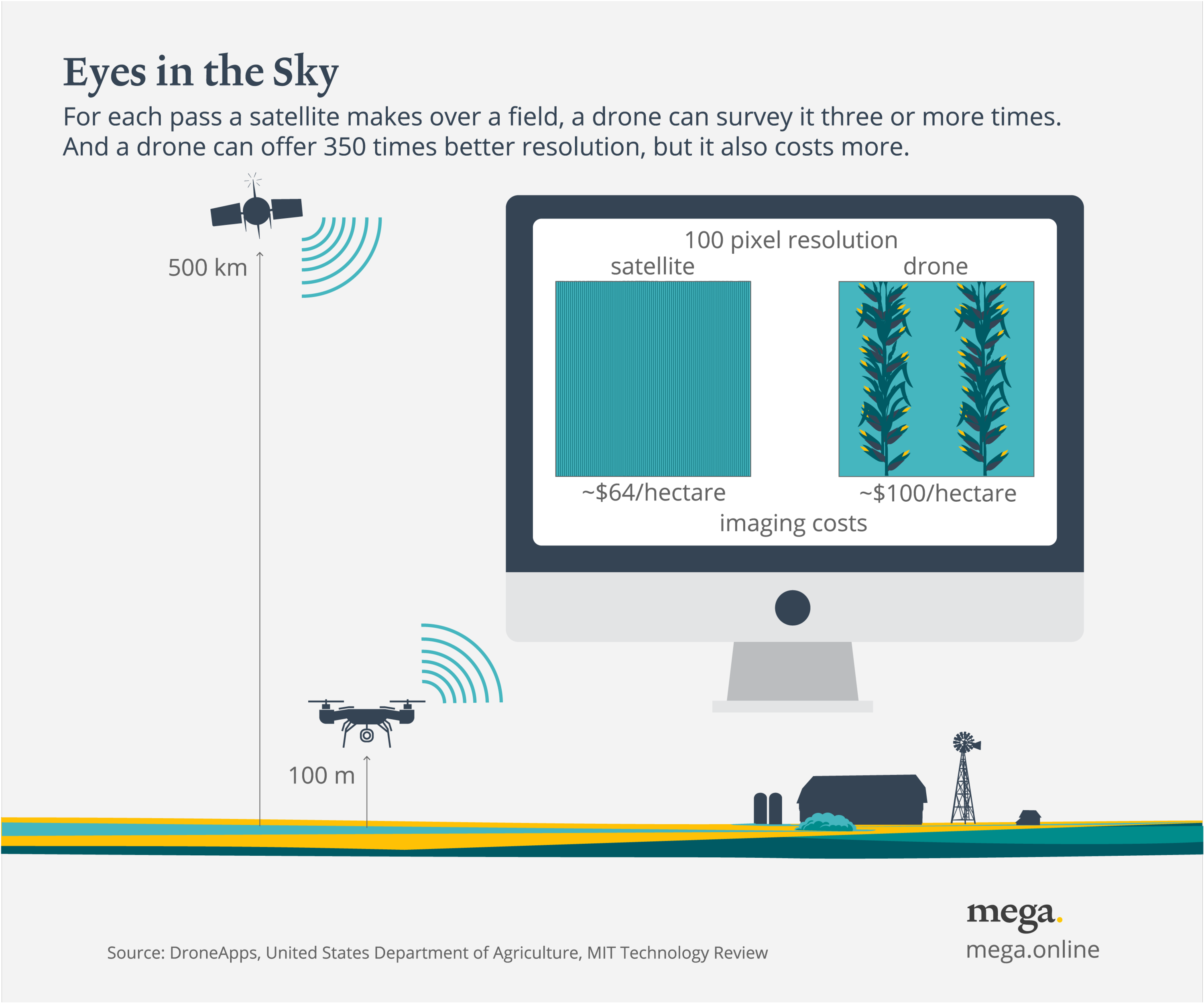 One customer, Descartes Labs is using satellite data to predict large-scale agricultural trends. The founders of the satellite imagery database cut their teeth on vast troves of  astrophysics data at Los Alamos National Laboratory. This experience helped them build a system able to process the entire Landsat satellite data archive in one day, according to Sam Skillman, a computational scientist at Descartes Labs.

“We’re targeting county-level yield numbers for some crops like corn or soybeans…at a rate that really wasn’t possible just a few years ago.”

When Descartes Labs released its 2016 crop forecasts, the price of corn “ended up moving 3 per cent that day,” Skillman says. “It was pretty exciting because it was maybe the first time the market started to pay attention to satellite-imagery analysis of crop production.”

These days, the company uses public satellite data from multiple sources, instead of relying on private satellite data, to prepare crop-report analyses for clients.

“We are in this very rapidly expanding ecosystem of satellite imagery, drone imagery. We haven’t really seen this kind of revolution ever before,” Skillman says.