If green energy is ever to supplant fossil fuels, portable power needs to become more efficient and cheaper. Yet as electronic goods become both more powerful and smaller, batteries are struggling to keep pace. In large part, that’s because it’s increasingly difficult to pack ever more energy into lightweight lithium-ion batteries while also making them less expensive.

“A lot of car companies are producing electric cars that have a range of 200 miles. Costs have dropped, but the biggest problem they’re facing is that the cost of their batteries is still too high,” he says. “[Electric vehicles] are more expensive than comparable cars that run on gas. We have to find a way to decrease the cost of the batteries.”

The problem isn’t confined to cars. It affects houses, too. While there are some areas on the electric grid where lithium-ion batteries can compete on price—such as in California where they cost less than having to build expensive, long-distance transmission lines—these batteries still cost too much for the average homeowner.

“If, say, I want solar on the roof of my house and batteries in the garage, the cost of these batteries has got to be pretty low to make economic sense—in the order of $50 per kilowatt hour, maybe even $30 a kilowatt hour for states with very low-cost electricity,” Srinivasan says. “The trouble is that batteries today cost around $200 a kilowatt hour. Prices have to come down by a factor of four or five.”

The solution is to incrementally improve lithium-ion batteries by finding ways of making them store more energy affordably, while simultaneously innovating with new materials.

One area being explored is solid-state devices, in which the liquid-electrolyte batteries are replaced by solids. For one thing, such devices are safer, Srinivasan says. While liquid lithium-ion batteries can ignite rapidly if they overheat, the more stable solid state versions under investigation represent a return to the past, albeit with a rechargeable twist.

Trying to recharge these solid-state batteries causes the lithium to form dendrites—needle-like structures—that end up short-circuiting the battery, which can heat it up and cause fires. To figure out how to get round the problem it helps to think of dendrites like the roots of a tree.

“You can stop a root from growing: you just put a heavy steel plate next to it—and voila!—you’re done. We could always find mechanically very strong materials to put in a battery and block a dendrite’s growth. The problem has always been that the conductivity through the material used to be so poor,” Srinivasan says.

But a few years ago, researchers in Japan identified sulfite-based glass materials that not only were strong enough to resist the dendrites but also have very high conductivity. These might offer a way around the problem and help to develop rechargeable solid-state lithium batteries.

“We’ve been modelling their mechanical and electrochemical properties to see if we can get the right power densities,” Srinivasan says. “We’ve also done some economic modelling to try to figure out what future batteries would cost. If you can make a lithium-metal battery with a lithium anode and a cathode of sulfite-based glass, which is an inexpensive material, that can get you to a cost of $80 a kilowatt hour.” It’s a crucial threshold: “That’s the number we need for electric cars to have parity with gas cars,” Srinivasan explains. 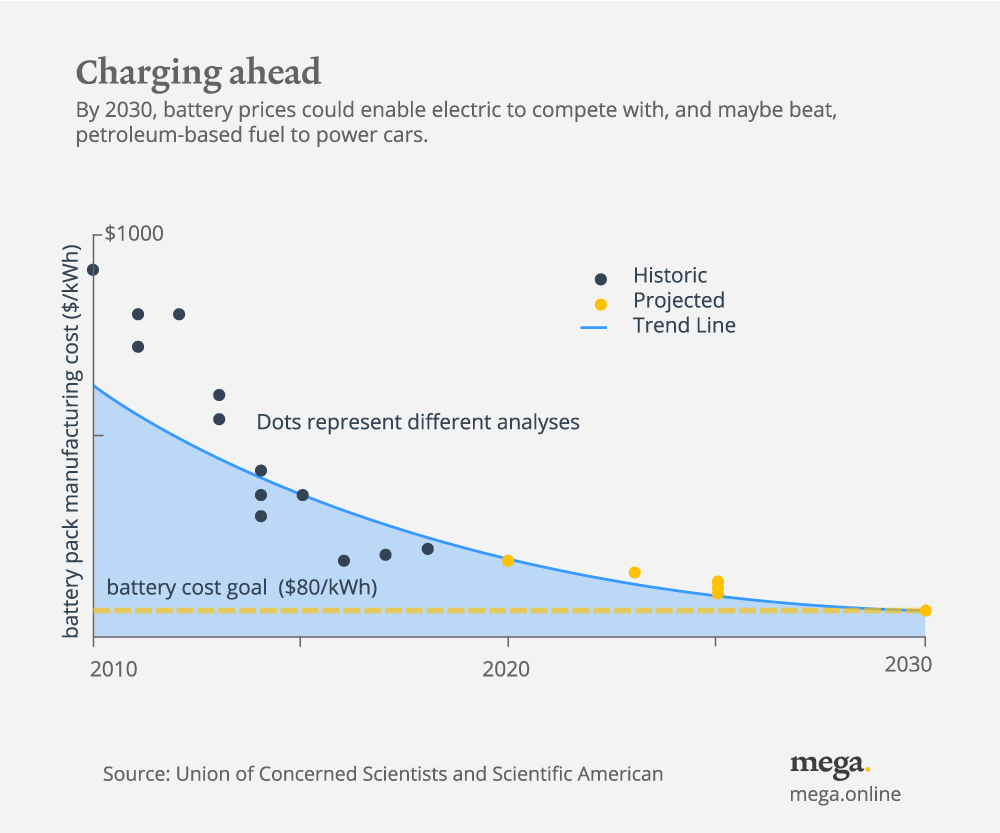 Srinivasan and other researchers are also pursuing other possibilities with exciting potential.

“We’re looking at longer-term R&D projects, like magnesium-ion batteries. Magnesium has a charge of plus two, which means it can store double the number of electrons compared to lithium. That’s a huge advantage when it comes to energy density and maybe even when it comes to cost at the end of the day. But it’s been difficult to find materials that are good conductors for these ions,” he says. “People are also looking at oxygen as a cathode material, but it usually fails after only a few charge-discharge cycles.”

As critical as batteries are to the causes of green energy, battery technology has to be cost-effective to succeed. The trend has certainly been heading in the right direction. But it’ll be a while before batteries can fully compete with fossil fuel as an energy store.