After slipping a thumb-size silicon microprocessor into a small beaker filled with water, Daniel Nocera turns on a light. Instantly, bubbles stream from the chip.

Turning off the light stops the bubbles. It’s a simple demonstration, but one that could promise power for the millions who have least access to it—those  in under-developed countries and remote locations.

But more than just copying nature, Nocera’s technology outdoes it. While the most efficient plants can convert about 1 per cent of sunlight into energy, manmade versions could produce at least 10 times better results—though it’s early days yet.

Considerable work remains to be done before the technology could produce power in a commercially useful way.

Traditional silicon-based photovoltaic cells rely on the photoelectric effect—absorbed light triggering the release of electrons—to generate a current that can power something or charge a battery.

Nocera’s method involves speeding up chemical reactions with a catalyst. In 2011, he and colleagues at MIT developed a cell composed of a silicon sandwich—with a cobalt catalyst on top and a new nickel-molybdenum-zinc alloy on the bottom —that was able to split water into its component parts, hydrogen and oxygen. So far, Nocera’s group has achieved a solar-energy-to-hydrogen efficiency of more than 10 per cent. He expects the efficiency to top out at 15–18 per cent.

Although hydrogen on its own is a fuel, it can be hard to handle. Nocera’s next feat of biomimicry, working with his Harvard colleague Pamela Silver, was to combine the hydrogen with ambient carbon dioxide into liquid fuel using what is effectively a “bionic leaf.”

“Plants take hydrogen in the dark and combine it with carbon dioxide to make fuel” in the form of sugars, he says. “We realised you can take the hydrogen from artificial leaves and then, using the tools of synthetic biology, engineer bacteria”—Ralstonia eutropha—to convert the hydrogen and carbon dioxide to liquid hydrocarbon fuels as well as plastic chemical precursors.

Unfortunately, the nickel alloy in his cell in effect poisoned the bacteria by damaging its DNA. But the problem proved serendipitous. In 2017, Nocera, came up with a replacement, a new cobalt-based catalyst. Except now, rather than generating hydrocarbons, the solar cell converted solar energy into biomass—at a 10-fold greater efficiency than fast-growing crops like switch grass—that could then be converted into fuels like bioalcohols and hydrocarbon fuels with a further stage. 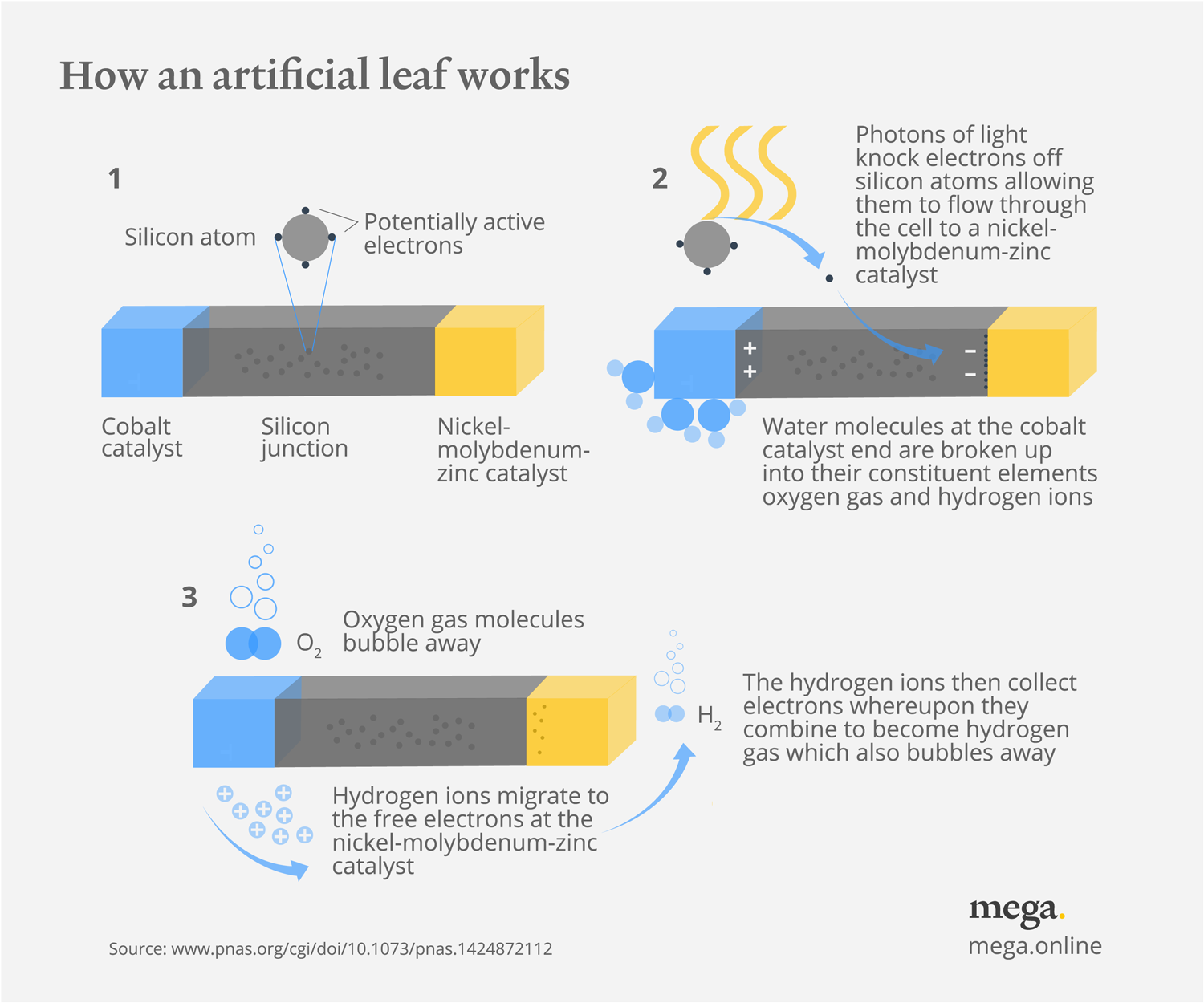 This technology’s commercial applications are, however, probably years away, if not more. There are several hurdles that must be overcome first.

Today’s methods for making hydrogen from an artificial leaf are likely to cost 10 times more than just making it from fossil fuels. To reduce the cost gap, the technology’s developers need to simplify making and installing their systems and to ensure they can last as long as other solar options, which is about 20 years—not always an easy feat.

For instance, producing oxygen from water, makes the solution acidic, which can damage the electrodes and catalysts. Materials that can survive the acidity tend to be expensive. Nocera’s solution was to make his catalysts self-healing. Another possible solution is a thin coating of conducting oxide films—the active ingredient in sunscreen—can protect the electrodes and catalysts, but there’s plenty of work still to be done on other aspects.

The price of making hydrogen from an artificial leaf and fuels from the bionic leaf might not matter as much in places that lack conventional energy infrastructure. In these sorts of places, no matter what approach is taken, fuel will be expensive. Rather than spend on a polluting source of power, like a coal plant, a country could invest in distributed systems powered by artificial photosynthesis. Which is one reason why, Nocera’s  bionic-leaf intellectual property rights were taken up by the Institute of Chemical Technology in Mumbai—India would be an ideal market for this technology.

Eventually, artificial leaves could be the new wave of green energy.