Major carriers are in the process of rolling out ultra-high-speed mobile-phone networks that use fifth-generation (5G) technology, transmitting data up to 50 times faster than current phone networks. But the promise of 5G is that it will provide more than just a boost to our phone service and download speeds. “5G will be one of the more transformative technologies we’ve had so far,” says Karri Kuoppamaki, vice president of radio network technology and strategy at T-Mobile, where he is overseeing the company’s rollout of 5G networks.

There are three differences between 5G and the current 4G: speed, bandwidth and what network specialists call latency, which is the time it takes for data to move from a server on the network to a device. 5G networks are faster, can handle a higher volume of data, and reduce wait times. The new technology is able to shoot data from millions of local sensors or gadgets to distant cloud computers for processing and then return the relevant guidance — all in a fraction of a second. This deluge of data flooding through our society will enable a host of new services, including connecting new devices and equipment.

Sensors themselves can be tinier, cheaper and more durable because of yet another advantage of 5G: smaller batteries. 5G devices stay connected to the network instead of engaging in the back-and-forth signaling that 4G networks require for connectivity, which saps battery life. 5G will power up our daily lives. “We’ll constantly have the information we need to make decisions,” Kuoppamaki predicts. 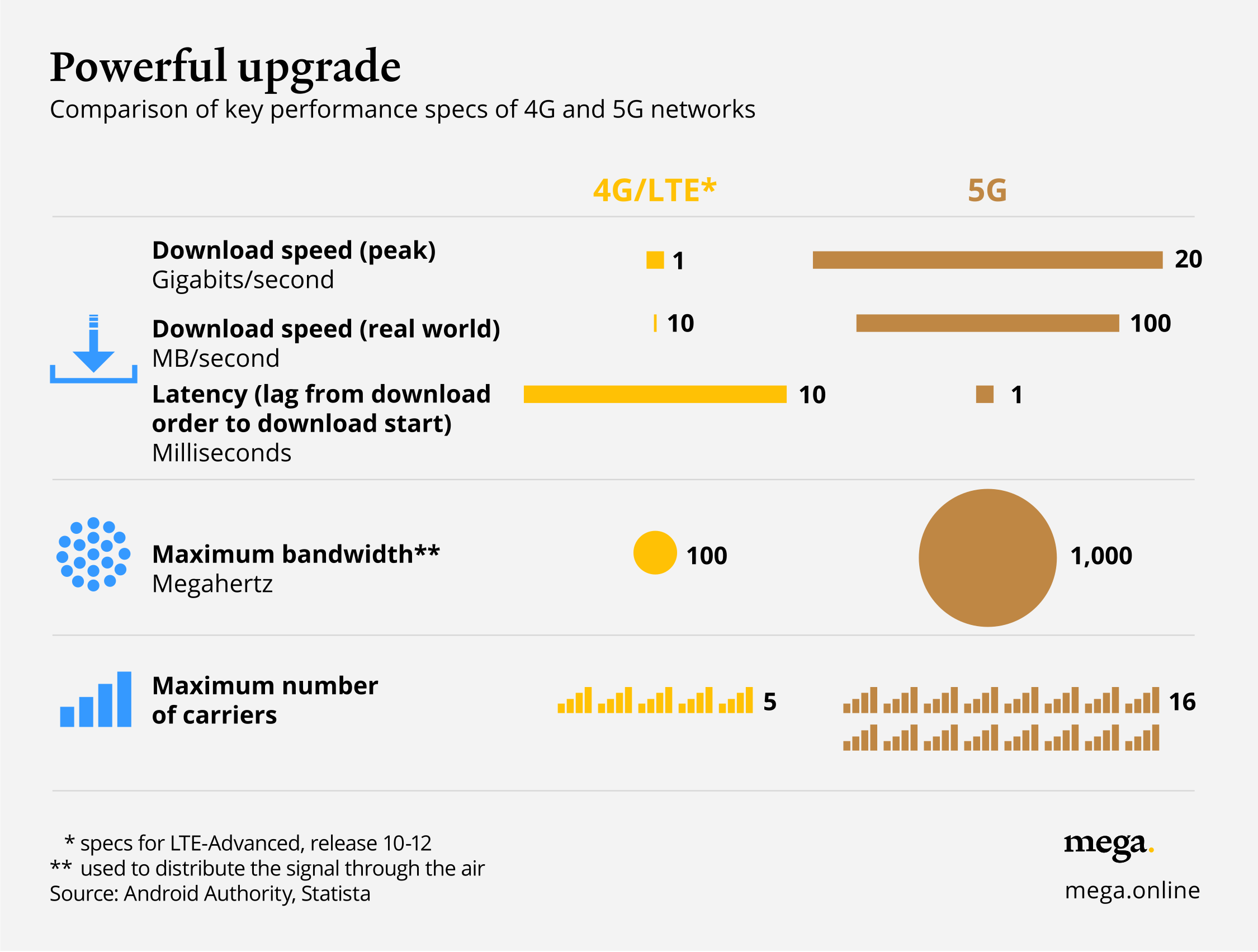 First to feel the 5G benefits

The first 5G networks came online in late 2019 in major cities around the world. That’s more or less in keeping with the pattern of major decadal upgrades in phone-network capabilities. To get a sense of how influential these upgrades can be, consider that the last big upgrade — from 3G to 4G networks around 2010 — drove the proliferation of phone apps that are now integral to our connected culture. “The move to 4G created the app economy, and made Google and Facebook what they are today,” says Kuoppamaki.

The first applications to benefit from 5G will likely be those involving live-streaming video — that is, using a phone to record and transmit an event as it is happening. 5G speeds can cope with 8K image resolution, which entails quadruple the amount of information of ultra-high-definition 4K images and beyond even the capabilities of most TVs. The network also has enough extra bandwidth to simultaneously transmit multiple other video streams, allowing users to switch between camera angles at sporting events, for example, or to pan the viewpoint around 360 degrees.

Other applications certain to get early 5G upgrades include mobile gaming and virtual reality (VR) apps that embed goggle-wearing users in 3D images. These applications will benefit from another aspect of 5G networks. “There’s a misconception that 5G is only about higher speeds,” says Kuoppamaki. “Low latency is a big benefit, too, a more comprehensive, end-to-end measure of data speed than transmission speed.” Gaming and VR apps work best when the images change almost instantly in response to user input, whether it’s swiping on the screen, waving a hand or turning a head. The new 5G networks will reduce latency by 80 percent, providing a near immediate response.

The speed and fast response of 5G networks will also affect the kit: VR goggles, for example, can be sleeker, lighter and less clunky, notes Kuoppamaki. That’s because today those goggles need to provide much of the processing power that turns raw data into actual images. But 5G networks can zip data back and forth quickly enough to mean that much of the processing can move to the cloud.

Closely related to VR is augmented reality (AR), where graphics and text are superimposed on real images. AR, too, will become widespread with 5G, and in many cases essential,  says Kuoppamaki. “Imagine you want to try a little home plumbing to change your faucet,” he says. “You could put on your goggles and let an augmented-reality app walk you through each step under the sink, while you look at your pipes.” 5G-charged VR and AR apps could literally add a new dimension to education and training in almost any domain.

And, of course, there is the Internet of Things, which will surround us with many ‘smart’ items. Around the home, that could be tomato plants in the garden that can ask for water, roofs that warn of weaknesses after extreme weather, jackets that keep parents updated on a child’s location, trash cans that ask to be emptied, and milk cartons that point out expiration dates. In the streets, it’s a heads-up on open parking spaces, second-to-second data on surrounding traffic for driverless cars, local air-quality warnings, icy sidewalk alerts, and much more.

“The Internet of Things will change the way we live and how we interact with the environment around us,” says Kuoppamaki.

Businesses will benefit, too. Industrial robots, drones and driverless trucks will be more responsive to obstacles and fast-changing conditions. Cables will be redundant, even for the most complex computer-controlled machines, making them easier to move around. Businesses will be free to reconfigure the factory floor in response to product changes or fluctuations in customer orders. “Today, it’s hard for factories to change quickly,” says Kuoppamaki. “If you can make equipment more mobile, you can reduce the time to market.” What’s more, he adds, sensors in the machinery will constantly feed remote AI software with the monitoring data it needs to self-adjust in response to variations in product quality, and to judge when the equipment requires preventive maintenance to avoid down-time and more expensive repairs.

The 5G transformation won’t happen overnight, warns Kuoppamaki. The first wave of sophisticated applications are likely three or more years away. Cost may be a temporary barrier, too because currently, the only phones that can access 5G networks are top-of-the-line new models.

But the initial benefits, mostly those relating to speeding up existing applications, are already arriving.

“Like all new technologies, adoption starts in the high end, and then makes its way down,” he says. “It will only take a few years before we see 5G everywhere.”

Read more about other technological advances on Mega.online. Mega seeks to energise and enrich the debate over how to create a better functioning economy and society with articles and videos featuring leading academics, scientists and entrepreneurs active in the fields of sustainability, technology, health, alternative energy and agriculture.