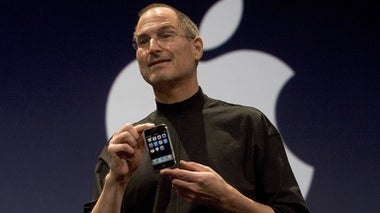 The Puzzle of Pancreatic Cancer: How Steve Jobs Did Not Beat the Odds—but Nobel Winner Ralph Steinman Did

Despite having the same name, the diseases that killed Apple co-founder Steve Jobs and 2011 Nobel laureate Ralph Steinman are different kinds of cancer. Researchers are looking for new ways to diagnose and treat both...

Some friends of Scientific American wrote to us expressing their appreciation of the life of one of the great inventors and technology visionaries. Here are some of their thoughts and reflections...

The Highlights (and Lowlights) of Apple's Steve Jobs Era

Apple has been on a decade-long roll starting with the its game-changing MP3 music player—the iPod— in November 2001 right through its monumental, if brief, climb earlier this month to become the most valuable U.S...

Thank you for the new way to fingerpaint, Steve.

Thank you for the new way to fingerpaint, Steve.Sketch done on my iPod Touch, using the Sketch Club app, my fingertip, and my gratitude for inspiring this new way to make artwork...

Steve Jobs: A Genius, Yes; A Role Model for the Rest of Us, No Way

The nearly three weeks since Steve Jobs’s death has been like an extended tribute to the first global head of state. The memorial ceremonies worldwide, the special commemorative issues and, today, the release of Walter Isaacson’s Steve Jobs , all bear testament to the Apple founder’s legacy...

Apple Computer co-founder and CEO Steve Jobs has announced his resignation, according to a statement issued by the company.In the statement, Apple announced that Jobs, who co-founded Apple with Steve Wozniak in 1976, stepped down August 24 and will be replaced at Jobs's suggestion by chief operating officer Tim Cook."Steve's extraordinary vision and leadership saved Apple and guided it to its position as the world's most innovative and valuable technology company," Art Levinson of Apple's board of directors said in the statement...

How Might Steve Jobs's Liver Transplant Be Affecting His Health?

Apple CEO Steve Jobs today told staffers in an email that his failing health has forced him to temporarily step down and hand over his daily duties to a surrogate.

Computer executive posts statement to quell questions on his condition

Big Progress on the Little Things

Apple's iTunes software has been heralded for the past decade as an example of an application that almost exemplifies what cloud computing is all about.

The Crazy One - A Steve Jobs Tribute

Last week a few of my twitter pals and I had a conversation about how we are proud to describe ourselves as 'crazy' and 'ridiculous'. Sparked by Mark Changizi's article at the Huffington Post on 'What to do about all the crazy, ridiculous research' out there, the general consensus was that sometimes what seem to be the most outlandish ideas are the ones that lead to the biggest advancements in science and elsewhere...

On tiny keypads and greasy touch screens, doctors, nurses, NPs and physicians assistants these days are doing a lot more than checking email and phone messages.

A medical smart phone app that allows doctors to view and assess medical images has been approved by the U.S. Food and Drug Administration for the first time.

iPhone 4S Unveiled with Fast iPad Chip, 8-Megapixel Camera, but No iPhone 5 Yet

Could Apple's media event Tuesday at the company's Cupertino, Calif., headquarters possibly live up to the hype preceding it? Put it this way: if you're an Apple fan you'll probably love the tweaks that the company has made to iOS5 to better integrate the iPhone and iPad and their apps...

Apple introduces the iPad and iBooks

What do you know? McGraw-Hill CEO Harold McGraw was on the money yesterday when he said Apple would announce a tablet on Wednesday. The iPad now has officially arrived, weighing in at less than a kilogram, with a 25-centimeter LED-backlit display that is just over a centimeter thick...

20 Solar Apps for Your iPhone

The iPhone seems like the perfect accessory for a solar power enthusiast. Right now, you have to navigate a maze of websites such as PV Watts to calculate how much energy you can expect to produce and how many years a solar array will take to pay itself off...

How Toxic Is Your iPod?

What is the environmental impact of the Apple products you throw away?

The Origin of the Computer Mouse

Now an endangered species, it was crucial to the development of personal computing and the Internet

Optimism and Enthusiasm: Lessons for Scientists from Steve Jobs

Steve Jobs, cofounder of Apple Computers who died this week, had a reputation as a passionate business leader and a modern folk hero. In 1999 one of Jobs’s friends said, “He is single-minded, almost manic, in his pursuit of excellence.” That’s certainly a character trait we scientists can admire.Let’s take a look at another one of Job’s traits that we scientists can benefit from emulating...

Like others, I learned of Jobs' passing on an Apple device. S and I were just on our way out the door to pick up dinner when I hit the Facebook app on my iPhone.

A Video Moment of Silence for Steve Jobs

Pancreatic cancer is notoriously deadly, killing some 95 percent of patients within five years of diagnosis. Actor Patrick Swayze died less than two years after he was diagnosed with the invasive disease...

Why Is Pancreatic Cancer So Deadly?

4 Companies You Love to Hate: Apple, Microsoft, Google and Facebook

The reasons why, and some reasons why it might be worth cooling our collective jets about them