The Extraordinary Story of the White Star Liner Titanic

The great steamship sank 100 years ago, but its legendary drama, heroes and villains remain as unforgettable as ever

Detailed maps of the debris field, high-definition images and online gaming technology could lead to virtual expeditions to the Titanic site 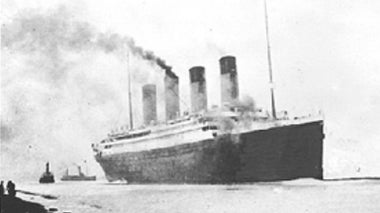 From the great ocean liner's construction to its sinking to its discovery on the ocean floor, the key moments in the Titanic's history. See our full centenary coverage here

Better technology and vigilant monitoring have made the oceans safer, but fatal accidents continue to occur

The Science behind the Iceberg that sank the Titanic

Is It Possible to Build an "Unsinkable" Ship?

As the Titanic's sinking and Costa Concordia's grounding demonstrate, no amount of engineering can completely compensate for human error

The Real Heart of the Ocean

One hundred years ago, a ship sideswiped an iceberg on its way across the ocean, and the Titanic legend was born. Speaking of legend, James Cameron's film was so sweeping and dramatic that some folks think it must have been entirely fictional...

How did Titanic really break up?

Hello, everyone!I'm a member of the Marine Forensics Committee, and author or co-author of three peer-reviewed papers on the “Titanic”. My most recent paper, “The Breakup Of Titanic – A Re-Examination of Survivor Accounts”, was presented at the First International Marine Forensics Symposium on April 4.Working with Roy Mengot (with whom I co-authored one paper), I've been gathering evidence to support a reconstruction of the breakup of the “Titanic” that differs somewhat from the one you may have seen in movies or in other publications...

A century ago a great ship struck an iceberg and sank, earning a permanent place among the stories we tell—and lessons we should learn

Titanic and the Science of Near-Death Experiences

Raise It or Raze It?: How Will the Stranded Italian Cruise Ship Be Salvaged?

Possible methods to move the massive Costa Concordia, twice as big as the Titanic, include multiple cranes, inflatable bags and even buoyant objects like ping-pong balls used by Donald Duck...

In for the Long Hull: It Will Take Weeks to Drain the Costa Concordia's Fuel

Italy's coast guard suspended the search for people on the Costa Concordia today after the ship slipped farther into the Mediterranean.

From the Archive, 1912: Wreck of the White Star Liner Titanic

How the world's greatest steamship went down with 1,600 souls

The destruction of the Titanic, started by a huge iceberg, will be finished by tiny, iron-eating bacteria. Karen Hopkin reports

From the Archive, 1912: What We Know About Icebergs

How they are formed; Their characteristics; How they drift; Precautions taken to protect shipping against them

From the Archive, A View from 1912: Scientific American on the Loss of the Titanic

A Titanic Flashback: A Twitter Timeline of the Disaster

Can't stay up to follow all the #Titanic_SA tweets? Here are they are, all collected