The human brain naturally produces and processes compounds closely related to those found in Cannabis sativa, better known as marijuana [see "The Brain's Own Marijuana," by Roger A. Nicoll and Bradley E. Alger. These compounds are called endogenous cannabinoids or endocannabinoids. As the journal Nature Medicine put it in 2003, "the endocannabinoid system has an important role in nearly every paradigm of pain, in memory, in neurodegeneration and in inflammation." The journal goes on to note that cannabinoids' "clinical potential is enormous." That potential may include treatments for pain, nerve injury, the nausea associated with chemotherapy, the wasting related to AIDS and more.

Yet outdated regulations and attitudes thwart legitimate research with marijuana. Indeed, American biomedical researchers can more easily acquire and investigate cocaine. Marijuana is classified as a so-called Schedule 1 drug, alongside LSD and heroin. As such, it is defined as being potentially addictive and having no medical use, which under the circumstances becomes a self-fulfilling prophecy.

Any researcher attempting to study marijuana must obtain it through the National Institute on Drug Abuse (NIDA). The U.S. research crop, grown at a single facility, is regarded as less potent--and therefore less medicinally interesting--than the marijuana often easily available on the street. Thus, the legal supply is a poor vehicle for studying the approximately 60 cannabinoids that might have medical applications.

This system has unintended, almost comic, consequences. For example, it has created a market for research marijuana, with "buyers" trading journal co-authorships to "sellers" who already have a marijuana stockpile or license. The government may also have a stake in a certain kind of result. One scientist tells of a research grant application to study marijuana's potential medical benefits. NIDA turned it down. That scientist rewrote the grant to emphasize finding marijuana's negative effects. The study was funded.

Some may argue that researchers do not need to study the drug--after all, there is Marinol, a synthetic version of marijuana's major active compound, tetrahydrocannabinol, or THC; it relieves nausea and stimulates appetite. But patients are often disappointed with Marinol as compared with marijuana. A 1997 editorial in the New England Journal of Medicine noted that "it is difficult to titrate the therapeutic dose of this drug, and it is not widely prescribed. By contrast, smoking marijuana produces a rapid increase in the blood level of the active ingredients and is thus more likely to be therapeutic."

The reasonable course is to make it easier for American researchers to at least examine marijuana for possible medical benefits. Great Britain, no slacker in the war on drugs, takes this approach: the government has authorized a pharmaceutical firm to grow different strains of marijuana for clinical trials.

This call for marijuana research is not a closet campaign for drug legalization--easing research barriers would not require that marijuana be reclassified, nor would it have any bearing on individual states' decisions to approve limited use of medical marijuana. As a 1995 editorial in the Journal of the American Medical Association said, "We are not asking readers for immediate agreement with our affirmation that marijuana is medically useful, but we hope they will do more to encourage open and legal exploration of its potential." After almost a decade of little progress, we reiterate that sentiment. 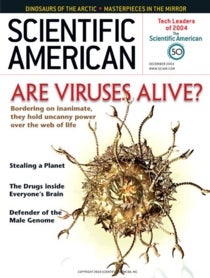