The mood at Bäckaskog Castle in southern Sweden should have been upbeat when chemists and physicists gathered there for a symposium in May 2016. The meeting, sponsored by the Nobel Foundation, offered researchers a chance to take stock of global efforts to probe the limits of nuclear science, and to celebrate four new elements that they had added to the periodic table a few months earlier. The names of the elements were due to be announced within days, a huge honour for the researchers and countries responsible for the discoveries.

Although many at the meeting were thrilled with how their field was developing—and the headlines it was generating—a significant number were worried. They feared that there were flaws in the process of assessing claims about new elements, and were concerned that reviews of the recent discoveries had fallen short. Some felt there was not enough evidence to justify enshrining the most controversial elements, numbers 115 and 117. The scientific integrity of the periodic table was at stake.

Towards the end of the meeting, one scientist asked for a show of hands on whether or not they should announce the elements’ names as planned. The question exposed the depth of concern among the crowd. Most researchers voted to delay the announcement, says Walter Loveland, a nuclear chemist at Oregon State University in Corvallis. And that triggered a remarkable reaction from some of the Russian scientists who had led efforts that resulted in three of the elements. “They just stomped their feet and walked out,” says Loveland. “I’ve never seen that in a scientific meeting.”

Despite the concerns, the elements’ names were announced soon after. Nihonium (atomic number 113), moscovium (115), tennessine (117) and oganesson (118) joined the 114 previously discovered elements as permanent additions to the periodic table. Nearly 150 years after Dmitri Mendeleev dreamed of this organizational structure, the seventh row of the table was officially complete.

Yet the way in which events played out deeply upset some researchers. Claes Fahlander, a nuclear physicist at Lund University in Sweden, expects that experimental results will eventually support the claims for moscovium and tennessine. Nevertheless, he maintains it was “premature” to approve the elements. “We are scientists,” he says. “We don’t believe—we want to see proof.”

As the world prepares to celebrate the International Year of the Periodic Table in 2019, debate over the four additions has forced reforms to the process for verifying other new elements in the future. And the controversy has cast a cloud of uncertainty over the bottom row of elements: it is possible that the table’s governing bodies might reassess some of the latest discoveries.

Part of the controversy stems from a rift between some chemists and physicists over who should be the legitimate custodians of the periodic table. Chemists have historically occupied that role, because they discovered the naturally occurring elements through chemical techniques over centuries of work.

For the past several decades, however, nuclear physicists have led the hunt for new elements—creating them artificially by smashing atomic nuclei into targets (see ‘How to create an element’). It can take years to produce just one atom of these superheavy elements, which are also notoriously unstable, splintering through radioactive decay in sometimes fractions of a second. So, as groups have vied to be first to create the next elements, it has become more difficult to establish proof of their discoveries. 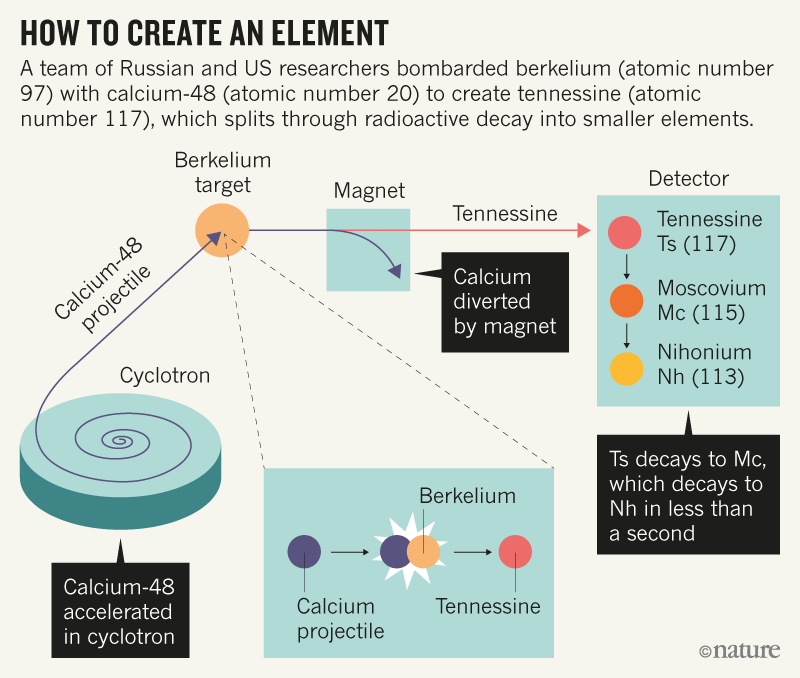 Responsibility for approving or rejecting new elements lies with two sister organizations: the International Union of Pure and Applied Chemistry (IUPAC) and the International Union of Pure and Applied Physics (IUPAP). Since 1999, they have relied on the judgement of a panel of experts known as the joint working party (JWP), chaired by Paul Karol, a nuclear chemist and emeritus professor at Carnegie Mellon University in Pittsburgh, Pennsylvania. Re-established periodically to assess claims for discoveries as they arise, the latest version of the JWP assembled in 2012 and disbanded in 2016. It consisted of Karol and four physicists.

During that time, the group awarded credit for the discovery of elements 115, 117 and 118 to a Russian–US collaboration led by veteran nuclear physicist Yuri Oganessian of the Joint Institute for Nuclear Research (JINR) in Dubna, Russia. And the panel assigned element 113 to researchers at the RIKEN Nishina Center for Accelerator-Based Science near Tokyo.

The JWP’s decisions were announced publicly on 30 December 2015, when IUPAC issued a press release trumpeting the discoveries of the four new elements (which had not yet received their formal names). Union officials said they had worked quickly to broadcast the decisions. In fact, they made the announcement before the union’s executive committee could approve the JWP’s conclusions, as is specified by the union’s published rules; that approval came the following month. More controversially, the JWP’s findings hadn’t even been shown to the physics union, IUPAP, which had expected to see them, says Bruce McKellar of the University of Melbourne in Australia, who was IUPAP’s president at the time.

That omission inflamed pre-existing tensions between the two unions. Cecilia Jarlskog, a physicist at Lund University and IUPAP president before McKellar, claims that, for years, the chemistry union has unfairly dominated the process of assessing discoveries. (Karol told Nature that in preparing the JWP’s reports, he liaised almost exclusively with the chemistry union.) Venting her frustration at the 2016 Swedish meeting, she accused IUPAC of trying to steal the limelight by announcing the discovery on its own, and argued that only physicists “have the competence” to assess claims, according to the published version of her presentation.

On this occasion, tensions in the physics and chemistry communities were heightened by criticism over the JWP’s assessment of claims for elements 115 and 117. The JWP backed the conclusions of the team that discovered these elements, which found that chains of radioactive decay from elements 115 and 117 matched up in a way that bolsters the evidence for both discoveries. But this kind of ‘cross-bombardment’ analysis is notoriously tricky for odd-numbered elements. Fahlander and his co-workers at the University of Lund report that the match-up is highly unlikely to exist for 115 and 117—a concern brought to the attention of the JWP in February 2015.

Panel member Robert Barber, a nuclear physicist at the University of Manitoba in Winnipeg, Canada, says that although he and his colleagues “were very concerned” about cross-bombardment, they concluded there was no alternative to this type of evidence, and they reached consensus on all their decisions. Loveland also supports the overall decision. And even if the latest JWP got some details wrong, he says, history shows that its decisions are unlikely to be reversed.

However, Dubna nuclear physicist Vladimir Utyonkov takes aim at the JWP. Although he disagrees with the Lund group’s argument about cross-bombardment and is confident that the Russian–US claim is robust, Utyonkov maintains that the panel lacked “high-level” experts in heavy-element synthesis, and says that its draft reports contained numerous errors. Karol defends the work that he and his colleagues did as part of the JWP, saying that they tried to abide by the published criteria governing the assessment process. Overall, he says, “I believe the committee was extremely comfortable with its report”.

But it seems that most delegates at the 2016 meeting in Sweden were critical of the JWP. David Hinde, a nuclear physicist at the Australian National University in Canberra, asked the 50 or so researchers present whether they thought the panel’s findings were “scientifically satisfactory”. He says that he got very few positive replies to that question.

Despite the various concerns, IUPAC and IUPAP went ahead in June 2016 and announced the names of the four new elements. McKellar admits that he had doubts about doing so, but says that most of the physicists and chemists he consulted told him that the JWP’s overall conclusions—if not all of the details of their analyses—were probably sound.

Jan Reedijk, then president of IUPAC’s inorganic-chemistry division, says that the initial announcement was made early to avoid press leaks and to satisfy demands from the claimant labs, which were eager to get the news out. To enable that, he says, he quickly approved the JWP’s findings in December 2015 on behalf of his division, after it had been peer-reviewed and accepted for publication in the union’s journal Pure and Applied Chemistry. “I noted that the proper refereeing had been done, so gave my ‘yes’ in less than an hour,” he says.

However, it is unclear whether a truly independent review took place. According to the chemistry union’s executive director Lynn Soby, the JWP’s work was reviewed in a two-step process before the announcement. First, its findings went to several labs, principally ones involved in the latest discoveries as well as another reviewer suggested by one of the labs. Then the JWP’s reports were sent to members of the chemistry union’s committee on terminology, nomenclature and symbols.

Soby says that the committee’s job was to check wording and formatting errors, and that therefore it was down to the labs themselves to provide scientific scrutiny. She says that was appropriate, given that they are the experts in that field. Yet one of those researchers, Utyonkov, thought that the chemistry union had recruited 15 independent experts to do the scientific review. He assumed that he and two Dubna colleagues had been asked to check only facts and figures in the reports. “I don’t know how we can be considered as independent referees,” he says.

Looking back, Jarlskog wishes that she and the rest of the physics community had paid closer attention to how the entire assessment process was completed, particularly the refereeing of the JWP’s conclusions. “I am going to have nightmares about how negligent we have been.”

To address the concerns raised, the two unions have agreed on new procedures for assessing any future elements. According to the amended rules, which were released in May (see go.nature.com/2ji1gv4), the presidents of IUPAC and IUPAP will now each get the chance to review the JWPs findings before announcing their conclusions together. To do so, they will carry out an independent peer-review process alongside that of Pure and Applied Chemistry.

McKellar says that the changes will have a positive effect. “Each union has developed a good bit of trust working together on this,” he says.

But those changes won’t satisfy some critics, such as Jarlskog. “I just don’t think that the new rules will change anything,” she says.

This article is reproduced with permission and was first published on June 13, 2018.

The Evolution of the Periodic System

How to Make Superheavy Elements and Finish the Periodic Table [Video]