After engineers run a months-long setup of the Mars Science Laboratory, now parked in a crater, scientists will take the rover on a nearly two-year journey that includes a visit to a six-kilometer-high mountain...

The elaborate landing of the $2.5-billion mission went off without apparent incident 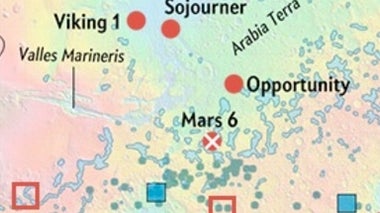 Mapping Mars: Where Have All the Landers Gone? [Interactive]

The first man-made object to land on Mars arrived 40 years ago this month, and NASA's Curiosity rover should soon depart for the Red Planet. Here is a look at where humankind's many Mars landers have touched down, and where the planet betrays a history of all-important liquid water...

Planetary science is NASA's most successful and inspirational program. It should not be gutted

Curiosity Rover Zeroes In on Traces of Past Habitats on Mars

At 10:31 P.M. Pacific time on August 5, NASA's Curiosity rover will begin the first direct search for habitable environments on Mars

Welcome to The Countdown, the Scientific American show that counts down the five coolest things happening now in space news.Episode 1: July 26, 2012 Story 5 Galaxies from the early universe usually look kind of lumpy or blobby, but scientists have spotted one with a spiral structure, making it look a lot like our own Milky Way galaxy.See Primordial Pinwheel: Astronomers Spot Oldest Prominent Spiral Galaxy Yet...

From Space to Soil in 7 Minutes [Slide Show]

Skiing To Mars: The Original Rovers

Prime real estate. The landing zone for Curiosity (NASA/JPL) As the world waits with bated breath for NASA's Curiosity rover to attempt a safe landing on Mars on August 6th (EDT), it's interesting to recall the rovers of times past...

The Mars Phoenix mission revived hopes that the Red Planet may be habitable, preparing the way for a new rover to be launched this month

THE WOODLANDS, Texas—Planetary scientists, usually an affable lot, are plenty riled up at the moment.The field is bristling at cutbacks, proposed last month by the Obama administration, to planetary science and especially to NASA's program of robotic Mars explorers...

NEW YORK CITY—"Beyond Planet Earth," the slick new exhibit on space exploration at the American Museum of Natural History, is thoroughly modern. It has an augmented-reality iPhone app that produces hovering, three-dimensional animations...

The Martian rovers Opportunity and Spirit have represented optimism, hope, and even cuteness to millions of people dreaming about discoveries on the red planet.How appropriate then, that the newest rover, Curiosity, should carry a sundial with sentiments and illustrations worthy of classic children's literature.Curiosity blasted off aboard an Atlas 5 rocket on November 26th, and is currently heading for Mars with an August 2012 landing date.In addition to the lovely illustration above, Curiosity is also carrying this sundial, with the name Mars in 16 different languages, including ancient Sumerian, Inuktitut and more around the edges:You may remember space artist Jon Lomberg from a previous Symbiartic post, Alone in the blogiverse: where are all the space-art bloggers?...

The sale is a protest of plans in President Obama's 2013 budget request to cut 21 percent from NASA's planetary science budget, and 38 percent from its Mars projects

The Long Hard Road to Mars

Sky Crane - how to land Curiosity on the surface of Mars

On 26th November 2011 at 15:02, NASA launched its Mars Science Laboratory mission. MSL is the latest in the organization’s nearly four decade long robotic presence on the red planet.

Curiosity Across the Stars

This is not a comet, it's Curiosity on its way to Mars This, I guarantee, is a view of NASA's Curiosity rover embarking on its 250 day trip to Mars that you may not have seen before...

Wet Down: Warm, Wet Conditions on Ancient Mars May Have Been Confined to Subsurface

Mars has plenty of minerals that suggest a watery past, but that does not mean that the Red Planet once looked like Earth

Now that NASA's "seven-minutes of terror" have passed safely, the Mars Curiosity rover's exploratory mission is off and running. Over the next two years—probably more, if it's anything like the Opportunity or Spirit rovers—the Jeep-sized rover will explore its new home using a variety of tools...

Two Mars missions are scheduled to launch this month. How have their predecessors fared? Find out more in Exploring the Red Planet

The Curiosity rover is set to begin exploring Mars on August 6. But first it has to land. John Matson reports