Body Mass Index (BMI) is a mathematical formula that divides a person's weight by the square of their height to arrive at a number that falls into one of these bodyweight categories: 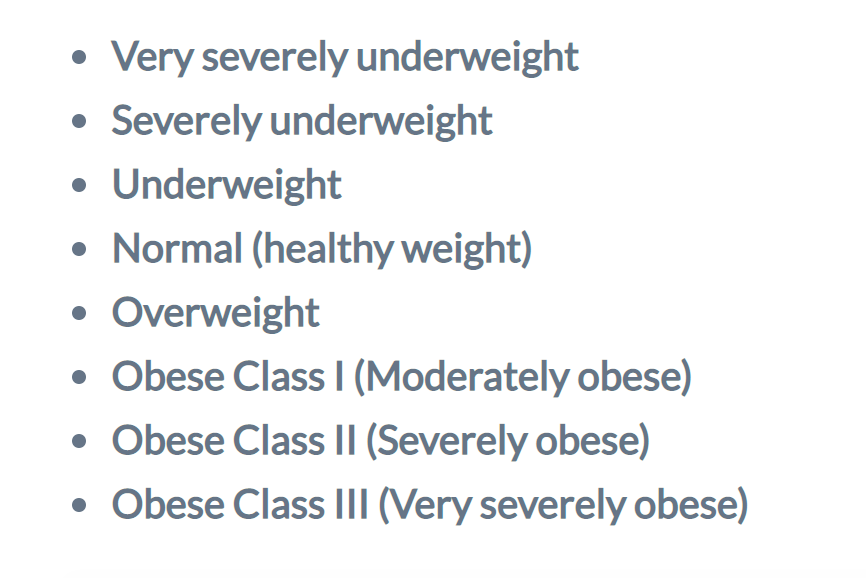 Beyond assigning one of these categories, a high BMI can be also an indicator of high body fat and therefore can be used to screen for certain weight levels that could lead to health problems. Even though it is often used as one, it is not a true diagnostic of body fatness or of an individual’s overall health.

As most of us fitness-focused folks have likely heard, BMI is far from a perfect measurement. Much of the time, and often when it really counts, the BMI measurement may actually overestimate or even underestimate a person’s body fat. And when it does, it really does.

Where Does BMI Go Wrong?

A common example that people use when talking smack about BMI is that it doesn't distinguish between body fat and muscle mass, which is important because a hunk of muscle weighs more than the same size hunk of fat.

Some good examples of this misinterpretation, according to an analysis of BMI’s Blind Spots, are former Olympians Usain Bolt and Michael Phelps, who just narrowly miss the 'overweight' camp. Then there is star NFL quarterback Tom Brady who’s BMI categorizes him as obese. Also basketball player Lebron James and NHL right winger, Phil Kessel, both have a BMI of 27.5 and as we will learn later, a BMI between 25-29.9 is considered overweight.

How does this kooky error happen? Well, imagine a sedentary person who is six feet tall and weighs 203 pounds. They would have a BMI of 27.

Now, imagine a sprinter who is also six feet tall but weighs 211 lbs. They would have a BMI of 28.

A glob of muscle weighs about 18 percent more than the same size glob of fat.

So, according to the BMI, the sprinter is more overweight than the sedentary person. But as I said earlier, a glob of muscle weighs about 18 percent more than the same size glob of fat, so this is clearly not an accurate statement.

This isn’t the only place where BMI falls apart either. BMI is also not reliable to use on elderly adults, who generally have lost some amount of muscle and bone mass. In this case, an elderly person’s BMI could be within a normal range while they might actually be overweight.

It’s also important to mention that the BMI calculation is based primarily on Caucasian body types and may not be appropriate for people of other ethnicities. When compared to white Europeans of the same BMI, Asians appear to have a four percent higher total body fat. South Asians, in particular, have especially high levels of abdominal obesity, which can throw off the BMI measurement as well.

Does BMI Correlate to Health?

A person whose BMI says they are overweight, or even obese, is generally considered unhealthy, while people with normal BMI are generally categorized as healthy. But research published in 2016 suggested that this was incorrect for 75 million Americans.

Researchers found that 54 million Americans had been classed as overweight or obese, but with further investigation, they found that other cardiometabolic measures (blood pressure, blood sugar, cholesterol, etc.) showed they were actually perfectly healthy. Another 21 million people were classed as "normal" in terms of BMI but were later determined to be unhealthy based again on those other cardiometabolic measures.

To determine this, the researchers examined data from the U.S. National Health and Nutrition Examination Survey and analysed the link between BMI and a range of other normal health markers (like blood pressure, blood sugar, and cholesterol) and found that BMI incorrectly pegged people's health at both ends of the weight scale.

Other scientists, however, have suggested that although some people may appear to be overweight but healthy, the extra weight still puts them at higher risk of certain diseases as they get older. So there is some dissention in the ranks.

»Continue reading “Is BMI an Accurate Way to Measure Body Fat?” on QuickAndDirtyTips.com